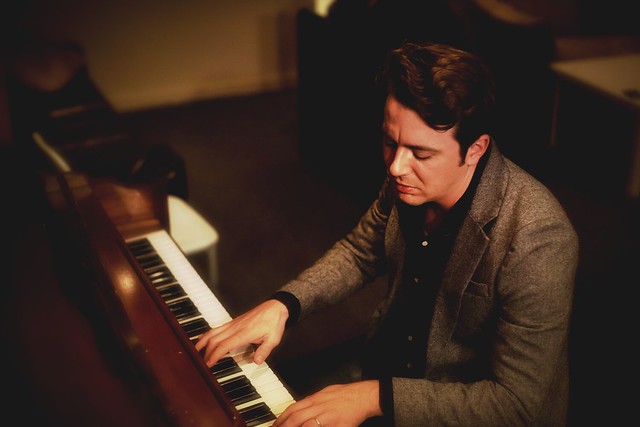 Midway through his set, Joe Pug stepped out from behind the mic and perform a cover of Tex Thomas’s “Deep Dark Wells.” When he finished, he commented, “there does not need to be any intermediary” between the performer and the audience.

When the pandemic put a halt to touring, the singer-songwriter pivoted to performing online once a week on Sunday evenings. While it’s helped him get through the past couple years, the virtual experience leaves something to be desired on both ends.

Friday evening’s performance at The Hamilton Live was a reminder of the power of live performance, of the magic that can happen between a musician and a live crowd. The show opened with a set by rising singer-songwriter Michaela Anne, who’s most recent album, Desert Dove, made Allmusic Best Folk and Americana albums of 2019. “I thought I’d start off light, with an apocalyptic, end-of-the-world love song,” she said after concluding her opening number. She wrote it had  during a recent road trip with her husband and baby daughter on which they drove through a hurricane in Arkansas, a forest fire in Colorado, and a blizzard in Wyoming.

For Michaela, her appearance at The Hamilton was something of a homecoming. She was a military kid; her father was in the Navy, and her family lived in the DMV when he was stationed at the Pentagon. Her family has a long and proud military tradition: she recalled how once, while on tour, she stayed with her uncle, who was the commandant of the marine corps. The experience of moving around a lot inspired “Child of the Wind.” Her parents’ relationship — they met at 16 and he was often away at sea — is behind “Is That What Mama Meant?”

For most of his set, Joe was accompanied by a bassist. He was supposed, he mentioned, to have a piano player with him as well, “but that didn’t work well.” Joe was more than up to the task of tickling the Ivories, before which he joked that he was going to the play collected works of Billy Joel. He started off solo, however, with “Hymn #35,” “Nation of Heat,” and “The Letdown.”

Watch Joe Pug perform “The Letdown” live at Americanafest in 2019 via YouTube:

Some of Joe’s music can be a bit dour, a fact that he is very aware of. Before playing “After Curfew,” he joked, “The people who’ve been here before have already ordered stiffer drinks.” The serious mood continued for the next two songs, which were covers. He played “Sam Stone,” the harrowing of tale of a Vietnam veteran who succumbs to heroin addiction, by the late John Prine, who has been an influence on Joe’s songwriting, among many others.

The second cover was the late Justin Townes Earle’s “Mama Eyes,” which deals with his conflicted relationship with her father, fellow musician Steve Earle. Joe and Justin were of similar age, and they often toured together prior to Justin’s death in August 2020; Joe told the audience he would always make a point of coming out to hear this one.

A native of Prince George’s County, Maryland, Joe returned there several years ago when he started a family. As he mentioned after “The Flood In Color,” he has three children, all under five years of age. Getting away for a few hours, as any parent can probably relate, he said, is likely what heroin feels like (although the long-term effects are almost certainly less harmful).

Other songs included “Bright Beginnings,” “How Good You Are,” “Veteran Fighter,” “If Still It Can’t Be Found,” “Hymn #101,” and “Speak Plainly, Diana.” “I Don’t Work In A Bank,” he explained, was written for his wife. They were having what he described as “a bitter disagreement” and “couldn’t reconcile because I was absolutely right.” He was having trouble finding the words to convey his argument to his wife, so he put them in a song.

After the planned portion of the set, Joe opened the floor to requests, playing “O’ My Chesapeake” and “Deep End,” then finishing with “My Father’s Drugs.”

While Joe’s presence has certainly been welcome online, Friday evening was the kind of experience you just can’t have virtually.