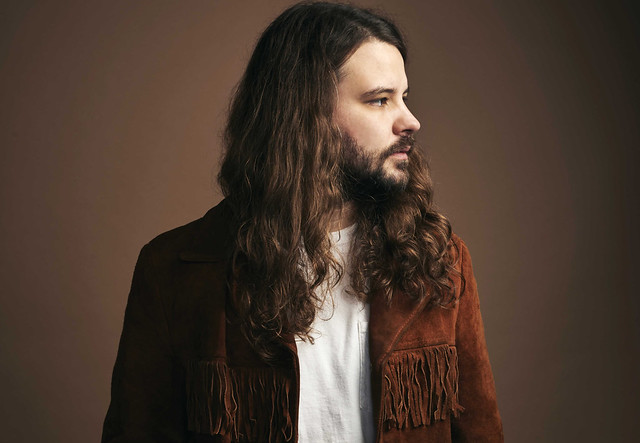 The director John Waters once said, “be a stealth bomber for the counterculture.” That quote came to mind as I watched Brent Cobb at City Winery in DC recently. With his smooth, relaxed, easygoing demeanor and delivery, it’s easy to forget just how much range he has, and how much of a rebellious spirit is just underneath the calm exterior. As a performer, Brent is equally capable of sustaining an audience’s attention sitting on a stool, playing a solo acoustic set, fielding requests, as he is with a full band, going into territory that borders on Led Zeppelinesque heavy metal. And even when he’s delivering a mellow song, if you listen closely to the words, you realize that Brent is most definitely stirring the pot.

A native of southern Georgia, Brent comes from a family of musicians and artists, and he started writing songs in his teens. When he made his Grand Ole Opry debut in 2017. he played a song his father wrote while they were visiting his mother’s native Cleveland in 1992, “Country Bound.” It’s easy to forget that, even outside the ranks of (especially full-time) professional artists, there are tons of incredibly talented creative doing amazing work. (As opener Gabe Lee quipped, being a songwriter means having “like four other jobs.” As a prose writer, even selling movie rights only gets you out of the daily temporarily. Capitalism, man.)

“I’m really just a songwriter,” this long-haired country boy declared. He’s made his bones on Nashville’s Music Row, writing songs like “Solving Problems.” Brent approaches his craft through influences like Kris Kristofferson’s “To Beat The Devil” and Townes Van Zandt’s “Rake,” the latter of which he did a full-band cover of, and I cannot emphasize enough just how hard this went. I truly this intend this as a compliment: This song is going to haunt my nightmares. When I eat an edible before a show, I am looking to go for a ride, and Brent and the boys put their feet on the gas and hauled that mother.

Early in his career, the late “Rowdy” Jason Cope of the Steel Woods, who passed away a few years ago, served as a mentor. His passing spurred Brent to finish “When Country Came Back to Town,” which he said he’d been working on for 15 years. The song is about the scene and the artists, mostly unheard on the radio, broadly considered “Americana” and “alt-country,” who he considers to have brought about a restoration in Nashville. I have to admit: Brent pulled a pro move at the beginning of this song, and he swerved. He lists the names of several male artists, and I started thinking, “Oh, god, please don’t let this be all don’t all dudes, please don’t let this get weird and uncomfortable.” As soon as I had that though, Brent started naming a series of women. As a myself, I’m reasonably confident this is intentional.

Another thing to note about this song: If you list a lot of names, the names you don’t say become at least as, if not more important. than the names you do say. After the show, I sent Brent a brief tweet, to the effect that people might just wonder about who isn’t on the list. He replied, “That’s what I’m hoping.” As they say, shots fired.

Watch Brent Cobb perform “When Country Came Back to Town” live in Nashville on YouTube:

At City Winery on Feb. 10, the show opened with a series of country gospel numbers from Brent’s latest release, And Now Let’s Turn To Page… While driving with his four-year old child, Brent was t-boned at a “four-way country stop,” and he broke his collarbone. His son, I am pleased to relate, was not injured. The accident led him to reflect on mortality, and to revisit many of the songs he grew up with in the church, like “Just A Closer Walk With Thee,” “In The Garden,” “Are You Washed In The Blood?”, “Softly and Tenderly,” “We Shall Rise,” and “Old Country Church.” Many of these lovely songs came with wonderfully detailed stories about family history. Brent is a hell of a storyteller, and I can’t do them justice; the delivery of a good story is as important as the content. If this weren’t an absolute fact, we’d read summaries instead of novels and stories. And this is even more true with a live performer: You need to go see Brent and experience him telling you these stories.

Now, I might seem like an unlikely appreciator of gospel music: I’m a northern bred and raised, secular Jew. But I can absolutely appreciate gospel music, when it’s done well, with taste, passion, skill, and conviction. Just because it’s not my faith doesn’t mean I can’t appreciate it as art, and it doesn’t I can’t appreciate the beauty in someone else’s expression of faith. On the other hand, I would rather fight a DI cornerback than be forced to listen to Christmas music. I do not say this idly: At college, I, a man who stands 5′-4″, started a physical altercation with a member of the Wolverines who went on to have a lengthy NFL career. He struck me once with his open hand, and it was over. I would rather go through this again than listen to Christmas music.

After the gospel material, Brent segued into his solo mini-set. I’ve already mentioned “Solving Problems,” “Country Bound,” and “When Country Came Back To Town;” he also played the first song he wrote in Nashville, “Lorene.” As he remained seated throughout that part of the show, he fired off a few references to Don Williams, and he joked, “People love self-deprecating songwriters.”

With his band backing him once more, he dove into “Shut Up and Sing,” which tackles the issue of whether singers and songwriters should be speaking out on issues.  The last few things turned toward southern rock: “Ain’t A Road Too Long,” “If I Don’t See Ya,” “30-06,” and “A Bar, A Guitar, and A Honky Crowd,” which he wrote when he was 16.

Perhaps Brent said it best himself: “It’s a diverse show. I’m a diverse artist.” This show ran the whole gamut in terms of tones, styles, and genres, and all of it was done very, very well: The songs and the performances were uniformly strong. I cannot recommend strongly enough that you catch Brent Cobb.