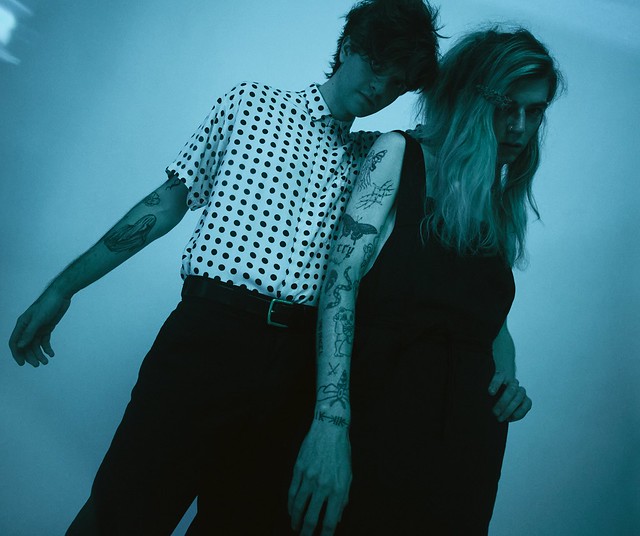 Philadelphia dark-wave duo Korine launch a headlining tour that brings them to DC to perform at Comet Ping Pong on Thursday, March 3!

Following a self-released EP Corsage” in 2017, Korine debuted their first full-length record New Arrangements in 2018 on Philadelphia label Born Losers Records which helped land the band multiple nationwide tours. Following this release were two acclaimed singles “Uncrossed” and “To You,” which were specially released on a limited 7” vinyl in the Fall of 2019, and marked a stylistic evolution for the band — a departure from the familiar ’80s era influence to incorporate a more contemporary pop awareness.

In 2020, Korine released “The Night We Raise,” showcasing the band’s growth with the songwriting and musicality more assured than ever.

Watch the official music video for “Cruel” by Korine on YouTube:

Joining Korine for this show are DC’s own Aertex with members Carson Cox (Merchandise, Death Index), Chris Moore (Repulsion, Coke Bust), and Josephine Olivia (Blacksage, Vosh) — who combine elements of goth, post-punk, and darkwave together in their debut two-song demo “Superstition”. In the short period of time being a band, they have already played shows with The Psychedelic Furs, Boy Harsher, She Past Away, Gost, SRSQ, Unmaker, and many others. Rounding out the bill is Philadelphia’s synthpop act Catherine Moan, also a project signed to Born Losers Records.