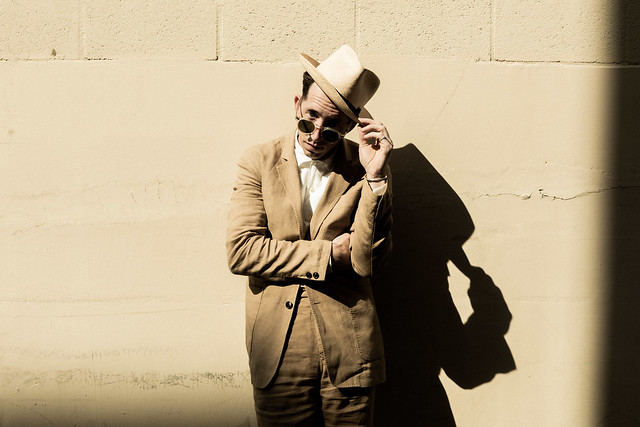 Having a hook for story is important. Sometimes, the hook is so good, it’s worth stretching things to make it work. The truth is, Bloomington, Illinois, where singer/songwriter Pokey LaFarge was born, and neighboring Normal, where he grew are nowhere near the Mississippi River. They’re right in the middle of central Illinois. But the hook involving the Mississippi is just too good to pass up, because so much of what he does combines the many distinctive sounds of the Big River, jazz and blues, with an Americana brand of country and retro rock.

For the first time in eight years, and his first return to the DC area following the tour hiatus imposed by the pandemic, Pokey performed The Birchmere recently.

When Pokey took the stage at The Birchmere on March 30, he announced, “There will be no magic,” but he did promise, “there will be dad jokes.” He later delivered on this promise, with a joke selected just four local audience: “The Pentagon was going to be called the Hexagon, but, due to budgetary constraints, they had to cut corners.”

In developments since his last visit to the venue, he noted, “I play electric guitar now.” He played his set as as part of a trio with backing on drums and bass, a relatively stripped down approach compared to his albums, which tend to use more instrumentation, often involving horns. He played a small a section of the set solo acoustic, including a new song, “Lucky Sometimes,” and “One at a Time.”

Since he last toured, Pokey has released two albums: 2020’s Rock Bottom Rhapsody and 2021’s In The Blossom of Their Shade. He drew largely from those records, playing “Ain’t Coming Home,” “End of My Rope,” and the aforementioned “Lucky Sometimes” from the former,” and drawing even more heavily on the latter, opening the set with “Get It ‘Fore It’s Gone,” and playing “Mi Ideal,” “Rotterdam,” “Drink of You,” “To Love or Be Alone,” and “Killing Time.”

Pokey is a unique character and that shows, in his sound, in his lyrics, and in his banter. He introduced “Killing Time” as song that was meant to be “as if Roger Miller wrote a song for Frank Sinatra’s country album that he never recorded.”

In addition to material from his new albums, the lengthy set had plenty of old favorites, too: “Wanna Be Your Man,” “When Did You Leave Heaven,” “Barcelona,” “Fine to Me,” “Something In The Water,” which closed the main set, and “Goodnight, Goodbye,” which performed as an encore.

Pokey’s stuff is totally unique; no one else does anything quite like what he’s doing. His sound is entirely his own, and his lyrics have have real voice and literary depth. He’s not trying to make mainstream hits; he’s making real music, inspired by real thoughts and real feelings, songs about real people. He’s not afraid to be distinctive, to pick out a niche, and to mine that territory and really explore it, to find its corners and crevices, seek out all the hidden depths. That’s a journey that not everyone is necessarily going to want to take with him, and that’s okay, because not everything is meant for everyone, nor should it be. I’ve always thought that the best stuff can’t appeal to everyone because it’s not afraid to be particular and make the hard choices. Pokey LaFarge’s music is that kind of best stuff: it has a real character and identity, it knows what it is.