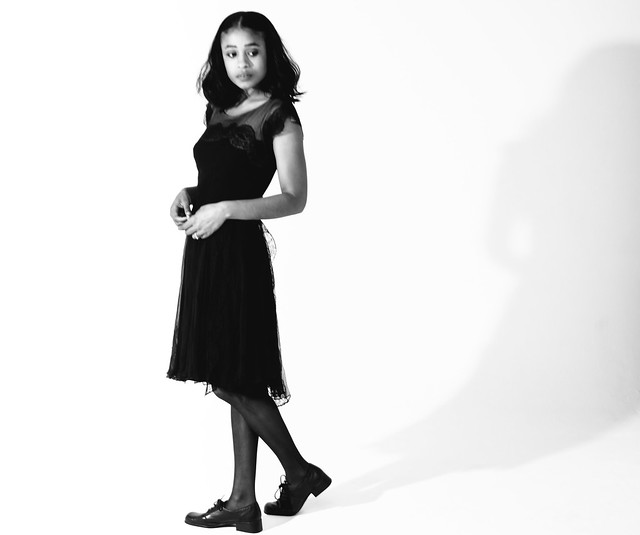 “When I fell in love with the blues,” Adia Victoria told the audience at The Miracle Theatre during her recent performance there, “I was a 22-year-old high school dropout, living in Atlanta, working as a telemarketer.” The blues has been a source of salvation for her, as she has lived through tough times and worked hard jobs.

In 2020, as the Covid pandemic was breaking, she found herself working in an Amazon warehouse in Nashville; she was, as she noted, “an essential worker,” packing up people’s groceries. She was haunted by thought her very breath could carry a disease that might kill someone; it’s a heavy thought, and one I had at times as well. While on a break, she composed the song, “Ain’t Dead Yet.” At The Miracle Theatre on April 21, she dedicated the song “to everyone in this room who is still drawing breath.”

There’s an old saying about the blues, that you sing the blues because you have a sadness inside you, but, once you’ve sung them you don’t have that sadness anymore. Adia Victoria embraces the darkness of the blues, not just in sound, but with her all-black attire, which she herself describes as goth. “Ain’t Dead Yet” appears on the her aptly titled most recent album, last year’s A Southern Gothic. It’s her best work yet, a perfect distillation of her affection for her native South, for its literary traditions, and for its spookier, eerier elements.

The set opened with the first track from that album, “Far From Dixie,” which she explained is “about a girl from South Carolina [her home state] who runs away from home too far, too fast.” Many of the tracks on the album deal with natural settings and the wilds of the south. “Magnolia Blues” was inspired by a tree in the yard where she grew up, and reflecting “about what magnolia meant. That magnolia was a place where I could dream. She wrote “My Oh My” from the perspective of her sisters, about when she would go disappearing into the kudzu.

Watch Adia Victoria perform “My Oh My” and “Magnolia Blues” live on Lightning 100 via YouTube:

In many classic blues songs, you’ll hear the singer bemoaning his mistreatment by a mean-hearted woman. These women’s stories, Adia emphasized, get buried, and are never told. “Mean-Hearted Women” gives a voice to those too-often silenced characters.

For all the darkness in her persona, Adia is actually a very hopeful, spiritual person. “Troubled Mind,” another new track, is “a prayer I prayed when I was falling asleep on my big brother’s floor.” She’s also a very pleasant person. I understand she chewed out some rude audience members at another show and, frankly, if you’re being loud enough to disrupt the show, you deserve to be told to shut up. I met her briefly after the evening’s performance, and she could not have been nicer. Being nice isn’t the same as putting up with inappropriate behavior.

One cover, of Blind Willie McTell’s “You Was Born To Die,” appears on A South Gothic. To perform it, Adia was joined by the opening artist, Lizzie No, for an excellent duet.

While her first album, Beyond the Bloodhounds, received strong reviews, Adia had shied away from performing that material. “A lot of those were written in my 20s about my 20s, when I was lost,” she said. She has gotten more comfortable with those songs, and many of them have made their made their way back into her set, like “Sea of Sand.” “Head Rot,” she explained, is “about getting your heart split in two.” “Dead Eyes” is “about a girl that don’t believe in God, but she does believe in whiskey.”

There were also a few songs from Adia’s second album, 2019’s Silences: “Different Kind of Love” and “Whole World Blues.” The latter is about “a preacher’s daughter who can’t fit in her small, conservative southern town.” When she introduced the song, she asked if anyone didn’t fit in growing up; I was definitely raising my hand.

The set concluded with “South Gotta Change,” which was released as a single in 2020. Adia talked about the passing of the great John Lewis, the idea of getting in “good trouble,” and speaking truth to power. She dedicate the song to T Bone Burnett, who produced her most recent album.

When she returned for her encore, she said, “I’ve never played a movie theater before. Well, I have, but they escorted me out.” She finished her performance with “Heathen,” which is about “having fun with my body with men and not feeling any shame about it.”

Singer-songwriter Lizzie No opened the evening with a strong, entertaining performance that had great songs and more than a little humor. She plays both the harp and guitar, the former of which not being something you see very often, so it was a welcome change of pace. After beginning with “Deep Well Song,” she declared, “I am trying to be more honest with audiences that I am one of the great American songwriters,” telling the audience, “I’m the next Bob Dylan.” She exhorted us to “pay attention to the poetic devices.”

A song about having a panic attack on New Year’s Eve at a folk club between sets was next, introduced by a story about being approached by a man with a with a metallic grill on his teeth. It sounded like the sort of thing that would be very disturbing during a panic attack, especially if, as I understood her story, he was also glowing.

“Outlaws” was written after she binged Sons of Anarchy following a breakup. Maybe I should watch that? Is it a good show? I didn’t get the title of the next one, but Lizzie did say it’s for her new, upcoming album. She finished up with “Phantom Limb,” which she described as “another breakup song.”

Lizzie was really great, and she’ll be performing on the Millennium Stage at the Kennedy Center on Saturday, April 30. The best part — the performance is totally free, so you should absolutely check it out if you want to hear some great music.

Reserve your free tickets for Lizzie No at The Kennedy Center’s Millennium Stage!