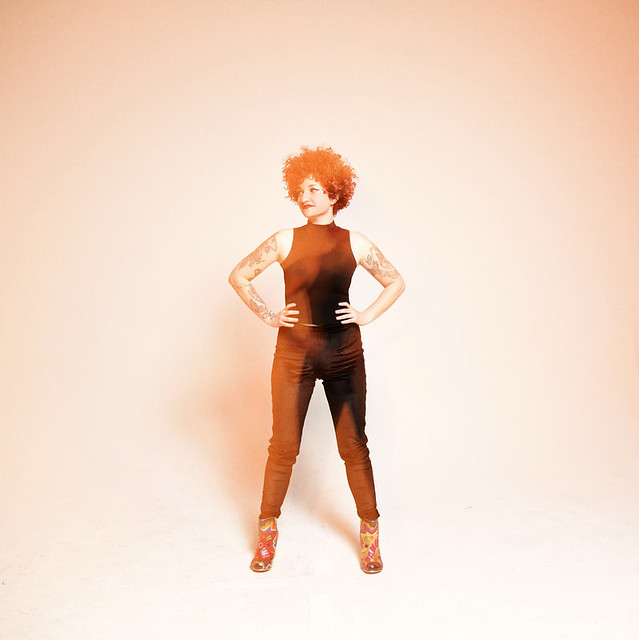 Carsie Blanton grew up in the Shenandoah Valley, and she came to The Birchmere many times as a teenager. Since becoming a professional musician, she’s played the venue several times in an opening slot, beginning with a performance with the late Leon Redbone. Carise recently headlined the historic Northern Virginia venue for the first time.

In addition to being her first headlining spot at The Birchmere on May 11, the date also served as the CD release for her new album, Body of Work. Last December, she and a few of her bandmates went to El Paso for a few days, and they ended up recording an album, mostly of what she called “reinterpretations” of existing, older songs.

At The Birchmere, Carsie opened her set with the second track on the album, the protest anthem “Down In the Streets.” She shared many other tracks in her set, including the steamy “Hot Night. “Harbor,” which she told the audience is about “wanting to be safe and being scared of the world around you.”

Introducing “Lovin’ Is Easy,” she said, “I fall in love a lot,” and the song is about “being a person with a very permeable heart.” It’s a very personal song, as is “When Someone Is Gone,” which she wrote for her grandmother, Gloria, who lived in Arlington most of her life, and who often came to see her at this very venue. Sadly, Gloria passed in the pandemic.

Carsie also recently faced the loss of her 16-year-old dog, LMNOP, who inspired “The Animal I Am.” LMNOP, I was glad to hear, was healthy and strong up to the end, and was quite the hellraiser.

There’s an eclectic mix of influences in Carsie’s style. “In The Middle of It,” another song that appears on the new album, was inspired by seeing country star Suzzy Boggus at a folk festival, and emulating her writing.

Whether the song is personal or political, Carsie isn’t afraid to be direct, and she doesn’t pull any punches. A few months ago, she played a Mountain Stage taping at the Kennedy Center, and West Virginia Senator Joe Manchin was in attendance. This inspired her to play to “Deal With the Devil.” “Shit List” is equally political, a song about, as she puts it, “punching Nazis,” which was inspired by the protests and counter-protests, several years ago now, in Charlottesville. She admitted to being a little puzzled by the chants of “Jews will not replace us” there, because, as she reflected, she and her mother seemed like the only Jews in the area. “Rich People,” one of her funnier songs, is a complete sendup of the weirdness surrounding money and inequality.

For a long time, she lived in New Orleans, which she loved dearly, and which she described as a great city, and a very musical city, but also a strange place. “Smoke Alarm” was written about the city while she lived there. Reflecting on “Party At The End Of The World,” she said, “It seems like the world is ending a lot lately.” While she didn’t know John Prine personally, his songs influenced her, and she wrote a song to honor him shortly after his passing a couple years ago. “American Kid” contains a lot of vignettes of growing up in the Shenandoah Valley. After playing “Be Good,” she admitted, “It’s harder than it sounds,” and, “Some days, maybe we burn it down instead.”

Carsie finished the set with the popular “Buck Up,” and, after receiving a standing ovation, returned with her band for an encore, playing, “All My Love” to send the crowd home.

Watch Carsie Blanton perform “Buck Up” live for a Daytrotter Session in 2019 on YouTube:

Before Carsie took the stage, the crowd was treated to a fantastic opening set by New Orleans-based keyboardist and singer-songwriter Lilli Lewis. Lilli’s been making music for a while, more than two decades but had put her own work on the back burner to focus on running a record label focus on the musical heritage of New Orleans. I was not surprised to find, when I read Lilli’s bio, that she trained as an opera singer, as she has an amazing voice, absolutely beautiful and incredibly powerful.

Lilli shared with the audience that, in working on the label, she began to fill a “heart sickness,” and she needed to get back to making her own music. The release was last year’s LP Americana, which was strongly received in the roots music community. These four shows with Carsie are her first live performances in some time.

Lilli opened with the spiritually influenced “Coretta’s Song,” then got into the material from the latest album. Her set included the tracks “Wrecking Ball,” “Copper John,” and “My American Heart.” Before playing my “American Heart,” which closed her set, she told the audience, “if we can’t acknowledge each the humanity in people we don’t agree with, we’re in trouble.” Her set also included a number she described as “a simple song” and “Sweet Baby Slumber.” Though the audience may not have been familiar with her work, they ate it up right up, giving her a warm reception and a standing ovation.