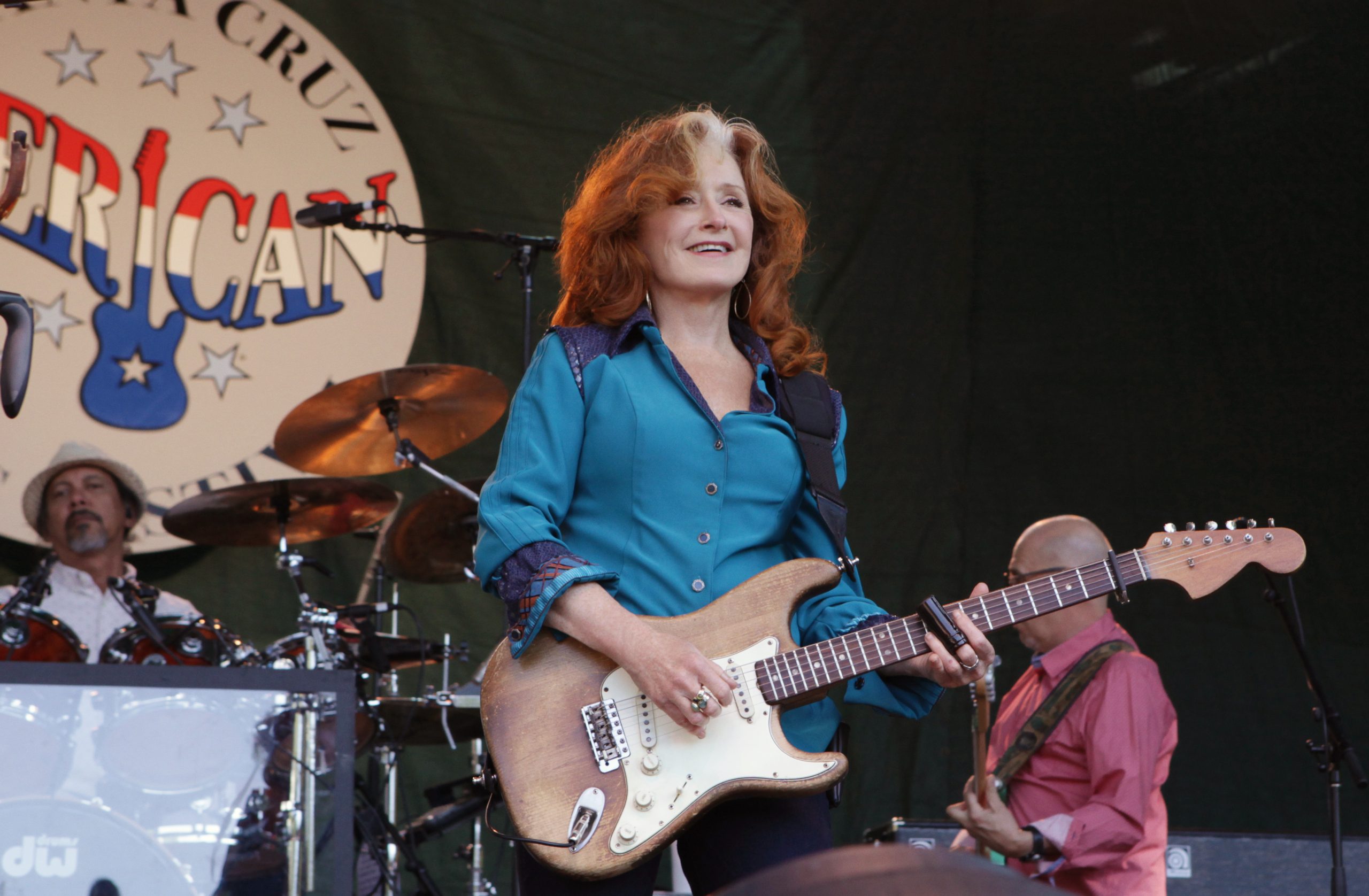 I don’t normally begin a show review by talking about an opener rather than the headliner, but I’m going to break from precedent and start this blog by talking about Lucinda Williams’s opening set for Bonnie Raitt at Wolf Trap on Friday.

In the evening’s most emotional moment — and it was an evening full of emotional moments — the crowd rose and gave her a standing ovation when she explained she wasn’t playing guitar because she had survived a stroke late last year. Her band included an additional guitarist to cover those parts, and she had some assistance with with taking and leaving the stage, but she stood, strong and proud, for the entirety of her roughly hour-long set.

Lucinda’s set came off especially well because she sounded great at Wolf Trap on June 10. Her voice sounded better than it has in some time. I don’t know what she’s done to get her instrument in better shape, but it sounded great. I was honestly a little nervous about seeing her after her recent health problems. I was worried her performance might be a letdown and leave me depressed, but the experience couldn’t have been further from that. She absolutely killed it.

With her most recent album, Good Souls Better Angels, now more than two years old, Williams opted to play mostly favorites from her extensive catalog. Lucinda and her played only a few cuts from the album. “Big Black Train,” she explained, is about depression. This is a train “you don’t want to get on board.” She also brought Bruce Springsteen’s discussion of his struggles with depression in his memoir, born to run. Williams began her career as an acoustic blues player, and “You Can’t Rule Me” is an old number she learned from an old-time blueswoman, Memphis Minnie.  (She wore a t-shirt with the song’s title on the front.)

The landmark 1998 album Car Wheels on a Gravel Road, which was recently voted in the top 100 of Rolling Stone‘s list of the 500 greatest album, got the most attention. Williams and her band played the album’s only cover, “Can’t Let Go,” composed by Randy Weeks, which was recently covered by Robert Plant and Alison Krauss on Raise the Roof. “Drunken Angel” tells the story of the tragic shooting death of Austin musician Blaze Foley. “Lake Charles,” she explained is “about someone from Nagadoches, Texas, who had an affinity for Louisiana.” She described as “smart” and the “life of the party,” and she praised his skill at making gumbo. Unfortunately, she said, he also very much liked to drink. She also played “Joy.”

She started the set with “Steal Your Love,” a cut from 2001’s Essence. Other songs included “People Talking” and “Honeybee,” and she finished with “Get Right with God.” She stayed a moment to speak about the hearings about the events of January 6, 2021, and praised the strength of Washington, DC’s residents before leaving to a rousing cheer.  If you had any doubts about whether Lucinda was back at full strength, I can tell you: this is best I’ve ever seen her. If you’re think about catching her live, don’t hesitate to do it.

Bonnie Raitt’s headline performance was every bit as impressive. As much as I enjoy her albums, Raitt comes off even better as a live performer. She has a commanding presence, an undeniable star quality. When she’s on the stage, you can’t take your eyes off of her. She just put out a new album, And Just Like That…She opened with one of those tracks, “Made Up Mind,” which was written by the Canadian roots-rock duo The Landreth Bros. (A hot tip: if you’re looking for something to do on Wednesday, June 15 they’re playing City Winery.)

Watch the official music video for “Made Up Mind” by Bonnie Raitt on YouTube:

Later, Raitt and her band played the title track. She explained that she wanted to write something in third-person perspective in memory of John Prine, who passed away from Covid early in the pandemic. Several years ago, she read a news story about how the mother of a heart donor met the individual who received the organ, and how the recipient invited her to put her head on his chest and listen to it beat.

Speaking of John Prine, when she got to “Angel From Montgomery,” she told the audience, “I didn’t know if I’d be able to sing this song on this tour.” She wrote the lyrics to “Livin’ for the Ones,” which simultaneously eulogizes those we’ve lost the last few years and celebrates the joy of continuing life, to music composed by her longtime guitarist, George Marinelli. “When We Say Goodnight” was written by Jonah Smith.

Covers have always formed a large part of Raitt’s repertoire, and Friday night was no exception. She played John Hiatt’s “No Business” and Talking Heads’ “Burning Down the House.” “Something to Talk About” and “Have a Heart,” which are often thought of as “her” songs, were written by others. Introducing “Something to Talk About,” she said, “This song always rejuvenates me.” Bonnie mentioned how she once made the mistake of playing four ballads in a row and the importance of sequencing a performance correctly.

While Raitt is a terrific interpreter of songs, she also writes plenty of great songs, and several of those were in the set, too. For “Nick of Time” she switched from guitar to keys. Her most unique instrument of the night was a recycled aluminum guitar she played on “Back Around.” She originally recorded that with a Malian band, after spending time traveling in that country and immersing herself in its culture. She’s a serious student of the blues, and she went there to explore the West African roots of the music. “Blame It on Me,” “Need You Tonight,” and “I Can’t Make You Love Me,” which she played for her encore, are all great songs. The encore closed with “One Belief Away.”

This was a great start, for me, to what promises to be a really exciting, fun season at Wolf Trap. You really couldn’t ask for a better pairing of two artists, and both were in fantastic form. On top of that, it was a beautiful, mild, late spring night, and it was absolutely perfect for an outdoor evening concert. Evenings like this are a treasure. As I’ve mentioned, Williams was in terrific form, and she’ll be in Annapolis, at the Maryland Hall for the Creative Arts, on Friday, Sept. 16, in what promises to be a great show.