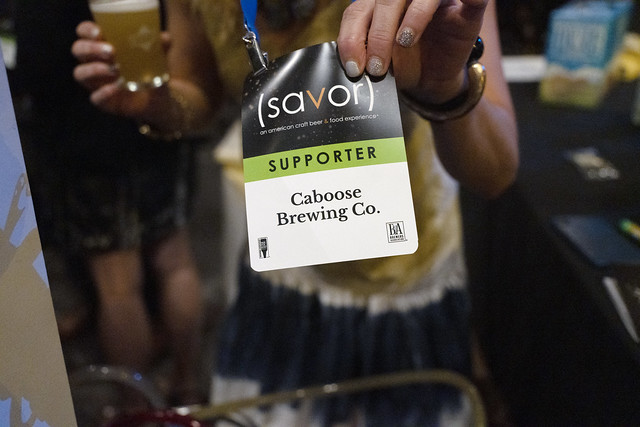 Although still in Washington, DC, SAVOR: An American Craft Beer & Food Experience, produced by the Brewers Association, shifted away from its longtime location at the National Building Museum and hopped instead to The Anthem. It also set its date back about a month from when it would traditionally occur pre-pandemic. The result was a summertime soiree that drew roughly 2,300 people ready to party with favorite beer styles.

Well, it was a fine time indeed, bursting with beers both familiar and mysterious, and packed with friendly brewmasters. I personally was pleased by the presence of Monday Night Brewing, headquartered in Atlanta, Georgia, long a favorite brewery of mine. The cozy production brewery is nestled on comfortable industrial park grounds in the West Midtown neighborhood of Georgia, and it is surely a place that puts you at ease upon arrival. Since I first discovered it some years ago, Monday Night Brewing has expanded to Birmingham, Alabama, and Nashville, Tennessee. 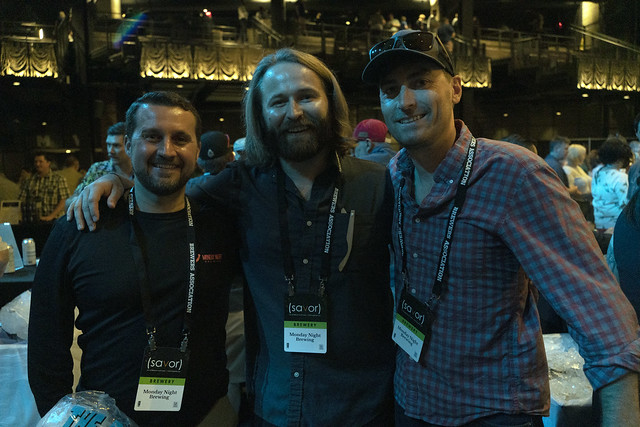 Monday Night Brewing Company at The Anthem for SAVOR!

Two of the things I love about Monday Night Brewing are its extraordinary competence and its slightly quirky, irreverent nature. So it was no surprise that Production Manager Aaron Butzen, Brewer Peter Kiley, and Nick Kiley were there to serve up some delicious beers. Monday Night poured their Faithful Instruction Belgian-style fruit lambic (6% ABV), paired with duck confit on a scallion pancake, and Midnight Delight wood- and barrel-aged beer (11.5% ABV), paired with sticky toffee pudding. The Brothers Kiley are deligtful and witty representatives of their brewery, and Nick said their Faithful Instruction tasted of Atlanta, a hot city with a large transient population. 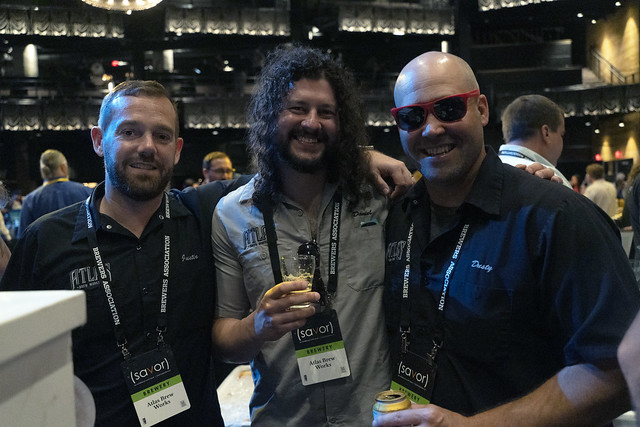 The team from DC-based Atlas Brew Works poured some of the best beers from anywhere.

One of the reasons that I love attending SAVOR, however, is to gain some facetime with our hometown heroes among the craft breweries, and I was pleased to find on hand DC’s own Atlas Brew Works, represented by Founder and CEO Justin Cox, Sales Director Dusty Poore, and Head Brewer Daniel V. Atlas served their Half Street Hefeweizen south German-style hefeweizen (5.3% ABV), paired with potato and onion frico, and their 202 brett beer (5.5% ABV), matched with spring lamb cassoulet and roasted long hots. 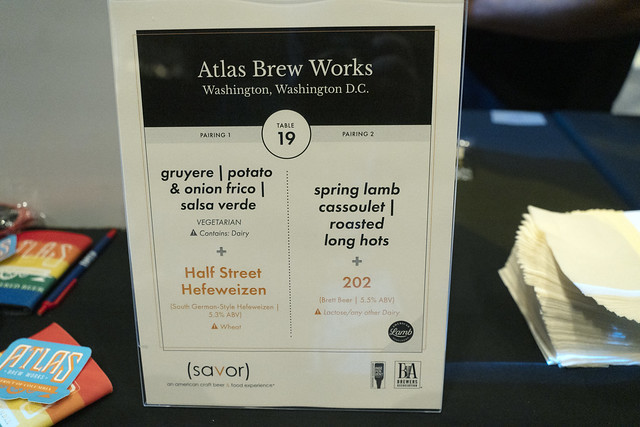 Atlas has temporarily closed their Ivy City brewery but promises to reopen the inviting space in the not-too-distance future. Meanwhile, they continue to welcome visitors to their Navy Yard location on Half Street, which lends its name to that delicious hefeweizen. 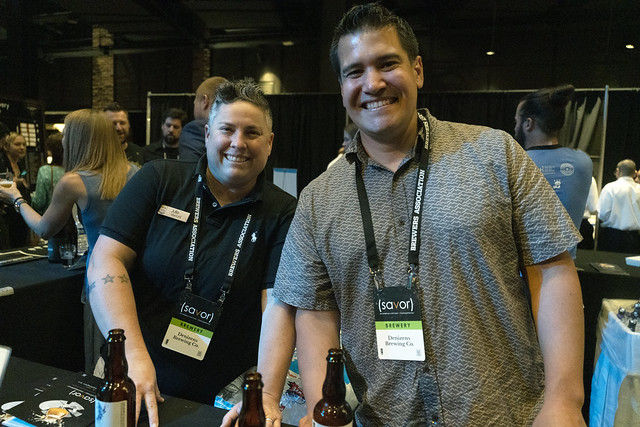 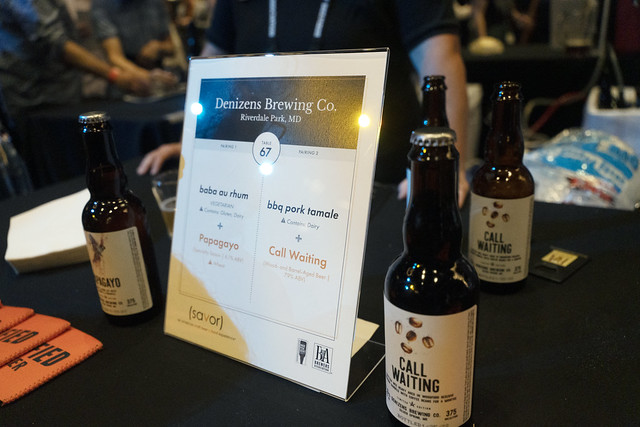 Denizens Brewery represented the DMV well at The Anthem. 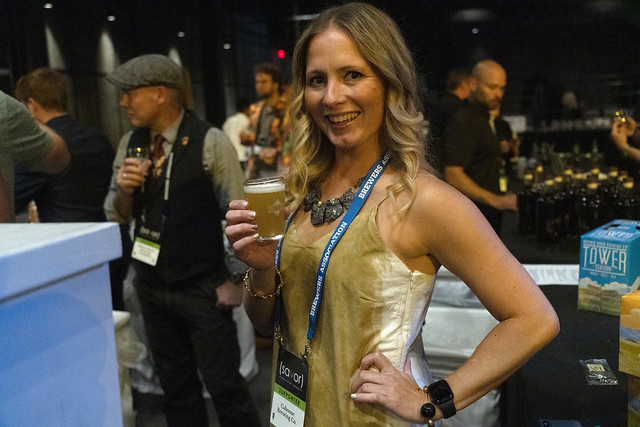 While many breweries were carrying sours, Caboose Brewing offered one of the most pleasant.

Equally pleasant was the always enjoyable Caboose Brewing Co., headquartered in Vienna, Virginia. Brewer Jodi Hunter aka the brewery’s “Queen of Sours” was among those pouring Caboose’s Baby Hazy hazy pale ale (4.5% ABV), paired with grilled lamb and ratatouille, and their Tangerine Gose American-style fruited sour ale (4.5% ABV), paired with spicty green curry and grilled shrimp. They may also have had their To Helles and Back traditional German-style bock (6.8% ABV) if you were quick enough. 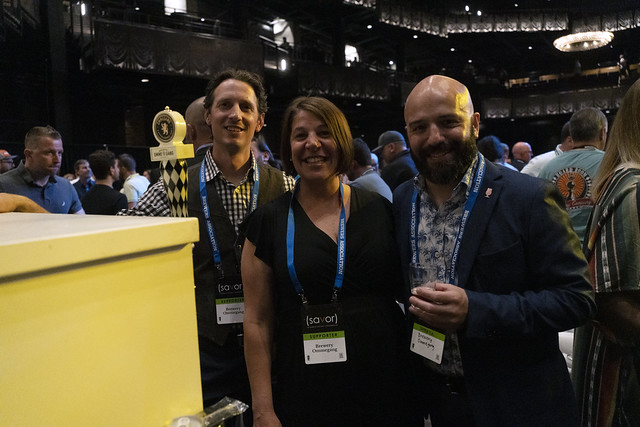 One of the most popular breweries from anywhere was of course Brewery Ommegang, based in Cooperstown, New York. On hand were DC rep Stephen Tuzeneu, Brand Director Melissa Miosek, and Joe Green. Brewery Ommegang offered its 25th Anniversary Ale, a Belgian-style speciale belge (9% ABV), paired with smoked brisket), and Idyll Days Pilsner Belgian-style session ale (5% ABV), paired with sweet potato samosa. Ommegang also surprised with the addition of its Dream Patch fruited kettle sour (6.5%), a last-minute addition to the program that the brewery quickly ran out of due to its limited quantity on hand. 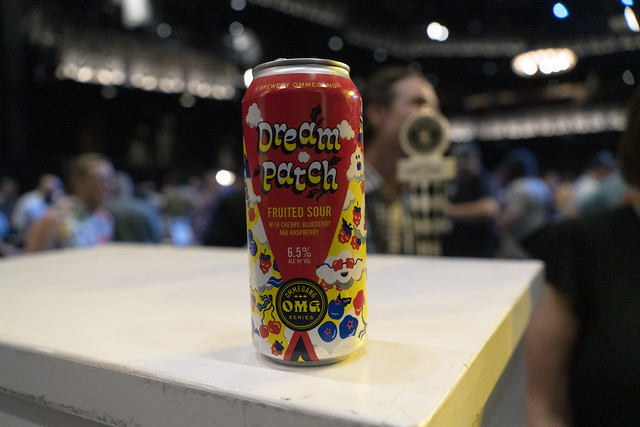 The coveted sour beer in question.

Upon departure, attendees collected the 2022 Commemorative Beer: Crafted by Two Roads Brewing, a table beer brewed from Connecticut-grown malt and hop injected with a “secret” strain of yeast by the Statford-based facility.

Look at that crowd! 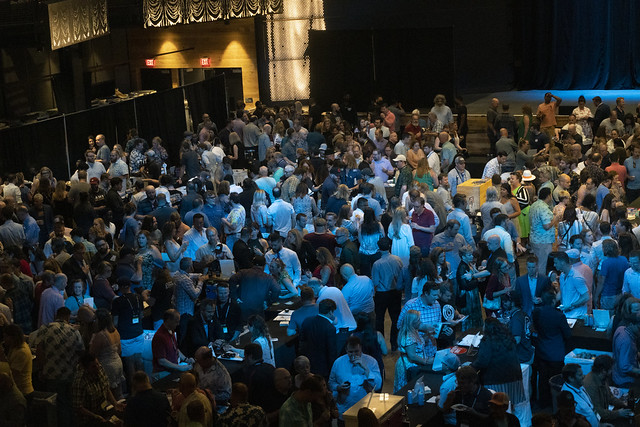 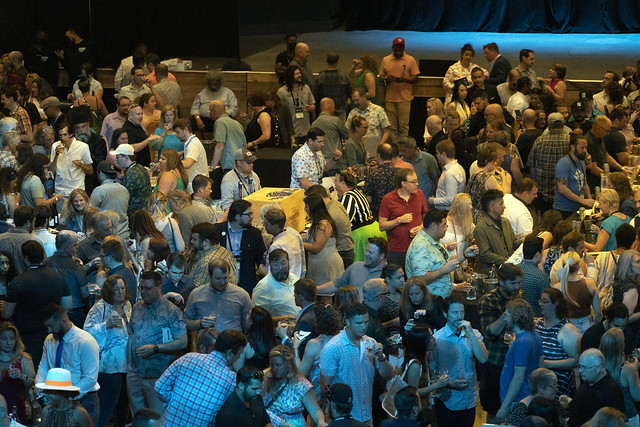 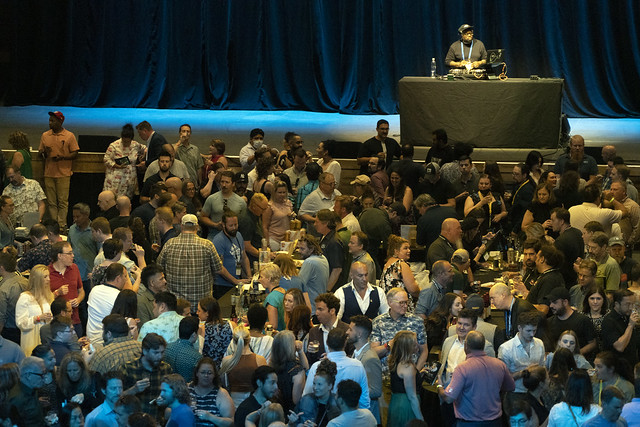 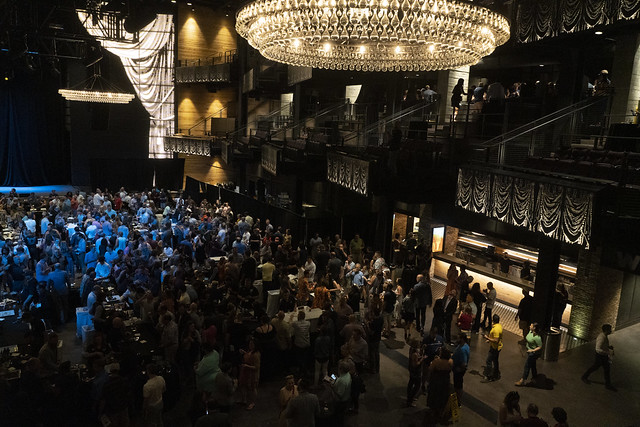 SAVOR will return to DC in 2023. We should hope for its return as well to The Anthem, where the event spread its wings to become a real party.

For updates about the SAVOR event, visit the website of the Brewers Association!