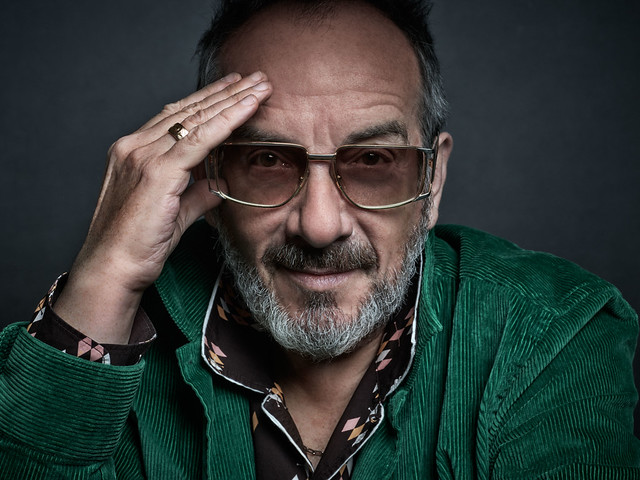 At the end of his recent set with The Imposters at Wolf Trap, Rock & Roll Hall of Fame inductee Elvis Costello was joined by the man he called his hero, Nick Lowe, for the last two songs. Elvis wrote “Indoor Fireworks,” but Lowe was responsible for the show’s last number, “(What’s So Funny ‘Bout) Peace, Love and Understanding).”

He wrote it during his tenure with Brinsley Schwarz in the early ’70s. The band has held up well to critical scrutiny over the last five decades, but, like many of their peers in the British pub rock movement, they had limited commercial success. Costello became hip to Lowe’s work, though, and, in his memoir, Unfaithful Music, he writes about seeking out Lowe to get advice from him. Their relationship became closer when Lowe went to work as the house producer for Stiff Records, the label responsible for the British punk movement. There he worked on records by The Damned, Graham Parker, Wreckless Eric, and, of course Costello — his first five albums. On his third album, Costello dusted off “What’s So Funny,” making it the closing track of the album.

If you’re writing about this song, you have to bring up The Bodyguard. Curtis Stigers recorded it for the soundtrack — which became and remains the bestselling film soundtrack of all time, in the ballpark of 45 million copies. Lowe received a royalty check for just under a million dollars, and this was in the early ’90s. That money allowed him to record The Impossible Bird the way it needed to be done. The album drew critical acclaim and breathed new life into his career.

In his opening set for Costello at Wolf Trap on Aug. 18, Nick broke out one of those songs, “I Live On A Battlefield,” a devastating portrayal of a couple falling apart.

Stream “I Live On A Battlefield” by Nick Lowe on YouTube:

Lowe’s opening set had its share of pageantry. He’s backed by Los Straitjackets, a surf rock revival band who wear lucha libre (Mexican wrestling) masks. That sounds like it could be a joke, but it’s not. These guys can really play. Lowe has a uniquely sardonic, off-kilter wit, tied to a love of old-school rock and pop, and that makes for a pretty good match with this band.

Lowe has an extensive songbook, and he had limited time on stage. He started out with some of his more recent material — recent in terms of a 50+ year career: “So It Goes,” “Raging Eyes,” and “Without Love.” He’s said that “You Inspire Me” was itself inspired by the movie As Good As It Gets, where Jack Nicholson says the line, “You make me want to be a better man.”

After “Tokyo Bay,” a cut from a recent EP, he left the stage to make a quick costume stage, and Los Straitjackets took over, playing a few instrumentals. When Lowe returned, they performed “Trombone,” then delivered on a few of his much older, classic cuts to close the set: “Half A Boy and Half A Man,” “Cruel To Be Kind,” and “When I Write The Book.” That last one was a cut with Rockpile, a band Nick was in with Welsh roots rocker Dave Edmunds; they did some  excellent work, and they have an interesting, complicated history as a result of music business legal machinery.

If he’s only had brief flirtations with mainstream success, Lowe’s place in history is secure. He’s a major figure in pub rock, punk, and Americana. Costello has achieved that mainstream success while working in, if anything, an even more diverse range of musical styles: His catalog includes collaborations with pop composer Burt Bacharach and legendary New Orleans composer and producer Allen Toussaint. Costello’s father, Russ, sang in big bands; one of the delights of his memoir is seeing just how involved he was in that world, even as his parents split up in the face of his father’s infidelity.

The constraints of live performance prohibited Elvis from displaying his full musical range. One of his more recent releases, Spanish Model, features guest artists covering This Year’s Model, but with the lyrics in Spanish; obviously, it’s not practical to recreate it on the road. But Elvis did have an excellent vocalist with him in Nicole Atkins, who we covered here last month, and who makes fantastic music of her own. Nicole joined Elvis at the front of the stage during the middle of the set to duet on “My Most Beautiful Mistake” and “Still Too Soon To Know.” That first song hails from Elvis Costello & The Imposter’s 2022 album, The Boy Named If, released by EMI Records.

Stream “My Most Beautiful Mistake” by Elvis Costello & The Imposters (with Nicole Atkins) on YouTube:

Speaking of who he had with him, Charlie Sexton, who’s also worked extensively with Bob Dylan and a whole slew of critical favorites, played guitar. I can confirm that Charlie is still quite tall, very good looking, and has exceptional hair. If you saw the movie Blaze, you’d know him for having played Townes Van Zandt. Steve Nieve, who was inducted into the Rock & Roll Hall of Fame as a member of the Imposters, played keyboards and synthesizers.

If Costello’s musical style is diverse, he lyrics are just as broad. “Watching the Detectives” is a noir story. “Either Side of the Same Town” is from The Delivery Man, his 2004, rootsy, maybe even Americana concept album about a murderer who gets out of prison. This is where I came on board with Elvis; I saw him at Austin City Limits that year (along with Patty Griffin, Sheryl Crow, Joe Ely, and The Neville Brothers). It’s his spin on the classic trope of the two sides of the tracks.

People give John Darnielle (The Mountain Goats) rightful credit for making an entire album entirely about professional wrestling (Beat The Champ makes you feel for the human stories of the men behind the wrestlers, and it’s great), but Costello had already written a song influenced by the “sport” of kings: “The Man You Love To Hate.” When Costello — birth name Declan MacManus — was a child, there was a wrestler in the local circuit — and these things were very, very local — “The Man You Love To Hate” Mick MacManus. People would ask his grandmother if they were related, and she hated it. It stuck in his head though, “The Man You Love To Hate.” Earlier in his career, he even came to identify with it — he was something of an enfant terrible.

As terrible as he may have been, there’s no denying the deep feeling in his songs, like “Penelope Halfpenny,” about a teacher he had around the age of 13. That one is from this year’s LP, The Boy Named If. Before the song, he described the teacher as somewhat out of her element, unlikely to remain in the field for any length of time. But though she was unsuited to the job, she instilled in the students a sense that would everything would be okay if they would just be kind.

The set featured many of Elvis classic hits — “Mystery Dance” from My Aim Is True, “Pump It Up,” from this Year’s Model, “Accidents Will Happen” and “Green Shirt” from Armed Forces, and some great ballads: “What If I Can’t Give You Anything But Love?” and “Magnificent Hurt.”

I know Elvis has a sense of humor, so I’m going to end with a joke, just for him. In his memoir, he says he never wanted to make My Aim Is Still True. Now that he’s pushing 70, he’s probably happy just to hit the bowl.