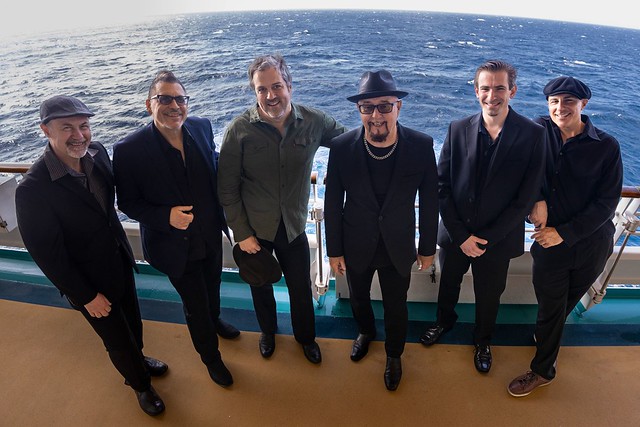 The Fabulous Thunderbirds (Photo courtesy of the band)

Kim Wilson, the face of Austin-based Texas blues outfit The Fabulous Thunderbirds, made his way into the crowd at The Birchmere recently carrying a mic. Kim has spent a lifetime in bars, juke joints, and music halls, and he’s seen and done it all. When he realized the mic wasn’t live, there was only the slightest moment as he made the mental adjustment to sing with his unaided voice, wading through the crowd, placing a hand on a shoulder here and there, connecting with fans, many of whom have followed the band for decades.

When I say decades, The Thunderbirds have been playing longer than I’ve been alive. They’ve been through many labels, and they’ve flirted with mainstream success. In 1986, their song “Tuff Enuff,” became a major hit, after they’d spent four years in a bit of a commercial limbo. The song is still a staple of their live sets. They closed with it at The Birchmere on Aug. 17 — to a rousing ovation. Though The T-Birds would never reach that level of commercial success again, they’d maintain a dedicated following especially among blues enthusiasts, and they’ve played an important role in keeping that music — the tradition of the Texas blues — alive.

Watch the official music video for “Tuff Enuff” by The Fabulous Thunderbirds on YouTube:

Their influences aren’t just limited to the Texas blues though, as the covers in their set showed. They played “Early In The Morning” by Junior Wells, who was a mainstay of the Chicago scene,” and “I’m On Holding On” by another Junior associated with electric Chicago blues, Parker.

When I say that Kim has seen it all, some of that comes out in the stories he shares. At The Birchmere, he explained how he wrote one song “a long time ago on going from Waco to Austin.” He described “everyone in Waco” as “in prison or waiting to go prison.” (Waco, if you don’t remember, became notorious when the FBI raided the compound of the Branch Davidian cult.) The story got progressively stranger, involving a vast number of satellite antenna dishes and a lot — I mean, a lot —  of guns. As Kim put, “too many antennas and guns.” When someone from Texas tells you there were too many guns, you know for damn sure there were too many guns.

The T-Birds are somewhat traditionalist, serving up originals that do well a lot of the things the blues do. There are songs getting down — “If You Want Your Love Tonight” — and songs about being mistreated –“Please Be Good.” There are proclamations of one’s character: “I’m A Good Man,” which contrast perfectly with songs about the nightlife and good times, like “I’m Stepping Out.” There are pleas to a lover: “Come Back Home To Me,” and there are songs about that long, winding road we travel, both literally and metaphorically (“Gonna Hit That Highway Back”).

In addition to vocal duties, Wilson also handles the harp (in blues lingo, harp is slang for the harmonica). After the band left the stage, he did a solo number, with just his harp, singing the crowd out for the night. The band was neither a stripped-down rock unit or a big band; there were a was a couple saxes on stage, along with with the usual guitar, bass, and drums.

The T-birds are a tight unit of musical pros, skilled players, well versed in the blues, with a little bit of rock’n’roll, and they’re an Austin institution. Ironically, though I spent nearly two years in the capitol of Texas, I never caught them while I was there. But I finally have. You should see them too when they are in your town.