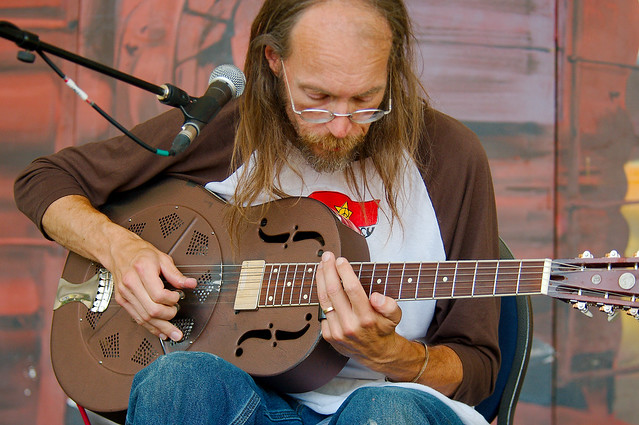 Charlie Parr strolled onto the stage at the Black Cat and promptly sat down, plugged in his guitar, and started playing. What followed was a fantastic and intimate performance that I will never forget.

The Minnesota native is on a world tour that includes stops in Germany, Denmark, and even Israel! Talk about not being in Kansas anymore (or in this case, Minnesota). On Oct. 11, I had the pleasure of seeing him here in DC at the Black Cat.

Charlie released his latest album, titled Dog, in early September through Red House. According to Charlie, the 10-track album is “about folks trying to get along when the atmosphere around them makes it difficult.”

The crowd in the Black Cat gathered to the front of the stage to get a good view of Charlie as he played. He was sitting down, so that made that a bit difficult — but it also added to the intimacy of the show. In between songs, Charlie talked about his van (which we later found out is a “mom” van) and his adventures from around the country. A lot of musicians joke and have fun, but Charlie actually made me laugh out loud with his subtle and honest humor.

I haven’t even mentioned Charlie’s musical talent. Charlie has a fantastic voice and plays a blues/folk guitar as good as anyone you will find. On Wednesday, he switched between an acoustic 12-string guitar and an electric guitar as he played some of his most popular songs including “1922 Blues,” “Over the Red Cedar,” and “Cheap Wine.” You can check out these songs below on Soundcloud.

One thing that struck me is that Charlie really does this because he loves it. It is his life; it is not a job. According to his website, he plays up to 300 shows a year. He didn’t have anyone set up for him, he just walked on stage and plugged in. Before the show he could be seen in the corner leaning against the wall and talking to fans. He didn’t once promote his new album other than to simply play the songs.

With the amount of touring Charlie does, chances are you will have an opportunity to see him. Keep an eye out for him coming to your town. If you do go to one of his shows, make sure you get there early and get a good spot. Until then, check out those memorable songs below.