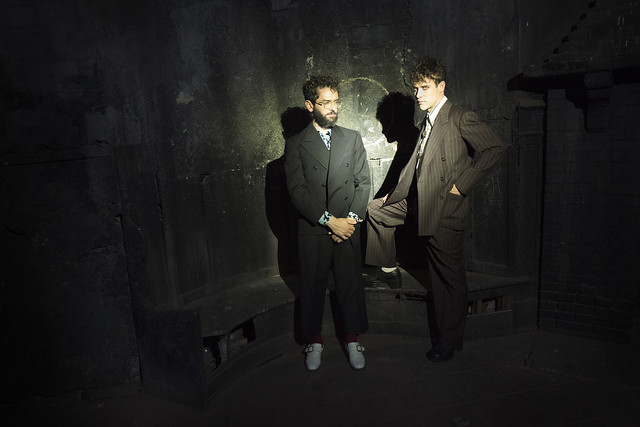 Last month, I reviewed a terrific live show by The Wombats at 9:30 Club. The show sold out in a heartbeat, the band were enthused, the audience went nuts—it was a good time.

But I wouldn’t even know who The Wombats were if I hadn’t first heard them at Liberation Dance Party at DC9.

Next month, MGMT will perform at The Anthem. It will be crazy. The neo-psychedelic darlings have a new album coming out this Friday. I wouldn’t have heard about it nor would I have been among the first to hear their infectious breakout single “Electric Feel” back in 2008 if it weren’t for… Liberation Dance Party at DC9.

DJ Bill Spieler is hosting two editions of Liberation Dance Party, affectionately called LDP, in February on Friday, Feb. 9, and Friday, Feb. 23. And he’s already “doing it again,” tapping into the brightest new bands before they become the biggest new bands and introducing them to patrons who dance the night away in his cozy club at U and 9th Streets NW, DC.

For example, Bill has championed glam Angelinos Starcrawler with their catchy song “I Love LA” in regular LDP rotation. And on top of that, DC9 hosts Starcrawler in concert on Feb. 17. LDP has been playing songs by Pale Waves prior to their show at U Street Music Hall on April 11. And of course, Bill and LDP were way ahead of all of us when it came to Sofi Tukker, who are blowing up 9:30 Club on April 18.

Since 2004, Liberation Dance Party has been a valuable go-to source to discover the best new music, and to see music videos, before those bands come to town. As an MTV kid back in the day, going to Liberation Dance Party for me carries a similar aesthetic in that you are exposed to a great mix of cutting-edge indie rock, and you get to watch music videos (now while enjoying an adult beverage).

Don’t simply take our word for it. Listen to Liberation Dance Party from Jan. 12, 2018, on Mixcloud:

LDP Tracklisting from January 2018:
1. Laura by Scissor Sisters
2. Bike Dream by Rostam
3. Do You Know Me by Vant
4. Where You at by The Bohicas
5. Slipping Away by Tanlines
6. T-Shirt Weather by Circa Waves
7. Run for Cover by The Killers
8. There’s A Honey by Pale Waves
9. Sober Up by AJR
10. Rich Friends by Portugal. The Man
11. No Roots by Alice Merton
12. Hard to Say Goodbye by Washed Out
13. Bless This Acid House by Kasabian
14. Middle of Nowhere by Hot Hot Heat
15. Lemon to a Knife Fight by The Wombats
16. High Enough by K.Flay
17. Colors by Beck
18. Doing It for the Money by Foster the People
19. L.E.S. Artistes by Santigold
20. Los Ageless by St. Vincent
21. Bubblegum by Confidence Man
22. Losing My Edge by LCD Soundsystem
23. Bonkers by Dizzee Rascal & Armand Van Helden
24. Do What You Want by The Presets
25. Hey Heartbreaker by Dream Wife
26. Take Me Out by Franz Ferdinand
27. Bike Dream by Rostam
28. Just Dancing by Sylvan Esso
29. Late Night by ODESZA
30. Feel Good (feat. Daya) by Gryffin & Illenium
31. High by Sir Sly
32. Always Ascending by Franz Ferdinand
33. Mr. Brightside by The Killers
34. Dancing Shoes by Arctic Monkeys
35. I Love LA by Starcrawler
36. Chelsea Dagger by The Fratellis
37. I Love You, Will You Marry Me by YUNGBLUD
38. Call Ticketron by Run the Jewels
39. Falls (feat. Sasha Sloan) by ODESZA
40. Shut Up and Dance by Walk the Moon
41. Creature Comfort by Arcade Fire
42. tonite by LCD Soundsystem
43. Boyfriend (Repeat) by Confidence Man
44. Chicken Moose Rhino Monkey by Cousin Cole
45. Age of Consent by New Order
46. Young Folks by Peter Bjorn and John
47. Broken by lovelytheband
48. Are You Going to Be My Girl by Jet
49. Feel It Still by Portugal. The Man
50. Paddling Out by Miike Snow
51. Door by Nice as Fuck
52. Electric Feel by MGMT
53. Perfect Places by Lorde
54. Mansard Roof by Vampire Weekend
55. 12:51 by The Strokes
56. Radio2 by Sylvan Esso
57. Not in Love by Crystal Castles
58. And I Was a Boy from School by Hot Chip
59. Deadbeat Summer by Neon Indian
60. My Type by Saint Motel
61. Shut Up and Let Me Go NEW by The Ting Tings
62. Best Friend by Sofi Tukker
63. D.A.N.C.E. by Justice
64. Sometimes I Feel So Deserted by The Chemical Brothers
65. Ready for The Floor by Hot Chip
66. Lights & Music by Cut Copy
67. Hot Thoughts by Spoon
68. Is This Love by Clap Your Hands Say Yeah
69. A-Punk by Vampire Weekend
70. Deceptacon by le Tigre
71. Break the Fever by MUTEMATH
72. L.A. by Theme Park

As you can see from above, Liberation Dance Party also has a distinct personality, cultivating music over its long run and recalling the entire catalog of indie bands it has introduced to DC.

Make a point to go this month to dance to the best new music. Admission is free.