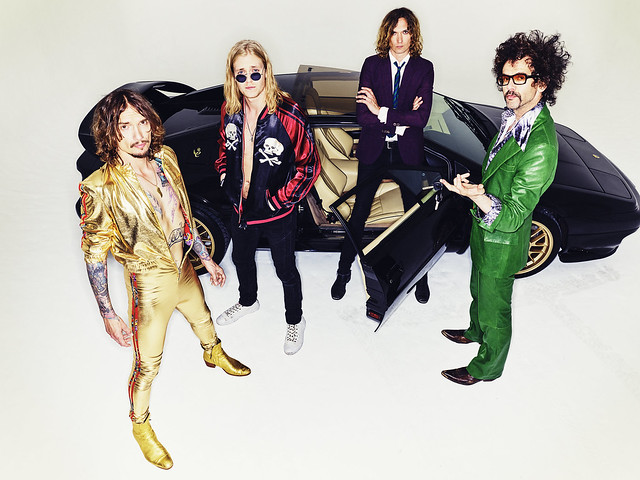 Yahoo! raved, “The Darkness are ìback with an album of guitar-shreddery and Bic-flicking badassery!” To make the album, Justin Hawkins (vocals / guitar), Dan Hawkins (guitar), Frankie Poullain (bass), and Rufus Tiger Taylor (drums) collaborated with producer Adrian Bushby to record sings like the hard-rocking, autobiographical “All the Pretty Girls,” the swashbuckling “Buccaneers Of Hispaniola,” the howling “Southern Trains,” the feel-good anthem “Happiness,” and the emotional “Why Don’t The Beautiful Cry?”

Watch the official music video for “All the Pretty Girls” by The Darkness on YouTube:

When The Darkness came through our area to perform at The Fillmore Silver Spring in 2015, we said, “So much does Justin wear his influences on his sleeve that he bears the images of the four members of Queen from the album Hot Space on his fingers as part of the weave of tattoos covering his body. The glam metal favored by Justin sometimes turns up in the music of Queensryche, KISS, or The Scorpions, but The Darkness fully embraces it in such a way that gives their music an extraordinary level of continuity and dance-ability.