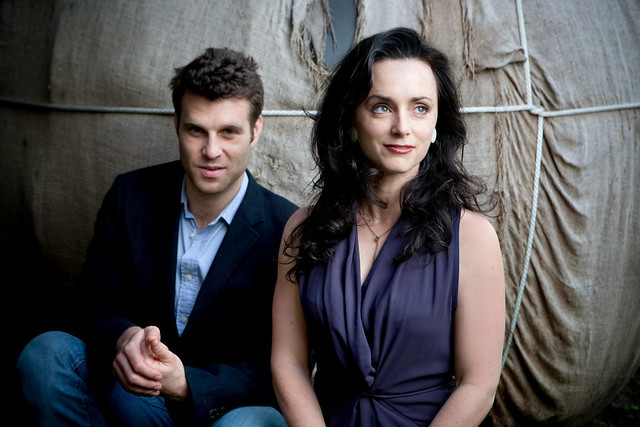 Molly, who spent a decade in musical hotspot Austin, regularly tours and records as part of the all-female folk trio Red Molly. The name is just a coincidence; Molly replaced one of the founding members. Eben, a Maine native, attended the prestigious conservatory at my alma mater, Oberlin College, studying performance, graduating the year after me. The couple resides in Molly’s hometown of New London, Connecticut, with their two-year old son Otis.

Goodnight Moonshine, which tours with upright bassist Max Chilenski, was joined Thursday by Roosevelt Dime drummer Tony Montalbano. They released a new folk-pop album, I’m the Only One Who Will Tell You You’re Bad, on Friday, and they played many of the songs from it at Pearl Street Warehouse. Several of these songs deal with the transition to family life, like “Settled,” in which Molly sings about how they never “tried psychedelic mushrooms” or “had that threeway in Paris” before they had a child.

In addition to folk-pop, Goodnight Moonshine also covers some country songs. Taking advantage of Molly’s powerful voice, they played two songs made famous by Patsy Cline, “Crazy” and “After Midnight.”