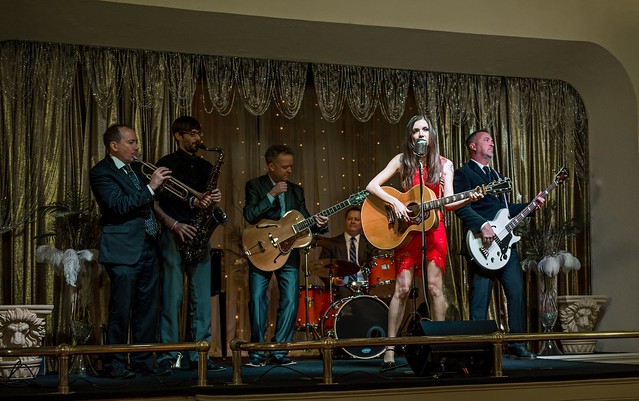 Karen Jonas, a resident of Fredericksburg, Virginia, and a native of Damascus, Maryland, headlined Saturday evening at Pearl Street Warehouse with a release party for her new album, Butter.

Karen financed the new album on Kickstarter after experiencing frustration with the music industry. I had the opportunity to talk to Karen, and she told me that, in one case, she encountered blatant discrimination when a deal in the works fell through after she revealed that she was pregnant with her third child.

Karen wore a shimmering silver number, and she was accompanied by a backing band that included horns. They played through the new album, and Karen discussed some of the songs. She talked about how the title track, on which she sings suggestively about how “mama cooks with butter,” relates to being a mother of four. “Mr. Wonka,” she said, was about a music industry executive who thought he could help her, but ended up wasting her time.

After she finished performing songs from her new album, Karen sang the title tracks from her first two albums, “Oklahoma Lottery” and “Country Songs.” This finished her set, and the band left the stage to a round of applause. Two particularly boisterous gentlemen cheered for an encore, spurring the crowd to get louder until Karen and the band returned to the stage. They played a Bob Dylan tune, and sent the audience home with John Prine’s “Angel from Montgomery.”

Listen to Butter by Karen Jonas on Bandcamp:

In addition to playing with the Linemen, Kevin runs a rare book business in Baltimore and has written two books on classic film noir. The Linemen count famed writer and DC-area resident George Pelecanos as a fan.