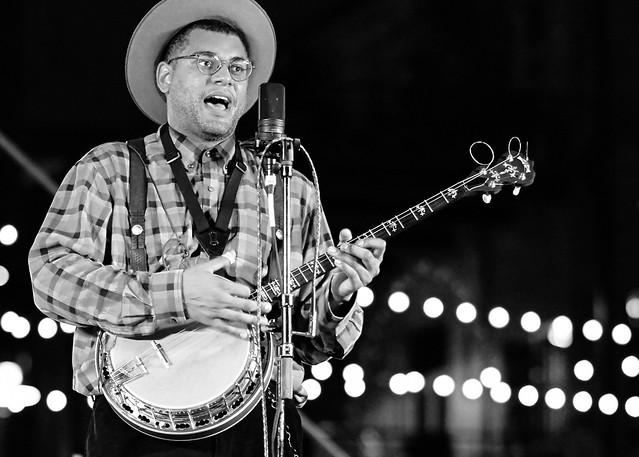 At the Kingmans Island Bluegrass and Folk Festival on Saturday, I endured sun and rain, met some cool dogs, suffered for some ice cream, and most of all experienced some very good bluegrass, Americana, and blues bands on one full day.

The Gina Clowes Project, also a bluegrass band, appeared next, fronted by banjo virtuoso Gina Clowes, who also plays in Chris Jones & The Night Drivers. Gina hails from of Front Royal, Virginia, and her band is unusual for its nearly all-female lineup, including Gina’s sister. Bluegrass is a genre dominated by men. By this time, the sun had come out, and the crowd started to fill in the space. Like the previous act, the Gina Clowes Project played both original and cover material to an enthusiastic reception. Gina also will perform at The River and Roots Fest in Berryville, Virginia, on Friday, June 29.

One of my personal highlights of the festival followed Gina: Americana singer-songwriter Dori Freeman, who was accompanied on drums by her husband. Dori, who lives in Galax, Virginia, told the audience that they had just driven up the night before from Florida, where they had taken their five-year-old daughter to visit Disney World but “never again.” Her husband said, “Tell your children princesses are real.” Dori played several new songs, in addition to songs from her two albums and a few covers. In the packed crowd, umbrellas had come to ward off the baking sun, but festival-goers were delighted by the sound of Dori’s music. She’ll be in Mount Solon, Virginia, on Friday, July 13 for Red Wing Roots Festival.

Kingman Island is the best for making new canine friends. Earlier in the day, I met the first of several new dogs I would make, a Chinese Crested named Falcor! After Dori, I got up to go the water station. On the way back, I met a couple with a mutt that I would have thought was impossible: a chihuahua/German shepherd mix. I had many questions.

After Dori, things changed up with DC’s own The Bumper Jacksons, an all-Americana mix of jazz and country, swampy roots in Florida and the Big Easy, Appalachian wanderings, a Jewish-meets-world music childhood, trumpeting and bird calls born in Music City, and more. Somehow, this unique band combined the sounds of guitar, banjo, pedal steel, clarinet, trumpet, trombone, and drums, and somehow they missed my radar before now! And that’s a shame, because they were fantastic. The Bumper Jacksons had the audience up and dancing, even in the blistering heat. They play the 9:30 Club on July 14, and I can’t wait to see more of these incredible musicians.

The heat had really picked up by this point, and I got in the rather long line for the food truck selling ice cream. As I neared the front of the line, the sky darkened, and the temperature dropped appreciably. Falling prey to the sunk costs fallacy, I decided that, having put in the the time in long for ice cream, I was darn well going to get ice cream. This proved an exceptionally poor choice, as rain began to fall as I was eating my ice cream cone. The moral of this story is that you should not fall for the sunk costs fallacy, because it will come back to bite you in the butt.

Meanwhile, on stage, the crew was setting up for the American Songster Revue, the second act on the bill. As the rain fell, a flash of lightning in the distance lit up the sky. After a bit, Dom Flemons, formerly of the Carolina Chocolate Drops, came on with his banjo and played a song to satiate the crowd’s anxiety. After he finished the song, he said that the crew was working on overcoming some technical difficulties and the American Songster Revue would be on shortly.

A few minutes later, an elegantly dressed older gentleman came on stage to formally introduce Dom. The American Songster Revue featured Dom and several other prominent African-American roots music artists: Kamara Thomas, formerly of the Brooklyn-based indie power trio Earl Greyhound; Amythyst Kiah, a Southern gothic alt-country/blues singer-songwriter from Johnson City, Tennessee; and blues musician, author, teacher, and actor Guy Davis. These artists had to fight for the crowd against the rain, but they won. They were all great, definitely worth seeing! Dom Flemons is appearing at The Birchmere’s Old Time Banjo Festival on Sunday, June 17.

Between the American Songster Revue and headlining act Gangstagrass, DC native Jonny Grave, who’d been working as announcer throughout the day, performed for about 25 minutes. Singing the blues, Jonny cleansed the crowd’s palate and warmed them up. Although it was after 7pm and the crowd had endured both heat and rain, Jonny got a pretty good response out of them.

Gangstagrass combined two very different forms of American music: bluegrass and hip-hop. A bluegrass quartet (guitar, resonator guitar, banjo, and fiddle) played and sang in traditional style, with the twist that two MCs take turns rapping to the music. Gangstagrass plays traditional songs, like “Man of Constant Sorrow,” brought to popular attention by the film “O Brother, Where Art Thou?,” as well as their own original numbers.

The group’s banjoist, Dan “Danjo” Whitener, informed the crowd that he is a DC native. He also told that it was the birthday of his mother, who was in the crowd. The audience summoned a second wind for Gangstagrass’s set. They got up on their feet and danced, and a beach ball was volleyed around. Humorously, one poor guy got the beach ball spiked right into his nose. At the end of Gangstagrass’s set, everyone shouted, “Encore! Encore!” The band said they had time for one more, and played the Emmy-nominated theme to the series Justified, “Long Hard Time to Come.”

Thus concluded the festival. A good time was had by all. If you have any interest in Americana music, you should definitely head out to Kingman Island Bluegrass and Folk Festival next year — and you should go see these terrific artists! Keep tabs on it at http://kingmanislandbluegrass.info.