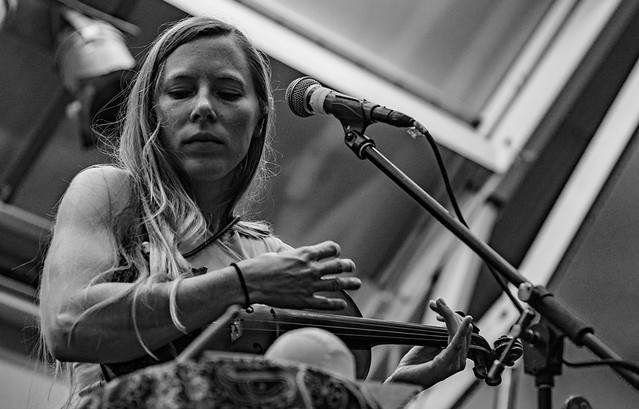 If making an album has become a lost art, then River Whyless is doing its best to revive it. Celebrating the release of their new record, Kindness, A Rebel (Roll Call Records), the band performed on a warm summer evening Friday to a relaxed, picnicking crowd at Grist Mill Park near George Washington’s sprawling country estate, Mt. Vernon.

After two albums, an EP and years of crisscrossing the country performing in venues big and small, River Whyless had reached a crossroads, each member taking stock of their lives, where they had been and, most importantly, where to next? The question was more than musical, for each members’ lives had irrevocably evolved since they’d first come together nearly seven years before. Although technology has certainly made it possible for a band to record remotely and still function as a unit, for River Whyless physical proximity became paramount in the making of Kindness.

And so, Halli Anderson (violin, vocals), Alex McWalters (percussion), Ryan O’Keefe (guitars, vocals), and Daniel Shearin (bass, vocals) assembled together in a southern Texas studio to write and record Kindness. Halli observed that the experience “remind[ed] me of where I belong” and that the proximity of working with her bandmates in the studio reaffirmed a “feeling of openness and hope and acceptance.”

The new album’s title, Kindness, A Rebel, implies contradiction, diametrically opposed concepts — the songs reflecting the tensions between love and hatred, tolerance and violence. Certainly, the new songs tackle some pretty heavy topics: loyalty, stability, and maturity contrasted with one’s darker impulses — betrayal, abandonment, and cruelty. But lest you think each member takes themselves too seriously, they each set aside their egos to make the album, opening up to an honest, collaborative process that has resulted in a musically daring and lyrically important record.

The evening’s performance began with an older obscure track, “The Hunt,” with its precisely finger-picked opening chords and Daniel’s harmonium gradually building to Alex’s driving percussion and Halli’s Appalachian influenced fiddle. And the song’s sublime three-part harmony let us know we were in for a musical treat for the next hour. “All of My Friends” a quiet, calming number from the new album, followed.

The third song, “Kalangala,” took us back to 2016’s “We All The Light,” Alex’s imaginative syncopated percussion and Ryan’s delicate guitar lines propelling the song’s light as air melody. From there, we dove into the new songs, including the powerful “Born in the Right Country,” the poignant “Motel 6,” and “Failing Farm” with its slightly twisted lyrics, the latter introduced by Halli and inspired by her father who would tell stories to his kids to purposefully frighten them into obedience.

See the new video for “Born in the Right Country” by River Whyless on YouTube:

Three more new songs — “Van Dyke Brown,” “New Beliefs,” “The Feeling of Freedom” — rounded out the middle section of the show. This new album explores new territory for the band, making a significant musical statement — socially, politically, personally. As Ryan said, “This album gets to a deeper area than any of our others before it.” When he sings in “Motel 6,” “I drive into the night, I drive into a life that I deem worth living all my life,” he speaks for the whole band as they recommit to each other as a unit, yet inevitably follow their own life paths.

River Whyless promised to come back to the DC area in the fall. Until then, find their music and future tour dates at https://www.riverwhyless.com. Here are some pictures of River Whyless performing in Grist Mill Park on June 8, 2018. All photos copyright of Mark Caicedo. 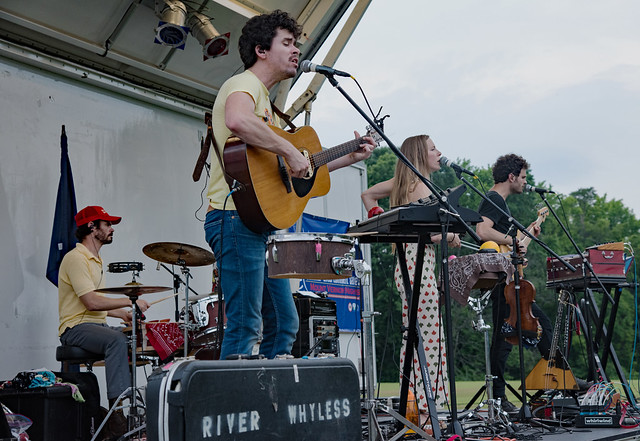 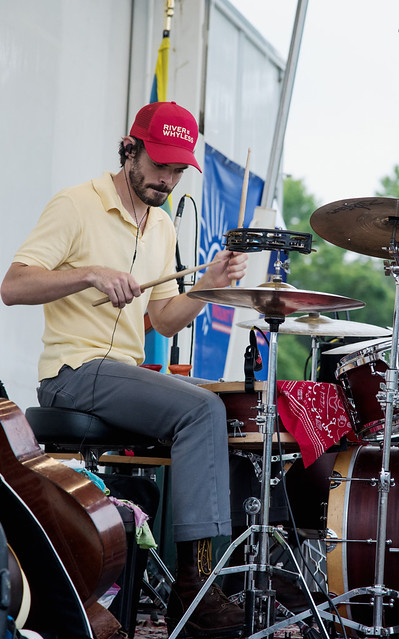 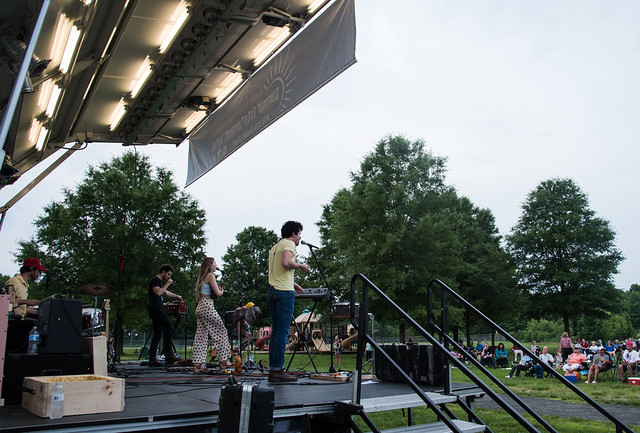 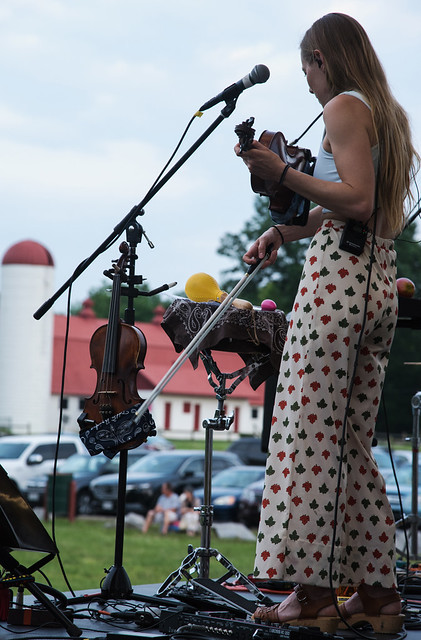 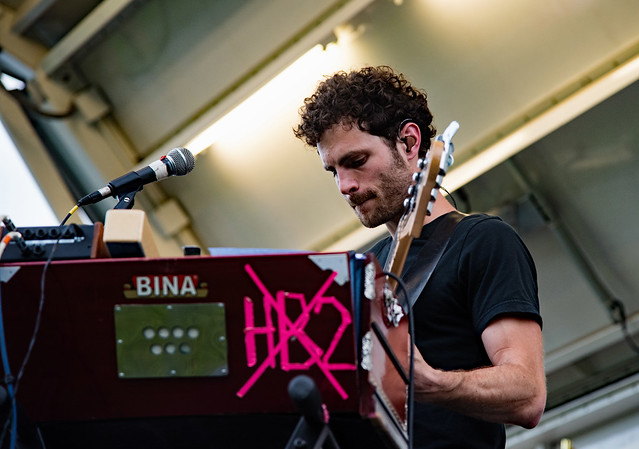 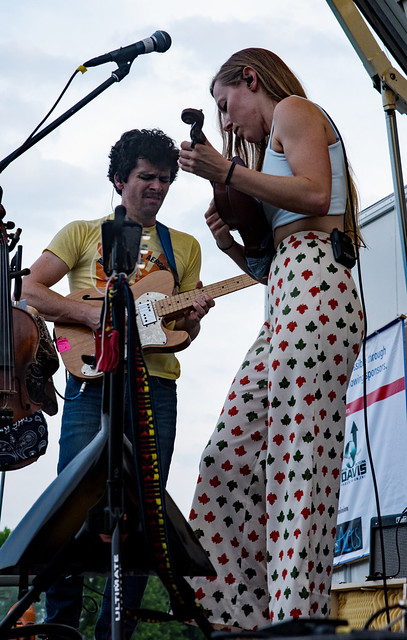 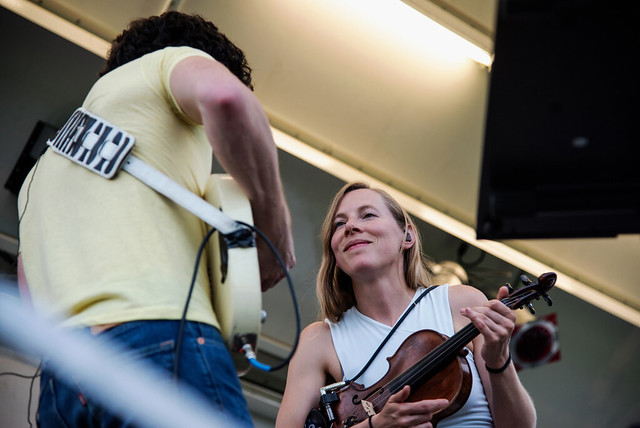 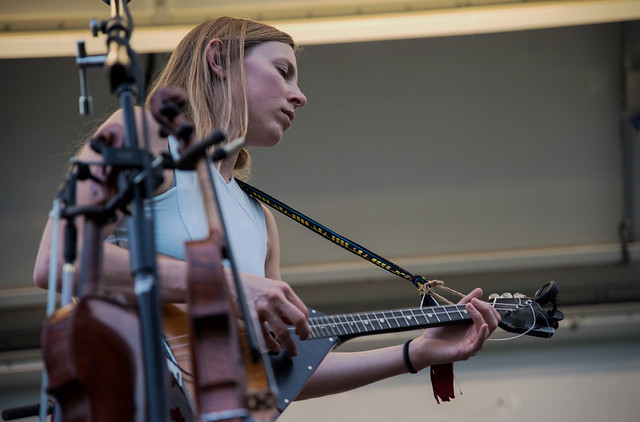 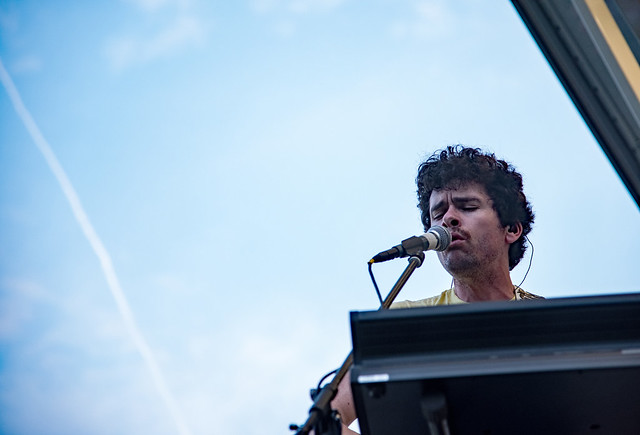 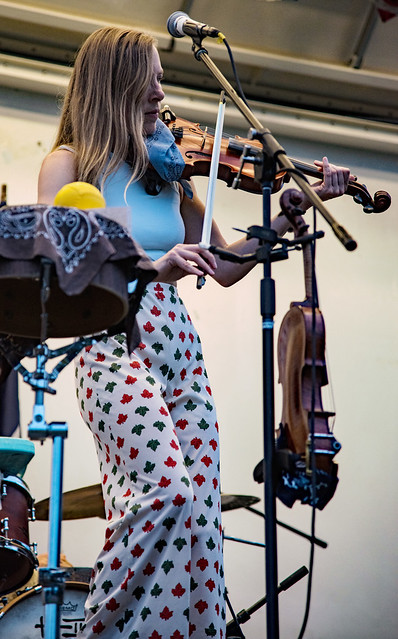 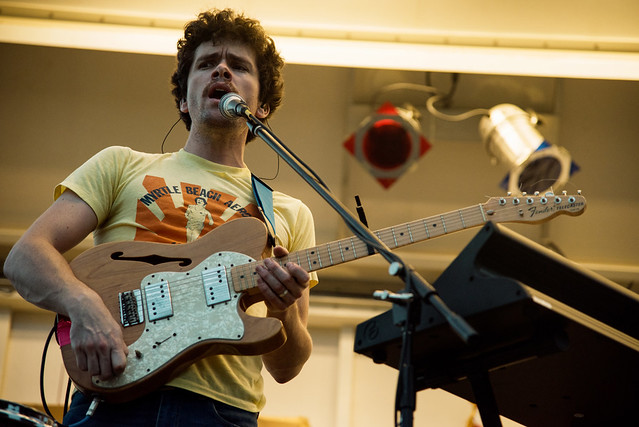