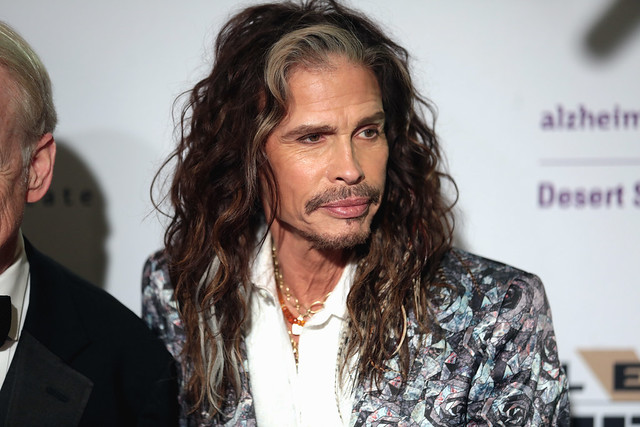 Steven Tyler hasn’t taken it easy on himself. The 70-year-old Aerosmith frontman has been to drug rehab (and is currently sober), battled Hepatitis C, and had surgery on his knees and feet. As a fellow concertgoer at Wolf Trap put it, “He was an animal.”

If you saw “The Demon of Screamin’” in action at the Filene Center last Thursday, you wouldn’t have guessed that he’s been through any of this. Steven put in a high-octane performance, movin’ and groovin’ as only he can do.

Grabbing the mic stand, he strutted from one end of the stage to the other. He shook and he gyrated, and even at his age many of the women in the audience still went more than a little wild for him. Steven had the audience on their feet nearly the entire show. He had the crowd eating out of the palm his hand.

Although Steven wasn’t backed up by the Bad Boys from Boston, this was for all intents and purposes an Aerosmith show, and he sang many of the band’s hits. He opened the concert with “Sweet Emotion,” and immediately segued into “Cryin.’” The main set also included “Jaded,” “Livin’ on the Edge,” and “Dream On,” which had the audience singing along with Steven. In his encore, Steven sang “Janie’s Got a Gun” and “Walk This Way.” Curiously, Steven didn’t sing either of Aerosmith’s two biggest hits, “Don’t Wanna Miss a Thing,” from the 1998 movie Armageddon, which climbed to #1, or the 1988 #3 hit “Angel,” from the album Permanent Vacation.

In addition to Aerosmith songs, Thursday’s show featured two songs off of Steven’s recent solo country-rock album, My Own Worst Enemy. Steven sang two Beatles songs, “I’m Down/Oh Darling!” and the Aerosmith interpretation of “Come Together.” To my delight, he included two songs made famous by the greatest woman in rock, Janis Joplin: “Mercedes Benz” and “Piece of My Heart.” The capstone to the classic rock came with the last song of the night, Led Zeppelin’s “Whole Lotta Love.”

While it wasn’t Aerosmith, Steven’s backing band, Loving Mary, were solid pros. A six-piece (lead guitar, rhythm guitar, bass, banjo, fiddle, and drums) country-rock outfit, Loving Mary accompanied Steven on a previous solo tour in 2016. Their leader and lead guitarist, Marti Frederiksen, has a long association with Steven as a writer and producer for Aerosmith dating back to 1997. Marti has also worked with country megastars Faith Hill and Carrie Underwood.

During the concert, Steven called attention to a facet of Marti’s work that the audience might have been more familiar with. Years ago, Marti took Steven to see the film Almost Famous. While the band Stillwater played “Fever Dog,” Marti whispered to Steven, “That’s me singing lead vocals.” At Steven’s urging, Marti sang a few a bars of “Fever Dog” for the crowd.

On a video shown before he took the stage, a much younger Steven said, “I’m going to rock until I drop.” This may be still true, but it seems like it’s going to happen much later than anyone, including Steven, would ever have predicted. As my friend Paul said, “All things considered, he is a survivor.” But Steven isn’t just surviving—he is thriving, still going out there and singing his ass off.