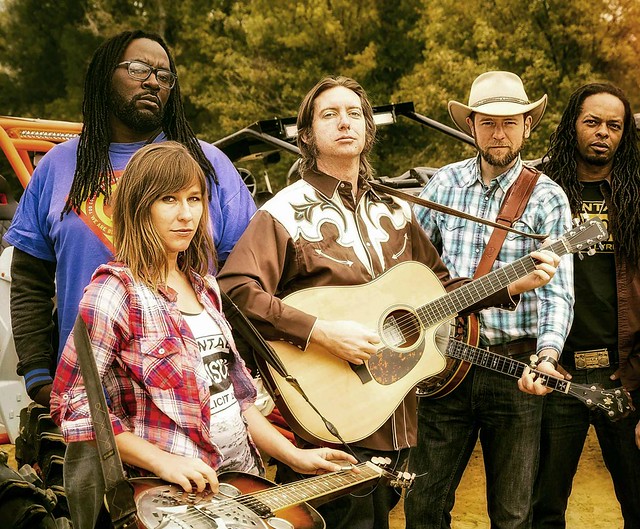 I ran into a couple from Baltimore, professional musicians, one of whom was wearing a shirt that read “There are four lights.” This is a reference to the Star Trek: The Next Generation episode “Chain of Command, Part II,” in which Captain Picard is captured and tortured by the Cardassians, who try to break him by getting him to say that four lights are in fact five lights, to deny the reality of his senses. As I was conversing with these lovely people, R-Son walked by and saw the shirt, and he lit up with recognition. He explained that, in his home city of Philadelphia, he hosts a podcast called “Black Tribbles,” a reference to the original Star Trek episode “The Trouble With Tribbles,” about a cute, cuddly species that reproduces almost beyond comprehension. One of my people indeed.

Gangstagrass, formed in 2006 by Brooklyn producer and guitarist Rench, is best known for the Emmy-nominated theme to the FX program Justified, “Long Hard Time to Come,” but the crowd was familiar with many of their other songs. “I Go Hard” was a crowd favorite, as was the band’s cover of “Man of Constant Sorrow,” made known to contemporary audiences from its inclusion in the Coen Brothers film O Brother, Where Art Thou?

Dan “Danjo” Whitener, the banjo player for Gangstagrass, played the song he placed in Spike Lee’s new film Blackkklansman, “We Are Gonna Be Okay.” Dan, a DC native, also announced the engagement of his brother, who was in the crowd with his fiancee.

Listen to the latest by Gangstagrass on SoundCloud:

If you haven’t heard Gangstagrass, you might have questions about the plausibility of blending bluegrass and hip-hop. It’s not unreasonable to think that these are very different styles of music with very different origins, and that combining the two is not the natural thing in world. Bluegrass has expanded, especially in recent years, to include progressive bluegrass, importing the music from other genres into bluegrass style (and includes some really big names like Béla Fleck, Nickel Creek, and Chris Thile).

Meanwhile, the biggest hip-hop star in the world right now is Childish Gambino, and part of what makes him so interesting is that he bursts conventions like plastic packing bubbles. Thematically, the two actually mesh pretty well. Bluegrass songs are often quite dark, full of murder and mayhem, and rap lyrics just offer another approach to much of the same material.

One thing’s for sure about Gangstagrass: They’re a unique act. You won’t see anyone else like them. They throw a heck of a party, so get out there and see them!