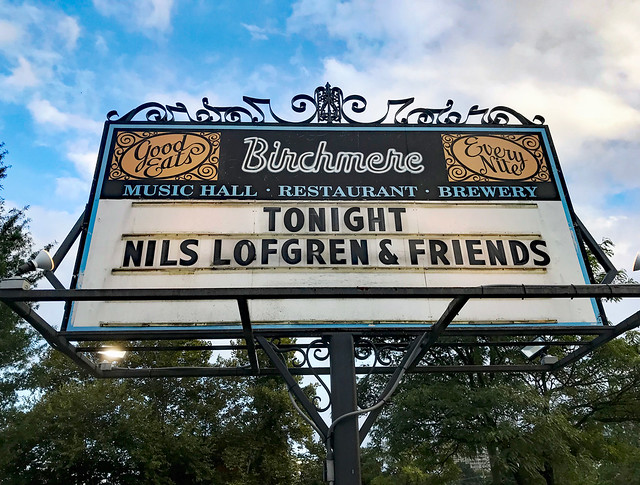 “Years later…Martin would try to find the words to articulate the power of  togetherness in a world where togetherness had been corrupted — and to explore the  effect of the music, the surprising lengths the people had gone to to hear it and to play it, as evidence that music, and art in general, are basic requirements of the human soul.” Jessica Shattuck, The Women in the Castle

With the words, “Welcome to The Birchmere, thanks for showing up,” Nils Lofgren took the stage for the final night of a three-night weekend run in celebration of 50 years on the road.

Although billed as “An Acoustic Evening with Nils Lofgren & Friends,” the weekend turned out to be a family affair with Nils’ 90-year-old mother attending the previous night’s show, his wife Amy in the audience, and the Brothers Lofgren (Tom, Mark, and Mike) sitting in at various points throughout the performance. The lone “friend” onstage was multi-instrumentalist extraordinaire Greg Varlotta (guitar, bass, trumpet, keyboards,
percussion, tap dancing).

If you look up the terms “prodigiously talented” and “under-appreciated” in the dictionary, you’d find a photograph of Nils Lofgren.

Actually, “under-appreciated” may be somewhat inaccurate, because clearly Nils’ peers recognize his musicianship. As a 17-year-old budding rock-and-roller from Bethesda, Maryland, he approached Neil Young after a Cellar Door performance that ultimately ended in an invitation to play piano on Young’s seminal 1971 album, “After the Gold
Rush.”

Nils tells a fascinating story about how, during the recording of “Southern Man,” Nils was fooling around on the piano, playing a polka rhythm that was eventually incorporated into the staccato melody of the song. Nils has continued to work with Young over the last 50 years, recently performing as a member of his backing band, Crazy Horse, in the summer of 2018.

No less than a former Beatle, Ringo Starr, added Nils as a member of “The All- Starr Band” for two tours. But the ultimate backing gig came in 1984, when he joined Bruce Springsteen’s E Street Band — where he has continued to record and tour ever since. Nils is equally adept on piano, accordion, guitar and as we learned harp, so it’s no wonder he’s always been in high demand as a session player as well as band member.

But this night at The Birchmere, we were all there for Nils alone. He played songs from his solo career and his days with Grin, the group he founded in 1971. Originally from Bethesda, one could tell that the moment he stepped onstage, Nils was enveloped in the warmth of longtime friends happy to see the hometown boy performing in The Birchmere’s intimate atmosphere.

The opener, a beautiful “Wonderland,” set the mood with its dreamy, upbeat melody and hopeful lyrics. Rocker “Code of the Road” followed and featured an extended, improvised jam with Nils and his brother Tom sharing lead guitar solos. “Black Books” and “Walkin’ Nerve,” deep cuts from Nils’ back catalog, came next with the latter featuring Greg Varlotta’s stunning trumpet solo.

One benefit of playing live music for 50 years: One knows how to pace a concert. The middle third of the show started with a gorgeous rendering of “Girl in Motion,” a song Nils dedicated to anyone over 50 in the audience (which, of course, was just about everyone). Nils then moved to piano for the lovely “Irish Angel,” a Bruce McCabe cover from the 2011 album Old School. As we moved through the fat part of the set list, Nils started off “Too Many Miles” on harp, intricately plucking out the melody, before moving to electric guitar for the second half of the song.

Did I mention “prodigiously talented?”

Nils then introduced his classic, “Keith, Don’t Go (Ode to the Glimmer Twin)” as having been inspired during Neil Young’s “Tonight’s the Night” Tour in 1973, a reference to a dark time in their lives. Even now, when Nil’s performs the song, a solo acoustic tour de force, one senses the pain and loss embodied in the song’s lyrics. “Hard Lesson to Learn,” a song recorded by Rod Stewart (and a high point in Nils’ songwriting history), featured another of Greg’s stellar trumpet solos.

The final third of the concert took us, in rapid succession, through more Nils deep cuts; “Like Rain,” “Moontears,” and “Mud in Your Eye” (with Greg literally tap-dancing the entire song) in addition to the anthemic “No Mercy” ending the main set.

Most Nils Lofgren fans know he’s an accomplished accordion player (nine years of lessons he informed us) and his rendition of “Flight of the Bumblebee” to open the encore set was a jaw-dropping recital of the classic piece. Nils’ three brothers and Greg rejoined Nils onstage for “Mind Your Own Business,” a classic old-timey country sing along.

Nils dedicated the night’s final song, “Shine Silently,” to his mother. As he sang, “shine silently, no I won’t get lost while your loves shines, shines on me,” I thought how wonderful it must feel to be an artist singing your songs to people who love you, and who you love. We tend to forget that our musical heroes are also mere mortals trying to get through life, doing the best they can, and how important our support for music and art is for them.

If Sunday night was any indication, most of us will be lining up for Nils Lofgren for many more years to come.