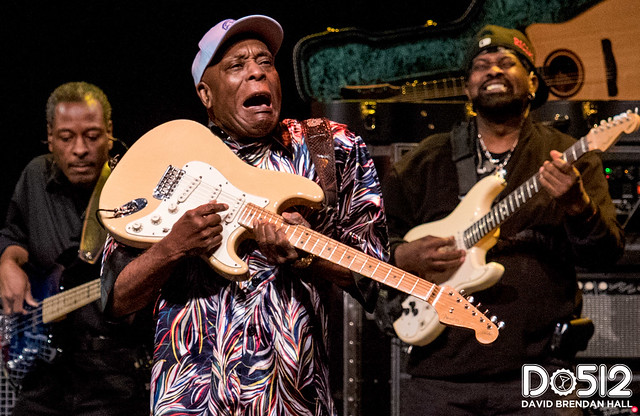 By turns funky, salty, entertaining, and educational, legendary bluesman Buddy Guy brought the party to The Birchmere on Monday. Showing off an arsenal of guitar tricks, playing blues classics, both his own and other artists’, Buddy brought the house down. This show was dirty blues with the fervor of a religious tent revival.

Opening with “Damn Right, I’ve Got the Blues,” Buddy blasted his electric guitar. After the song, he asked the audience if it was too loud. This was almost a rhetorical question; Buddy knew perfectly well that he would get a chorus of “No!” to that question.

Rolling into town, yesterday, Buddy told audience, he was reminded of one his albums, Feels Like Rain. Buddy launched into the title track, a John Hiatt cover, and he cajoled the audience into singing alone on the refrain, “feels like rain.” This was first, but not the last instance of audience participation in this high-energy, upbeat show.

During the show, Buddy reminisced that 61 years ago today, he arrived in Chicago from Baton Rouge, Louisiana with his guitar. He spoke of going to a bar and trying to earn change to call his mother by playing songs from a jukebox. All these years later, he recalled the first tune that someone challenged him to play, and played a few lines of Marvin Gaye for us.

Buddy took the audience to the learning tree, speaking of days long past, when he was youngster working with legends like Howling Wolf and Muddy Waters. He informed that audience that blue language certainly didn’t originate with hip-hop, as he quickly learned that, to the older artists, his name was simply “Motherfucker.”

Marvin Gaye was just one of the artists whose style Buddy showed off for the audience. He asked the audience who the greatest guitar player of all time was, and got a variety of answers. Someone, to Buddy’s satisfaction, said “BB King,” prompting Buddy to do his best imitation of him.

Watch Buddy Guy perform “Stay Around a Little Longer” with BB King in 2010 via YouTube:

Speaking about the history of the blues, Buddy emphasized that white audiences didn’t pay much attention to blues artists until British bands like the Rolling Stones started playing their music. That was when guys like Muddy Waters and BB King started to get mainstream attention. Buddy also acknowledged that some of the Brits, like his friend Eric Clapton, became innovative blues players in their own right, especially in his work with Cream. Buddy played a fair bit of “Strange Brew,” to the audience’s delight.

Jimi Hendrix had also been mentioned as a candidate for the greatest guitarist of all time, and Buddy got around to covering Jimi, too. To be honest, I’m not sure which of Jimi’s songs he played a section of, but Jimi’s characteristic sound is unmistakeable.

Buddy, who is one of the best guitar players in the world, showed the audience all sorts of trick playing. He played over his head, and he played behind his back, and he played one-handed. Buddy played using the friction from pressing his body and his polka-dotted shirt against his guitar.

I’d heard before the show that Buddy has a habit of parading around the audience while playing his guitar. Buddy live up to his reputation, and the crowd rose to its feet, as he strode through the crowd like the Pied Piper. I was just a few feet from this legendary, iconic artist.

Buddy’s drummer, Tom Hambridge, opened for him. A Grammy-winning artist, songwriter, and producer in his own right who has worked with Buddy, Susan Tedeschi, and others, Tom put on one hell of an opening act. He entertained the audience with a hilarious song, “The Upside of Lonely,” about the advantages of living by oneself.

For as much of a reputation as the blues have for being emotionally “down” music, this was one of the most rejuvenating, positive experiences I’ve had at a concert. I had so much fun at this concert. I walked into The Birchmere not feeling particularly well, but I experienced the healing power of music. My thanks go out to The Birchmere, to Buddy Guy, to Tom Hambridge, and to the rest of the band!