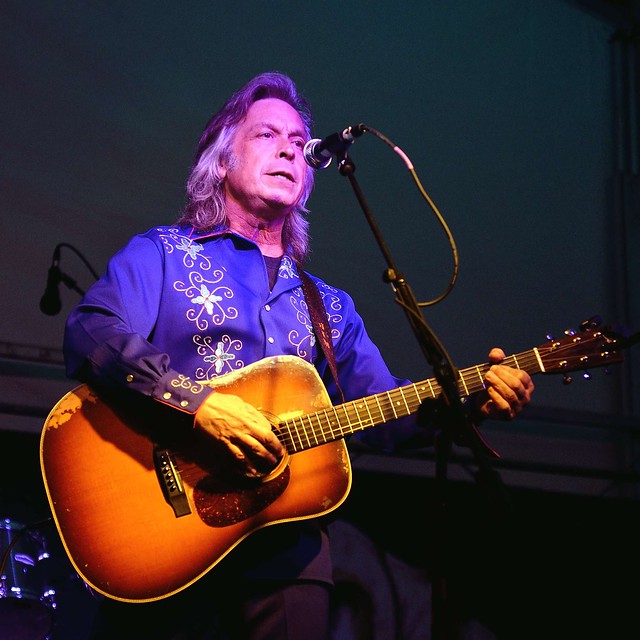 Music is a source of strength and comfort for me. The music that I love melts away my stress, and the messages it contains help me maintain a positive attitude about life and the world. The tragic domestic terrorism of the last week has affected me deeply, challenging my ability to do that. Not only am I Jewish, but I have close family who live in Pittsburgh, and knew victims from the Tree of Life.

Jim Lauderdale’s solo acoustic show in the Wine Garden at City Winery was balm for my troubled soul.

Jim’s concert was a life-affirming, faith-affirming show that reminded me why I love Americana music. This show had the warm intimacy of a living room gathering. Jim had family there, and he’d sung at the wedding of a couple in attendance. I happily recognized one gentleman I have now seen and spoken with at many shows.

I arrived at the venue shortly before the opener was scheduled to take the stage, and Jim was standing right by the entrance. I am delighted to say that Jim’s sterling reputation is well-earned, as he could not have been more of a gentleman. If you ever have the chance to see Jim, take a moment and speak to him. You’ll be glad you did.

I asked Jim to let me snap a shot of his setlist before he gave out it. He replied, “You’d have to get a picture of my mind.” He explained that he prefers to work without a setlist when he’s playing solo, but that it is, of course, necessary when playing with a band.

Playing solo acoustic reveals a musician’s true level of skill as a singer and a guitar player. Jim hit the stage hot, and from the first note, he sounded fantastic. This setup brought up his vocals in the mix, and really drew attention to the power and beauty of his voice. Jim’s virtuosic guitar playing sounded vibrant, soulful, and full of character.

After opening with a couple of older songs, Jim came to his new album, Time Flies, released in August. He played the title song, and graciously credited his co-writer, Mando Saenz. Jim spoke teased that the imagery in “Slow as Molasses,” a song written in the style of early country — “1927 Jimmy Rodgers,” he said — might just start popping up all over country music. He wrote “Violet,” he told the audience, because he’d never written a song about the color. Even as the song paints a gorgeous image of the sky, “it can also be about woman.” Jim really did a great job of highlighting the new album without crowding out his extensive body of work.

Jim made this show very intimate and very special by taking requests from the audience. “King of Broken Hearts” is a tribute to one of his idols, George Jones. Jim, ever the kidder, got the audience going, telling us a tale of how it gets him so depressed he can’t function for 48 hours… but he’d sing it one more time, just for us.

Many years ago, Jim sang “Whisper” for the wedding couple in attendance. He sang them for it, as they danced, and as the audience looked on at the tender moment.

The clinching moment of the night came when Jim brought up his work with bluegrass great Ralph Stanley. Jim sang an absolutely divine a capella gospel song he’d written for the late master. The audience sat, absolutely silent, as Jim sang a prayer that he might be more Christlike in kindness and healing hurt in the world. To say that I was deeply moved was an understatement.

In addition to Jim’s featured performance, Nashville songwriter Amelia White joined him as opener. Though her name may not be as familiar, she has written with (and played us a song she wrote with) Lori McKenna. For a few of us in the audience familiar with their work, it was almost like a puzzle box, seeing how their unique and contrasting personalities contributed to make a really great song. Amelia is performing at a house show in Rockville on Dec. 1. I strongly recommending catching her if you get a chance. For more information, go to her webpage.