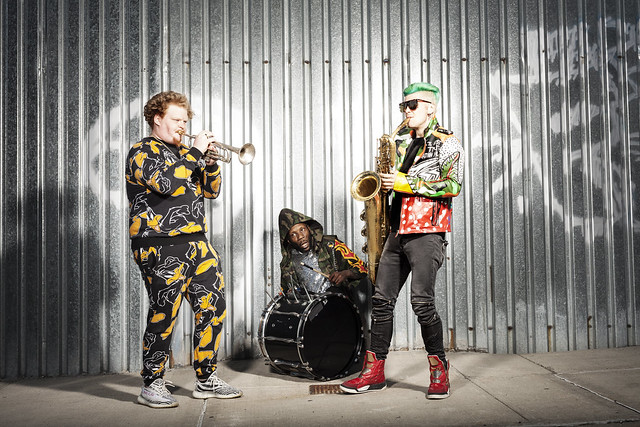 New York City brass band Too Many Zooz call themselves a brasshouse group. That is to say, they make brass music that is also house music. Curious? You can hear them for yourself when they perform at 9:30 Club on Saturday, Dec. 22 with Big Something.

The musical style was “branded” by drummer King of Sludge (born David Parks), who recognized that there was no worthy existing classification for the New York trio, whose other two members are the equally unclassifiable Leo P (saxophone) and Matt Doe (trumpet).

“Brasshouse is a high energy musical conversation,” Matt said. “Though I honestly don’t think there is a good way to describe it in words. It’s about many different feelings and sounds and emotions.”

King of Sludge himself said, “I don’t really care about what’s happening in music — I just make art that I enjoy making.”

Watch the official music video for “Warriors” by Too Many Zooz on YouTube:

“Warriors” appears on Subway Gawdz, the debut full-length album from Too Many Zooz, released in 2016. The song has been making the rounds lately with appearances in a Google commercial for the Pixel 2 smartphone in 2017 and in the Flag Parade of the Eurovision Song Contest 2018 Grand Final.

The gents released F Note, their first EP, in 2014 and followed it up with their second and third EPs, Fanimals and Brasshouse Vol. 1: Survival of the Flyest, in 2014. They released another EP, The Internet, in 2015, and eventually gained the attention of Beyonce, who asked them to perform with her at the Billboard Music Awards in 2016.

Too Many Zoos now bring their mix of dub, soul, funk, and ska to 9:30 Club, and live performance remains the band’s top priority.

“I don’t think there’s any recording that can do a live performance justice,” Matt said. “You’ll see people of all different colors, creeds, genders, ages, sexuality at our shows. I really can’t find a constant between them… besides liking our music — haha.”