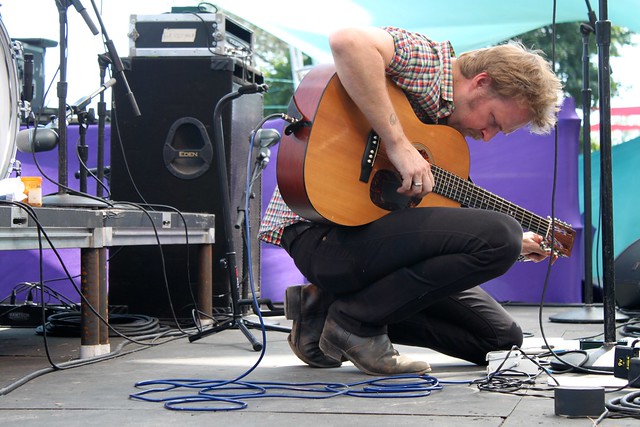 “Who knows, maybe James Mattis is here tonight. He’s looking for something to do,” said MC Taylor, frontman and founder of Hiss Golden Messenger, referring to the Secretary of Defense’s resignation earlier that day. at 9:30 Club recently, MC fit a friend’s description as “an introvert” and “kind of engaging,” contrasting with guitarist Phil Cook, “the most extroverted human being I’ve ever met, and it’s not even close.”

But then leaving the stage after their encore, Phil looked right up at us on the balcony, making eye contact.

MC told the audience that on Bad Debt, HGM’s second album, “I found some kind of language that wasn’t brand new. But it worked for me, and I could sing those things.” MC recorded Bad Debt on a tape recorder in his home, and he said that his favorite moment from the album is a half-second at the end of a song when you can hear his wife, Abbie, talking to his then nine-month old baby, Elijah.

MC’s psychedelic folk language is heavily influenced by musicians like Van Morrison, whose “Into the Mystic” was played by Hiss Golden Messenger during their encore. Despite MC’s West Coast roots (he grew up in Irvine, California), HGM’s songs are shot through with Southern sounds and flavors. Even their song titles reflect this. They opened their set with “Biloxi,” later playing “Gulfport, You’re on My Mind.” HGM also played what MC called “our own personal Southern anthem,” “Southern Grammar.”

Hiss Golden Messenger defies easy genre classification, and psychedelic folk only captures some of their oeuvre. HGM belongs to the broad family of Americana; they play country-rock that draws on alternative-rock. In addition to country, folk, and rock, their music has elements of rhythm and blues, bluegrass, jazz, funk, swamp pop, gospel, and blues.

Certain words and images are common in MC Taylor’s discovered language. Early in the evening, on “Jenny of the Roses,” he sang “I’m not afraid of the darkness / It’s just a different kind of light.” A song later in the set bore the title “Lost in the Darkness,” and the refrain of “Harder Rain” contains the lines “Harder rain / Darker darkness.”

Elijah, now nine, has a five-year-old sister, Ione, the inspiration for the heartfelt “Happy Birthday Song.” MC wrote the song as a gift for Ione, who was jealous that her dad was traveling the world and, she thought, singing songs that were all about her older brother. MC reported that Ione was not especially impressed with her father’s gift.

Hiss Golden Messenger recently released a box set of their early albums. Stream a playlist of Devotion: Songs About Rivers and Spirits and Children on Spotify:

MC told us that Hiss Golden Messenger has a new album coming out in September. Someone asked what the record is called, and MC said he doesn’t know yet. HGM treated the audience to one of the songs on the new album.

“We’re playing the hard songs tonight,” MC said. “I’d like to learn to play ‘Barracuda.’ That’d be a wild exercise, to work that out right now.” Later, as the audience headed for the exits, “Barracuda” played.

The 9:30 Club had a relaxed, intimate atmosphere during the show. Unusual for the venue, MC interacted with audience, responding to specific comments and questions, as he did when asked about the title of the new album. As audience members professed love for various band members early in the show, Mike quipped, “We haven’t gotten to the compliments portion of the evening yet.”

Deeply passionate, but deeply respectful, the audience was abundant in praise and fully attentive to the music. HGM played a meaty, two-hour set for them, and they went home completely satisfied. Even HGM guitarist Phil Cook departed with a smile in his eyes.