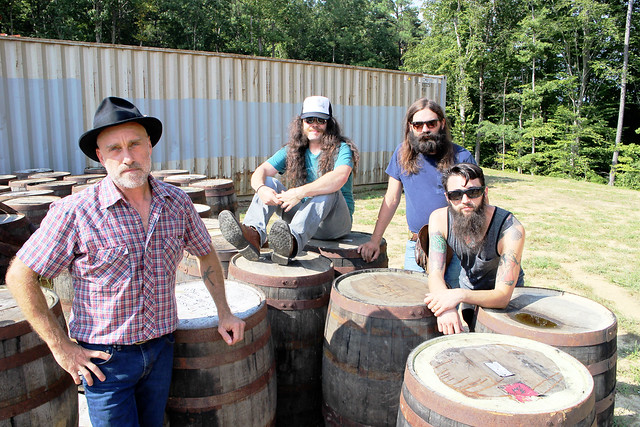 It’s not every day that one sees a man wearing a homemade percussion instrument built mostly out of tin cans and a hubcap. But string band the Hackensaw Boys feature just such an instrument, the Charismo, originally created by founding member Fred Neuhardt, who has since left the band. The heavily bearded Beau Dodson, current percussionist for the Hackensaw Boys, used brushes to play the instrument in a lively show at Gypsy Sally’s recently.

The Hackensaw Boys was started by four musicians in Charlottesville in 1999, and guitarist and vocalist David Sickmen is the only founding member currently with the band, after taking a sabbatical from 2005 to 2012. Notably, the Hackensaw Boys only released one album, 2007’s Look Out, and a pair of EPs, The Old Sound of Music, volumes 1 and 2, during those years. From that period, the band performed “Radio” at Gypsy Sally’s on Dec. 29.

David explained that the Hackensaw Boys have had “about 30 members” since he started the band 20 years ago, when he “didn’t have a gray beard.” In addition to David and Beau, Caleb Powers plays fiddle and Chris Stevens plays bass. David led songwriting duties on the band’s latest release, the 2016 album named for their homemade instrument. The band played songs from that new album, including “Flora,” “Ol’ Nick,” “Wolves Howling,” “Don’t Bet Against Me,” “Content Not Seeking Thrills (Ain’t You),” and “Limousin Lady.”

Stream Charismo by the Hackensaw Boys on Spotify: 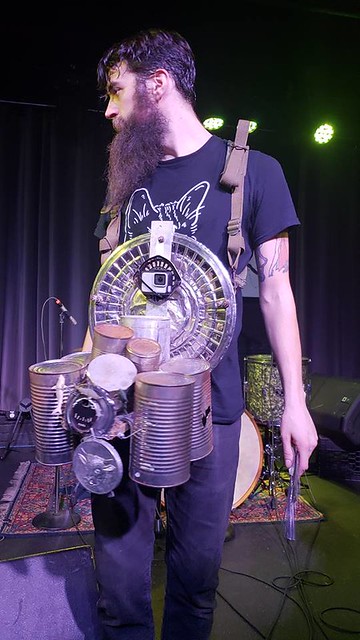 As an old-time string band with plenty of 21st Century attitude, the Hackensaw Boys featured traditional songs. In fact, they made a whole record of them, 2002’s Give It Back. On Saturday night, they played “Factory Blues,” which some readers might recognize from Lucinda Williams’s 2017 remake album, This Sweet Old World.

The Hackensaw Boys closed their set with “We Are Many,” from Love What You Do, the band’s fourth full-length record. David said, “I wrote this when I thought that there could never be a worse president than George W. Bush. I suffered through that, those wars and shit, and now we get this guy. But think the end is near. There’s just too much shit.”

After they finished their main set, the Hackensaw Boys unplugged their instruments from the mics and called for the audience to gather close to the stage. For their encore, the band played with no amplification. For many in the audience, it was the first time hearing a band, even an acoustic band, play without amplification. The crowd, rowdy for most of the evening, got very quiet and attentive for this special display, showing respect for the talents of the musicians.

Editor’s Note: The original version of this article misidentified the bandmembers other than David Sickmen. It has been updated. We apologize for the error!