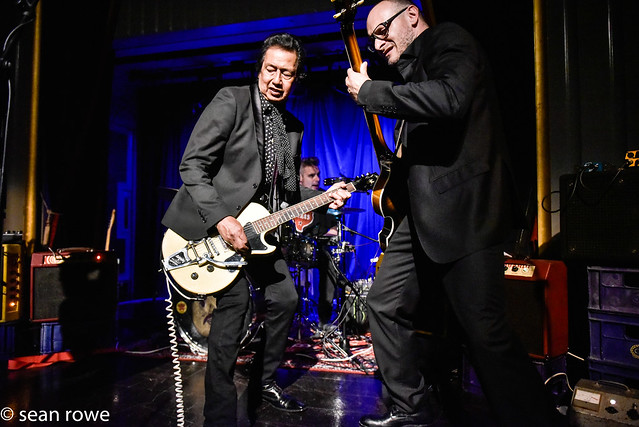 Alt-country rock legend Alejandro Escovedo, named Performer of the Decade at the end of the 1990s by roots music bible No Depression, made his second appearance at City Winery DC on Tuesday, sharing a personal tale of perseverance and the search for a better life.

City Winery DC, which opened last April, hosted Alejandro and his friend and fellow Americana icon and Texan Joe Ely on Aug. 21. (Read our Parklife DC recap.) Alejandro’s show this time around differed considerably from his visit in August. On that night, the two artists took the stage with just their acoustic guitars, sharing spontaneous songs and stories. This time, Alejandro brought a full band, the Italian group Don Antonio. He told the audience that, while he was touring Europe a few years ago, he had a choice of three bands, two English and one Italian. The Italian band, Don Antonio, appealed to him because they’re true to their roots.

In the popular imagination, European music and classical music are often synonymous. It’s a monolithic view that doesn’t recognize the diversity of European music, and it doesn’t recognize that European folk and popular music is quite different from classical music. If you were to imagine a very rough point of beginning comparison for Don Antonio, think of the distinctively Italian sounds of Sergio Leone’s spaghetti westerns, with a little more jazz, a little more rock, and more horns.

Last year, Alejandro released the concept album The Crossing, co-written with Antonio Gramentiere, the guitarist of Don Antonio. After playing “Texas Is Mother,” Alejandro said, “This is a tour that brings together a songwriter from Texas and a band from Italy to tell the story of two young boys… about an America they believe exists.”

The story for the album began to take shape while he was in Southern Italy, which has many African immigrants: Diego, from northern Mexico, and Salvo, from southern Italy, bond over their shared love of punk rock, beat poetry, and the ’70s films of Antonioni and Peckinpah while working in Diego’s uncle’s restaurant. They set off in search of an America “they believe exists,” but the America they discover is very different.

Stream The Crossing by Alejandro Escovedo on Spotify:

The Crossing hit the very topical hot button of the immigration issue. With haunting lyrics like “These men who hunt us know nothing of our lives” in the song “Footsteps in the Shadows,” Alejandro certainly captured the anguish and terror experienced by some immigrants. Alejandro, however, resisted a simple classification of The Crossing as a political album. Rather, he tried to tell “a timeless story” about “seeking better things.” Alejandro has an exceptional ability to abstract from a contentious issue like immigration and see the themes and narratives at work.

Alejandro’s ability to seamlessly weave personal detail into his grand tapestry of themes makes him an exceptional songwriter. Take “Texas Is Mother,” in which he described as “A song that takes them [Diego and Salvo] through Texas, where they meet some unsavory characters.” They also meet a “cowboy named Joe,” who is clearly a pastiche of Joe Ely. Alejandro also used his own personal history to fill out the backstory of his characters, give them depth and verisimilitude.

Alejandro said, “People ask me if it’s a political album.” Referring to the president, he said, “We tried not to include him, but we did. He bullied his way in.” President Trump inspired a song titled “Fire and Fury.”

With all this substantial food for thought, it bears mention that Alejandro looked strong and energetic, bouncing up and down on “Castanets.” Alejandro and Don Antonio tore it up, playing Americana meets punk rock. The hard-rocking climax of the show came with “MC Overload,” after which Alejandro took it down a notch, crooning on “Flying.”

Tuesday night’s crowd gave Alejandro a great reception, with a standing ovation and a demand for an encore. He answered with the Only Ones’ “Another Girl, Another Planet” and his own “Sally Was a Cop,” sending the crowd home happy after a night of big sound and big ideas.