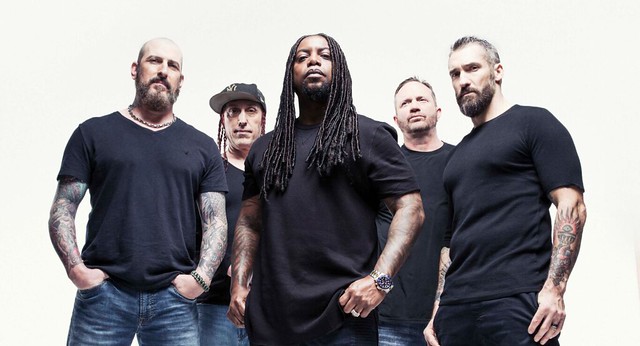 Rockers Sevendust released All I See Is War, the band’s 12th studio album, last year via Rise Records. The gents are touring in support of it, and they stop at Rams Head Live in Baltimore on Sunday, Feb. 10.

“We’re as polarized as we’ve ever been,” John said. “Discussion is not happening. Everyone is so quick to snap online. We’re not listening. We’re just talking. In these songs, we don’t sugarcoat what’s going on. For as dark as the subject matter may be, it’s about hope. We know we can be in a better spot, because we’ve seen so many different individuals come together around music.”

“We take pride in the connection we have,” Clint added. “We’ve always been a people’s band. We’re typical guys who just happen to make a career on stage. With this relationship to the fans, we realize how much we need each other, so we push ourselves to deliver. We don’t stop. We keep moving.”

Watch the official music video for “Risen” by Sevendust on YouTube:

In a review of All I See Is War for Cryptic Rock, Patricia Jones applauded Sevendusts’ flexibility.

“The band made their bones on being malleable and almost unpinnable. While many bands easily fit into a single niche, Sevendust has long defied singular definition. Are they Metal? Are they Hard Rock? Are they actually considered Nu-Metal or Alternative? Whatever you call them, don’t call them lazy. Like a fine wine, Sevendust seems to just be getting better with age, and All I See Is War is their latest gift to the world. So, for unyielding commitment to their craft, passionate songwriting, and emotional impact, CrypticRock give Sevendust’s All I See Is War 5 out of 5 stars,” Patricia wrote.