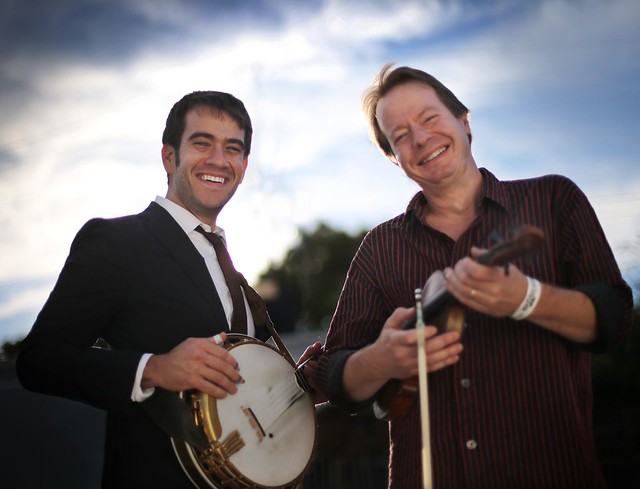 Noam Pikelny, co-founder of Punch Brothers, and Stuart Duncan, bluegrass multi-instrumentalist, tour together again, and they will perform at City Winery in DC on Tuesday, Feb. 19.

Noam has emerged as a preeminent banjoist of his generation. A three-time Grammy nominee, he was awarded the first annual Steve Martin Prize for Excellence in Banjo and Bluegrass in 2010.

Universal Favorite is the fourth record Noam Pikelny has released under his own name, but it’s truly his solo debut. His previous solo efforts — including 2014’s landmark Noam Pikelny Plays Kenny Baker Plays Bill Monroe — were full-band affairs that revealed his abilities as a dynamic bandleader while reinforcing his reputation as an inventive accompanist.

The new release features only Noam, playing lovely originals and covers that showcase his compositional flair. And Noam sings for the first time!

Meanwhile, Stuart, the consummate sideman, has lent his particular taste and tone to countless artists and projects. Whether trading dizzying instrumental licks with the likes of Bela Fleck and Jerry Douglas, or adding complimentary fills for vocalists Alan Jackson and Barbara Streisand, Stuart has found a professional “home” both in the studio and on tour.

The most recent evidence of Stuart’s cross-genre expansion is “The Goat Rodeo Sessions,” his collaboration with Chris Thile, Edgar Meyer, and Yo Yo Ma.

Said Elvis Costello of Stuart, “When I first played with Stuart, I was struck as anyone would be, by the beauty of his tone and his judgment about when to sometimes seek the essential middle distance in the ensemble with a well-chosen connecting line or timbre. In time, at speed and in the heat of the spotlight, playing with The Sugarcanes, I was constantly startled by his access to the fire and fine danger of the music in hand, often delivering the most remarkable contributions off the back of some utterly self-depreciating quip.”

Elvis added, “He will sometimes arrive at the studio with a bag of splinters and wires from which he is going to reassemble some rare, lost stringed instrument, which speaks of his curiosity and care for both the art and the craft of music. He is one of the finest musicians I have ever had the good fortune to sing alongside.”

This event is part of the Smithsonian Year of Music.