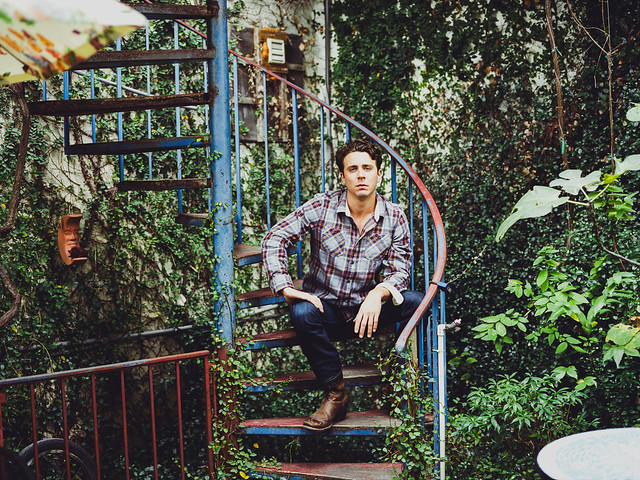 After many years living in Austin, Greenbelt native Joe Pug has returned to “gorgeous Prince George’s.” Now married and a father, the veteran troubadour came back home to rejuvenate himself after experiencing burnout. Appearing solo at The Hamilton recently, he appeared refreshed and vigorous.

In 2009, Joe spent a month touring as the opening act for the legendary Steve Earle. Joe observed Earle carefully, learning from the master performer. While Joe has his own style, it’s not hard to see Earle’s influence. Joe’s biting, honest commentary echoes Steve’s no-bullshit attitude, and both drop into blue language. But it’s not just verbal similarities that Joe picked up from Steve — the influence seeped into more nuanced aspects of his performance, like movement and instrumentation. At a typical solo acoustic show, an artist sits and plays one guitar. Like Steve, Joe mixes his set between standing and sitting, and he uses multiple guitars to achieve the best sound.

Joe opened his set with “Burn and Shine,” which references the “Frederick county line.” A long harmonica intro set up “Hymn #35,” a beautiful exploration of the self. “Not So Sure” rolled out like a short story of loss, and its religious imagery carried over into “How Good Are You,” which explored family.

During “I Do My Father’s Drugs,” Joe stepped away the microphone, strumming at his guitar and letting his voice carry naturally to the audience in the Hamilton. After the song, he said that he’d been holed up, writing songs for a new album. He told that audience that he’d found an entire drawer full of short songs that appeared to have been set aside for future use. When Joe took a good look at that these songs, he found that they were perfect: he couldn’t add or subtract anything from them. That doesn’t mean, he explained, that they’re good songs. He shared one of these haiku-like songs, then changed guitars and sat down on the stool on the stage.

Joe played a series of three songs. “One of Many” tackled poverty in a land of plenty. The second was a Willie Nelson song, and the third was “Call It What You Will.” Joe then proceeded to explain to the audience how to tell when an artist or band is going to hit you with new stuff in their act. He said there are three signs. First, they’ve just played a signature song and they’re riding high on that capital. Second, they’ll say “We’re headed into the studio next month.” Third, they’ll say “kind of a new direction for us,” which means “it either sounds exactly the same, or they’re straight up Christian.”

After telling the audience all the signs of how to spot an artist presenting new material, Joe — you guessed it — shared a new song, one that he’s pretty sure won’t make the album. He described it as meant “to help my wife understand the nature of my domestic reality.” In a rather hilarious turn, Joe played “I Don’t Work in a Bank,” describing in vivid detail the financial sacrifices required of the spouse of a musician.

After the new song, Joe played “Nation of Heat,” the title cut of his 2008 debut EP. After “Hymn #101,” he said, “The show isn’t quite over, but that was the climax.” Moving to the piano, Joe quipped, “I’m just going to close things out with 75 minutes of Billy Joel songs.” Rather than a Billy Joel song, he played his own “Veteran Fighter.”

Joe played “The Great Despiser” and made the obligatory plug of his goods. He remarked, “My manager assures me people love tote bags, but in my anecdotal experience, people fucking hate tote bags.” A man shouted out, “I’ll buy a tote!” “Thanks Uncle John!”

For the last song of his set, Joe took another local turn. He once heard Ryan Adams’s “Oh, Carolina,” and he thought he could do the same thing, so he wrote “Oh, Chesapeake.” For his encore, Joe played a song by Ryan Culwell, “Won’t Come Home,” and one of his more popular numbers, “Deep Dark Wells.”

Now that Joe is local once more, keep your eyes and ears peeled for his impressive talent, sure to perform again soon.