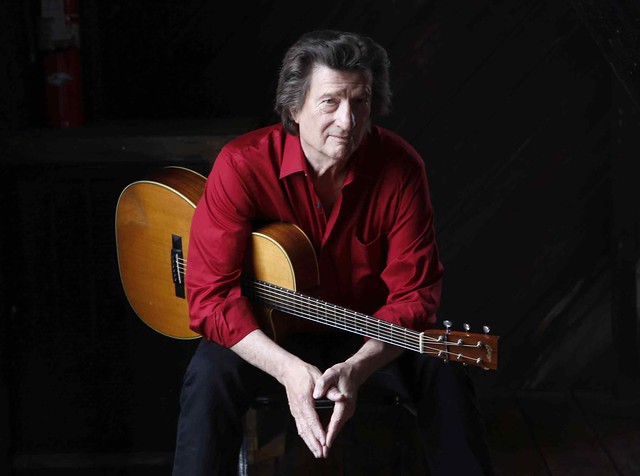 It’s amazing what one man, with one acoustic guitar, sitting in a chair onstage, can do. What his facial expressions and gestures can add to his songs. How he can intoxicate you with just a glass of the dry wine of his wit. Seasoned musician Chris Smither injects so much life and so much humor into his live performance, yet with such understated taste. He did so much at The Hamilton Live recently.

Raised in New Orleans the son of a Tulane languages professor, Chris fell in love with the music of Lightnin’ Hopkins and Mississippi John Hurt and “desperately wanted to be” an acoustic country blues player. As he told the audience before “What It Might Been,” a black singer-songwriter named Vance Gilbert used say there was a black man inside of him trying to get out. Chris said that he joined 23andMe a few years ago, and it turned out that Vance was right.

Chris released a new album, Call Me Lucky, last year, but he served up a hearty New Orleans gumbo with his setlist, a mixture of his material over the last 35 years. After he took the stage, he asked, “How you like my pal Zak?” referring to his opener, Zak Trojano. The audience replied with applause and Chris joked, “I thought it was a mistake to let him open for me. Now I gotta really work.” Getting down to business, he played “Open Up,” followed by “Make Room for Me.”

Stream Call Me Lucky by Chris Smither on Spotify:

Introducing “Don’t Call Me Stranger,” Chris said, “One of these days, I’m going to make a whole record called ‘Songs My Mother Would Have Hated.’ This is the first track.” He finished and told the audience, “My mother preferred love songs. I used to tell her that was a love song.” Chris played the title cut of his 2009 album Time Stands Still, then introduced the next song, “Nobody Home,” as “Just about a guy looking for help.” Commenting on the times, he added, “Very hard to find these days.”

Chris told the audience that he gets tangled up in songwriting every time he decides he’d “better produce something before everyone decides I’m dead.” He enters his writing his writing room in three-hour blocks. One day, his alarm went off to let him know that it was time to phone in to a radio station for an interview. The interviewer asked him about him about his process for songwriting, which he said is illogical, almost mystical. He tried to capture that in “Down to the Sound.”

After the title track of his 2003 album Train Home, Chris played a song that he said he would’ve called a classic, “if I hadn’t written it myself,” “What It Might Have Been.” He then spoke of “sturdy songs.” “A sturdy song,” Chris said, “is a song than can take a lot of abuse. Bob Dylan is a sturdy songwriter. He abuses his own songs. You never know what you’re gonna hear.” He segued into a story of how he and his producer, experimenting in the studio, decided to try Chuck Berry’s “Maybelline” in a minor chord; the chord change and acoustic guitar made the song sound completely different.

Between “Get a Better One” and “Time Stands,” Chris told the audience that he and his wife have two dogs and a cat. The dogs, he said, think the cat is the best toy they’ve ever had, and the cat is having none of it. Then he told a joke: Two dogs and a cat are at the gates of heaven. St. Peter tells them to state their case for getting into heaven. The first dog says, “I was a good boy and I saved two children from drowning.” St. Peter lets the dogs in. The second dog says, “I was a good boy. I didn’t save anyone from drowning, but I didn’t bite anybody, either. “Alright,” St. Peter says, “Go in.” Turning to the cat he says, “What’s your story?” “I think you’re in my chair.”

Chris played three tracks from Call Me: the opening number, “The Blame’s On Me,” “Change Your Mind,” and the title song. He treated the crowd to a “Lola” of his own composition, no relation to the Kinks song, which he followed with “One Hundred Dollar Valentine.” “No Love Today,” one of his better-known songs, is set in New Orleans, and it is based on the street produce vendor from his youth, who had a memorable high-pitched cry. Chris told the audience that he recently made his way back to his hometown for the jazz and heritage festival, and everyone sang along with the song. This was very special for him; although he’s from New Orleans, he doesn’t make it there often.

Chris brought his set to a close with “Sitting On Top of the World” and “Leave the Light On.” He received a standing ovation and readily assented to doing one more. To send the audience more, he played a furious cover of Blind Willie McTell’s “Statesboro Blues,” rising from his chair and summoning one final, glorious burst of energy. Chris may be pushing 75, but he’s healthy and vibrant.

The audience rewarded Chris’s display of virtuosity and vitality with a second standing ovation and went home thoroughly satisfied.