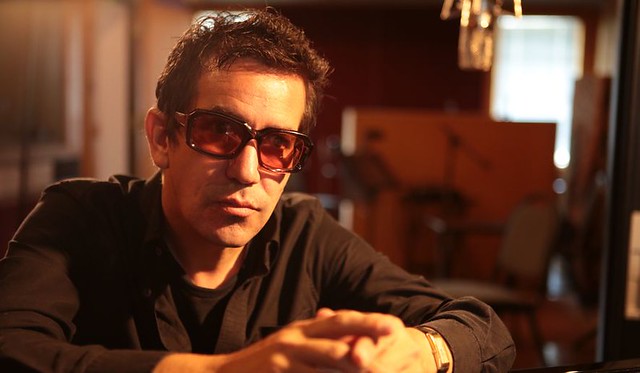 I’ve been watching Westworld. And so it occurred to me as I watched A.J. Croce perform at City Winery recently, this piano man would be at home in the Old West, tickling the ivories at a saloon.

But he also would seem at home in some futuristic, far-out space scene, playing the keys at the cantina in Star Wars. You see, A.J. Croce plays timeless barrelhouse boogie-woogie. Born musical royalty, son of the legendary Jim Croce, A.J. has tapped into something even older and deeper: He belongs to the tradition of bards and troubadours that extends back at least as far as Homer.

In A.J.’s playing, you can hear the Tulsa sound of Leon Russell, the New Orleans hoodoo of Dr. John, translation of the genre-bending guitar mastery of Ry Cooder and David Hidalgo. A.J. may be based in the blues, but he has a panoramic view not just of view of American but of world music. He described one of his songs as “Cuban delta style.” It’s all just a little Dixie-fried, too.

Bass player David Barard accompanied A.J. during his set at City Winery DC on May 28. With his thick body and gray jacket, David carried himself like the veteran R&B player he is. In his more than 40 years in the business, he’s recorded and performed with Dr. John, the Neville Brothers (both individually and together), and Patti LaBelle, among others. With A.J. at the piano bench and David sitting with his electric bass, the evening felt relaxed yet structured.

A.J. opened his set with the last song he co-wrote the late Leon Russell. “The Heart That Makes Me Whole” appeared on A.J.’s most recent album, Just Like Medicine. He followed with another original song, “Coraline,” before playing a cover of Sam Cooke’s “Nothing Can Change This Love.”

Stream Just Like Medicine by A.J. Croce on Spotify:

A.J. told the audience that he wrote “Call of Love” with a Curtis Mayfield vibe in mind, specifically 1971’s The Bitter. Producer Mitchell Froom, however, had a different vision for the song: 10 years earlier, set at the Copacabana. A.J. described Mitchell’s vision as “cinematic.” “Given that it’s just David and I playing,” A.J. said, “you can imagine it anyway like.” Listening carefully to the song, I found that both A.J. and Mitchell were correct in what they heard in it. The song opens dirty and funky, but that gives way to a more pop middle and ending.

Dan Penn wrote and produced many of the great soul hits of the ’60s: “The Dark End of the Street,” “I’m Your Puppet,” “The Letter,” “Cry Like a Baby,” and “Do Right Woman, Do Right Man.” A.J. saw Dan perform at the Nashville City Winery and asked him if he’d be interested in writing together. Dan agreed. They co-wrote two songs, the first of which lent its title to his new album: “Cures Just Like Medicine.”

At the age of 17, A.J. went from San Diego to Nashville for his first recording session. Jerry Lee Lewis walked out of the studio as he arrived, and he was starstruck; things like that didn’t happen in San Diego. He’d been hired by Cowboy Jack Clement, who produced Johnny Cash for some 50 years. A.J. described Clement as an eccentric who’d dress in his “costume of the day.” He might dress up like the Penguin, or he be wearing a kimono and smoking a huge joint. You had to catch him, A.J. said, between his smoking and his drinking.

While he was in Nashville, A.J. paid a visit to the famous, intimate club the Bluebird. The first night he went, they didn’t have a piano, so he came back the next night and played. He wrote about it in “Which Way Steinway.” Originally intended to be a Bob Wills, Western swing-style piece, it turned out to be more a jazzy, Count Basie type of thing. A.J. played this song without accompaniment, except for a single thump to punctuate the end of the song, and he received enthusiastic applause for his vigorous work on the keys.

“The Other Side of Love,” the second song that A.J. co-wrote with Dan Penn, got his “last album rolling.” A.J. talked about recording in mono, not being for the sake of being old-fashioned, but because, with our laptops and cellphones, we are listening on to music on the “equivalent of a transistor radio.” While stereo recording makes a much better listening experience possible, many music fans don’t have the equipment to hear it properly. Without the proper playback equipment to separate the channels, music recorded in stereo can sound inferior to a mono recording.

A.J. stood up from the piano and picked up the acoustic guitar. He went straight blues, playing Sonny Terry and Brownie McGhee’s “Better Day.” A.J. then played a song by the father he never really knew; Jim Croce died in a plane crash when he was only two years old. Jim Croce wrote “Box #10” in 1969. As A.J. explained to the audience, Jim and his mother had just moved from Philadelphia to the Bronx. Jim was playing a lot of gigs and backing a lot of other people up. He felt like it was his last to chance to make it music. A.J. also played Jim’s “These Dreams,” which he called a “pretty song,” and a “fun song to play on guitar.”

“Rollin’ On” was the first song that A.J. co-wrote with Leon Russell. Leon told him to send the music and he’d write the lyrics. A.J. got to record this song with Alan Toussaint, a legendary New Orleans songwriter and producer responsible for hits like “Mother-in-Law” and “Workin’ in a Coal Mine.” A.J. invited the audience to sing the chorus, and David got them clapping to the rhythm.

A.J. smiled and laughed. “Want to play a song by Toussaint?” he asked David. “Yeah,” David answered, and they tore it up with “Brickyard Blues.” They followed with the title cut of A.J.’s second album, “That’s Me in the Bar,” then “Come and Go.” “Easy Money” is about a bunch of con artists trying to get over on each other.

Bluesman Skip James wrote “Look At All The People Standing At The Judging,” but, A.J. said, “I’m not sure you could call it a Skip James song anymore.” A.J. added a Cuban groove to it, leading to the comment I mentioned at the beginning of the review about “Cuban delta style.”

By request, A.J. played “He’s Got A Way With Women” from his eponymous debut album. He needled the audience a bit about making all the requests off of his debut record. After “Time Is Up,” A.J. closed his set with Billy Preston’s “Nothing From Nothing.” The audience gave him a standing ovation, and he came back with David to play Brian Wilson’s “Sail On Sailor.”

After an hour and forty-five minutes of excellent music, A.J. left the stage with a second ovation. The show’s early start time of 7:30 had us out at 9:15, and I was able to Uber to the NoMa station and Metro home to Ballston by 10, which is much appreciated on a Tuesday evening. (Pro tip if you don’t drive: it’s under $5 to use the Uber pool to get City Winery from NoMa, and it’s not an especially walkable 1.3 miles.)