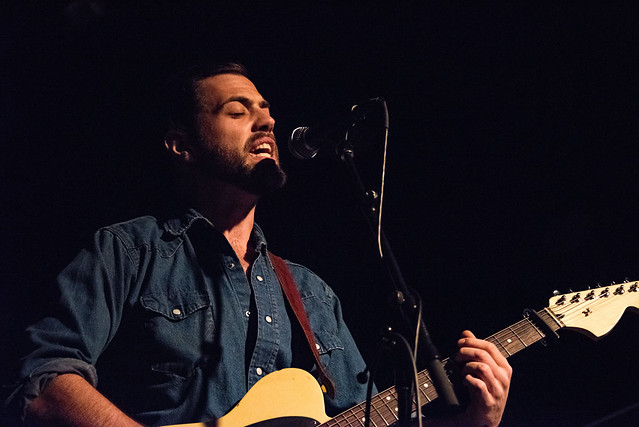 Jonny Grave, the man and his music, defy categorization. Yes, he learned his chops studying blues greats like Son House, Blind Willie Johnson, and R.L. Burnside, but as I sat down to write this piece, I opened up the advance file of his new EP, IMPALA, and something unexpected and wondrous began pouring from the speakers.

This was much more than just Mississippi Delta Blues; it was music that felt universal: Latin Salsa, French Manouche, American Funk, and yes, Mississippi Blues, too. Jonny explained, “These five instrumentals are from everywhere. I keep my ears open and try to remember what I hear whenever and wherever I travel. Through Beirut, Paris, San Juan, Curitiba, and Clarksdale, I heard the most fabulous music, and smuggled back whatever I could.”

I recently spoke with Grave about the new record and upcoming release show at the Black Cat on June 15 in a wide-ranging interview that covered topics as diverse as the DC music scene, the origins of blues and jazz, and his own musical vision.

But first, a little background. Jonny Grave started out, as do many rebellious young teenagers, by banging on drums, eventually sitting in with a range of punk and metal bands during high school. Around the same time, he picked up a guitar but didn’t take it seriously until his father, a guitarist for an ecumenical folk service at the Washington National Cathedral, hurt his hand and reluctantly gave Jonny a shot at subbing in-an experience that changed his life. Over the next few years, he practiced religiously, learning blues riffs from anyone he could and soon writing his own songs. By 2007, Grave was gigging around the DC area, with his first show in July 2007 at the Quarry House Tavern in his native Silver Spring, Maryland.

Today, after thousands of solo and band shows, extensive travels (both domestic and international), a vast musical repertoire and a handful of CD releases, this guitarist, songwriter, singer, bandleader, teacher, musical historian, writer, photographer, and guitar repair tech is poised for a busy second half of 2019.

We started out our conversation talking about IMPALA. “It is a collection of five instrumental tunes recorded live with a quartet… the songs have no words, they’re live, loud, electric, obnoxious, really fun. It was recorded at Hill Country Barbecue in January 2019 and I’m delighted with how it turned out, as well as with the performance. I worked with some stellar musicians for this set and really grateful that it was able to turn into a release.” The musicians included Scott Schoem, keys; Ben Rikhoff, bass; Marty Risemberg, drums; and Anthony Fowler, engineering, mixing, and remastering.

The first tune, “Una Medalla, por favor,” opens with soft keyboards and guitar flourishes reminiscent of Caravanserai-era Santana, before breaking into a full salsa jazz fusion-like workout. Although Jonny’s guitar in no way mimics Carlos’ style, it nonetheless guides “Medalla” but still leaves plenty of room for the other musicians to shine. “Paris, 1947,” starts out tastefully with warm jazzy riffing that flows into ditty-like progression reminiscent of Django inspired jazz manouche with hints of American ragtime. It’s a lovely piece that’ll leave a smile on your face.

The title track, “Impala,” starts with a killer distorted riff anchored by a funk back beat that sprints across a musical landscape, then slows, pauses and takes off again. “The Gospel Holdover” recalls Allman Brothers with its Hammond organ-like backing and “happy” blues melody. “Golly, What a Dream,” is the sole standard blues piece on IMPALA, starting off with an easy, loping rhythm before about halfway through launching into a double time rocker. Grave gives his guitar a thorough workout before bringing the tune, and EP, to a soft ending-just as it began.

I’d seen Grave perform solo at Jammin’ Java with The 9 Songwriter Series, but IMPALA showcases the full range of his considerable talents as a bandleader, guitarist, and student of music. Not surprisingly, our conversation soon moved on from the EP to a broad range of subjects. 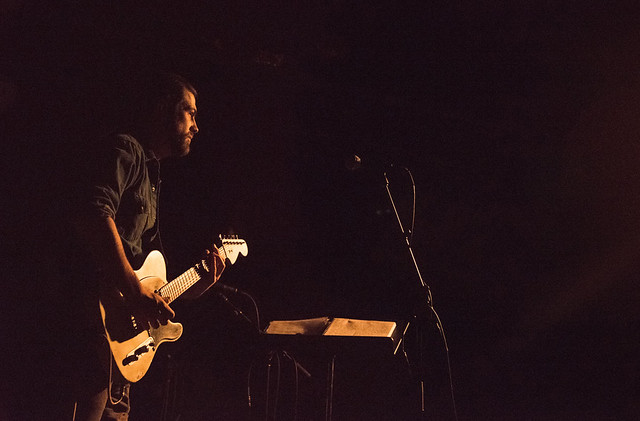 Talking about the DC music scene, Jonny said, “I played about 150, 160 shows last year, some were up and down the East Coast and in Canada, but for the most part here in the area. A good chunk of those gigs were with bands, but I never played two shows back to back with the same bands… this group of guys on the EP I’ve played with quite a bit. In DC, there’s a really vibrant music scene, and a lot of really interesting people making music. Putting impromptu bands together is really fun, really exciting, and gives the audience an opportunity to hear the songs with different players.”

“One of the reasons this town has such a vibrant scene is that there are a dozen more venues now than there were ten years ago when I started playing. It does, however, throw a wrench into the spokes. ‘Well, there’s a thousand different things going on tonight, how do I make my show stand out?’ But what we might notice, though, is that while we might see attendance drop, we will see a rise in the quality of audience-performer interaction at genre specific shows,” Jonny said.

Grave made the point that venues like The Anthem that feature acts as diverse as Gary Clark Jr. and Ariana Grande present a challenge for local musicians trying to break into the local live music scene, simply by the fact that there’s only so many people who will go out to see a show on any given evening; not to mention that there are myriad choices of artists and venues in town every night. But despite that, he said, “I’d much rather be making music today than 50 years ago, especially in DC.”

“The difference between venues on the Wharf and U street is that they operate under a different mindset. Recently at DC9, I saw FINK, one of my favorite songwriters of the past 15, 20 years with a crowd of 75 or 80 people and I got to hang out with him on the rooftop, smoke a cigarette, and buy him a beer. That’s the kind of experience that’s important to performers. I got to poke and prod him a little and people who are in love with music are always going to seek that out. That’s why venues like DC9 and Black Cat will continue to thrive,” Jonny said.

“However, I do think that those venues will have to change over the next few years. The proof of that is in the Black Cat’s renovation. I went to Cryfest (the Cure vs Smiths show) to check out the room before I approached them about my release show. To be honest, I had some smaller rooms in mind but when I saw how the Black Cat had been renovated lovingly and to be honest, improved, I really didn’t want to play anywhere else,” he said.

As our conversation meandered to the rise of blues and jazz in Europe and how it eventually morphed into rock and roll back in the States, the music historian in Jonny came out. “When you think about the end of World War II, a lot of Americans died in major combat. And for half a generation, a lot of young men grew up without Dad, grew up without positive male role models. So they tend to go for rebellion, for standing out, for being a rebel. This is how the seeds for rock and roll grew. But we’re talking about a genre of music that at its oldest is, like, 75 years old!”

The music industry is one that continues to change at a dizzying clip. Our conversation touched on new technologies that are driving the industry’s changing business model. “This has happened so quickly and it continues to change, literally every single day since I started playing music professionally. One of the good things about being a musician in the 21st Century is that you can do everything yourself, but the downside is you have to…do…everything…yourself. I went to a music convention a couple years ago and they could have summed everything up in one word: more,” Jonny said.

What he meant, of course, is that musicians need to keep putting more and more material out there in the hope that something will break out, go viral.

We eventually started talking about his plans for the rest of the year, “I’ve got eight things that could become songs, they’re really interesting, and could end up on a record. I’ll be home all summer, playing locally. I’m hitting the road with a trio in October, playing the Carolinas, Alabama, and Mississippi up to Nashville and Knoxville then through Virginia. Then in November heading north into New England,” Jonny said.

Soon the topic turned to travel and wanderlust: the West, its big sky, and the California mountains. “I’m hoping to get out to the desert sometime, but it may have to wait until the top of next year. I’m really a desert fanatic. I like the wide vast expanses of nothingness, the emptiness,” he said. Something tells me, though, that emptiness may produce a few new songs.

A few days after our interview, I caught Jonny on a Thursday evening during his solo set at William Jeffrey’s Tavern in Arlington; a relaxed, low-key gig providing ambient music for people who were there to have a beer or two, chat with friends, or simply unwind quietly. Definitely a far cry from what the Black Cat show promises. “I play for the room, and that includes the bartenders, servers, and host. So I vary the material and how I sequence the set.” 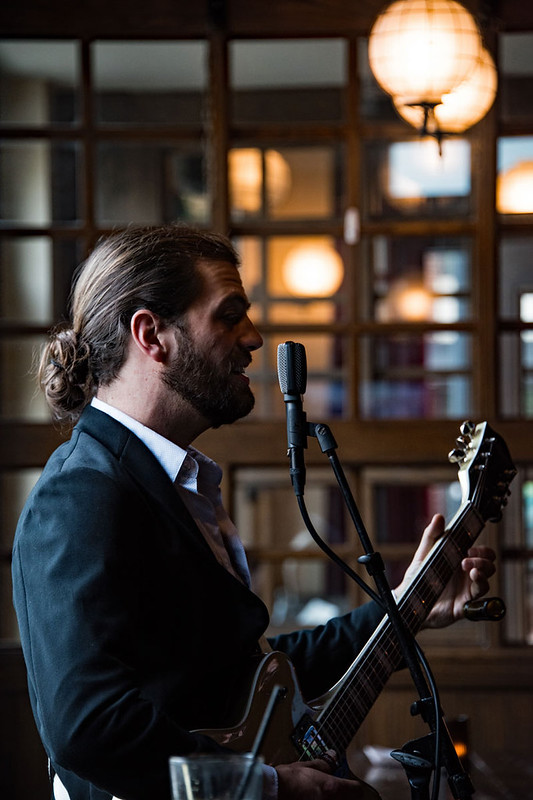 Grave’s vast repertoire gives him the ability to read, and respond to, an audience’s mood, whether it’s hanging on every note of a fiery solo or the hushed coolness of the audience in a tranquil neighborhood tavern. Such instincts have served the best musicians for decades, if not centuries. Clearly, Jonny Grave’s instincts have served him well, too.

Jonny Grave will be playing throughout the DC metro area for the next several months, and his headlining EP release show (along with Mary Jo Mattea and Pleasure Train) at the Black Cat on June 15 promises to be a major event. Find tickets and more on Jonny’s website. And look for IMPALA on June 14 in all the usual online places.

Here are some pictures of Jonny Grave performing for The 9 Songwriter Series at Jammin’ Java on April 10, 2019, and William Jeffrey’s Tavern on June 6, 2019. All photos copyright and courtesy of Mark Caicedo. 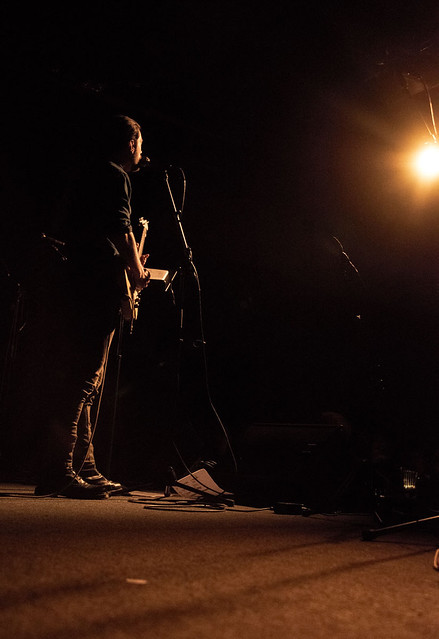 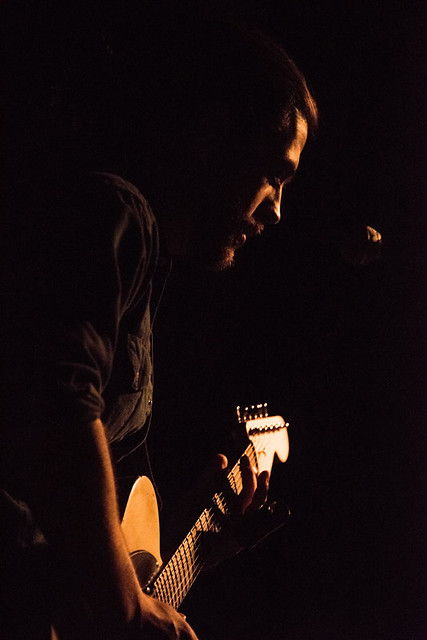 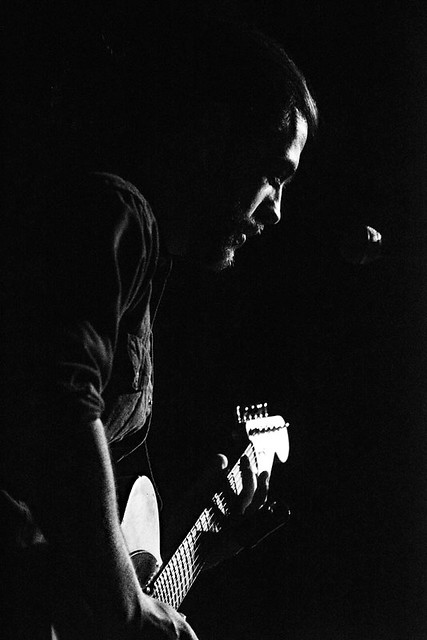 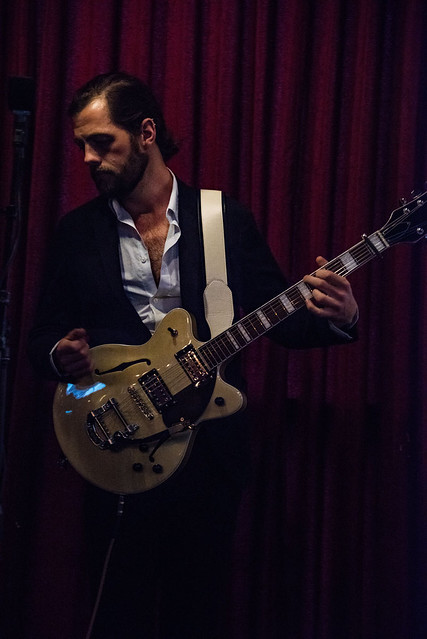 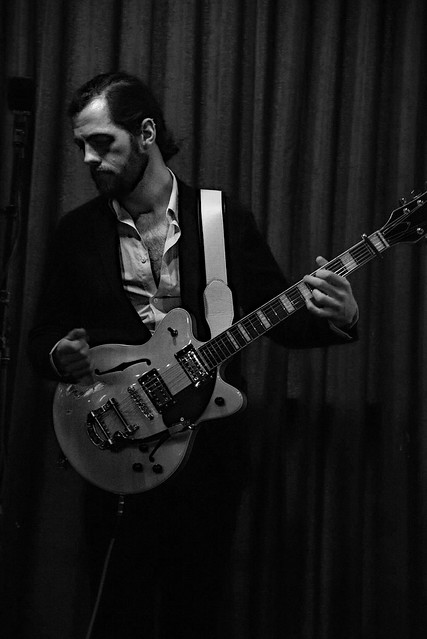 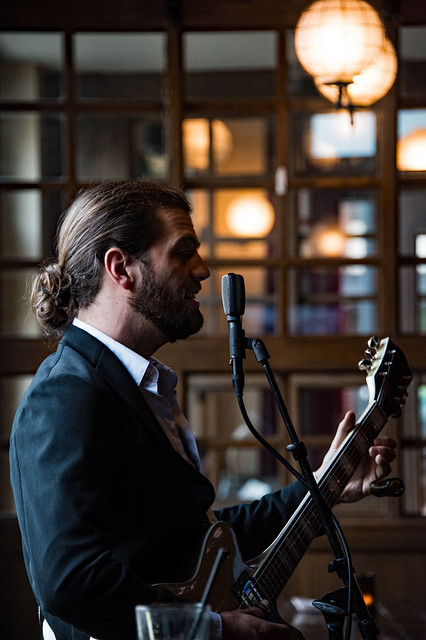 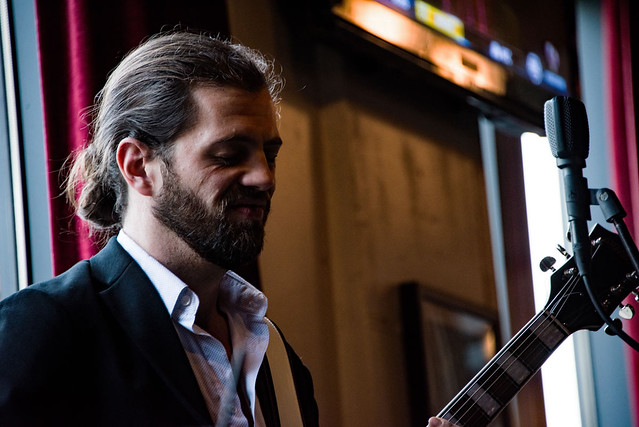 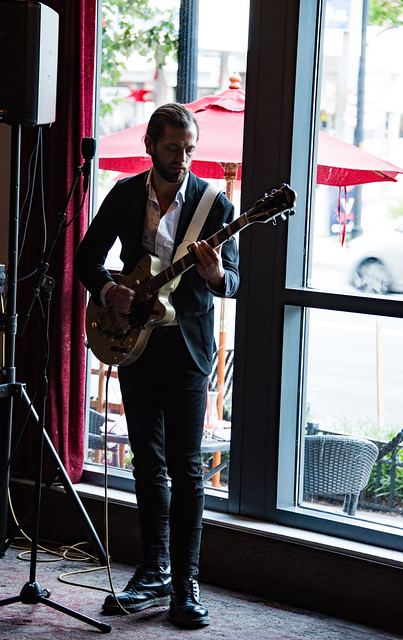 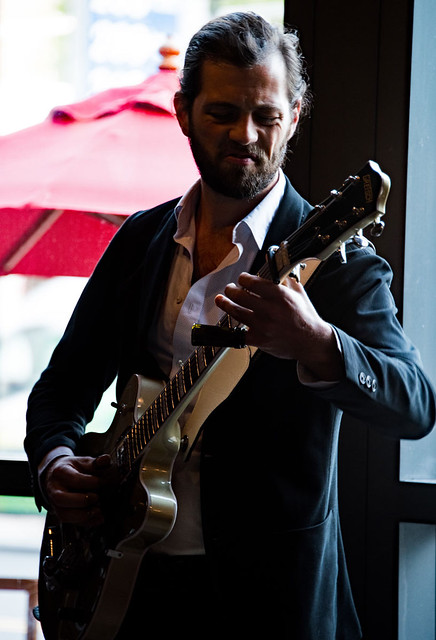 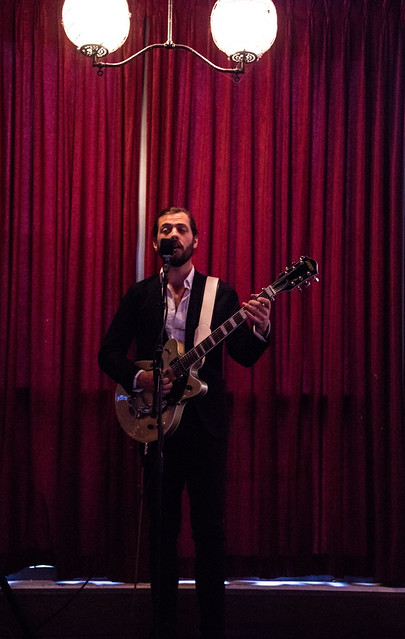 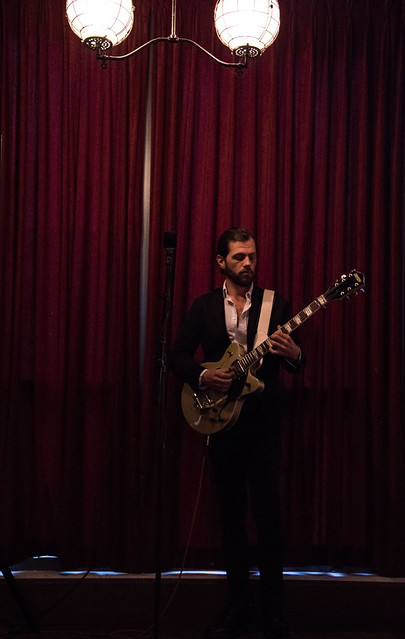 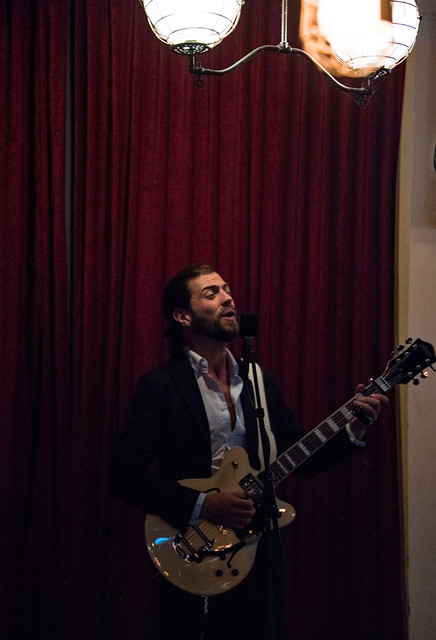