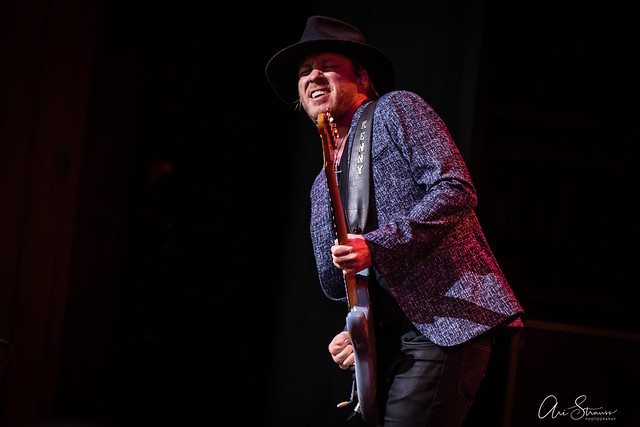 Bluesman Kenny Wayne Shepherd emerged from Wolf Trap recently every bit the Southern guitar hero. The fan sitting next to me saw Kenny several years ago at the much smaller Ram’s Head in Annapolis. He said that Kenny Wayne really brought his performance up to the scale of the stage. He absolutely shredded.

A former teenage prodigy — Kenny Wayne was signed to major label at the age of 13 — channeled his idol, Stevie Ray Vaughan, into long, brilliant solos. The fan next to me pointed out that while the closing number in his encore was “Voodoo Child,” it was “Stevie’s version. No one tries to do Jimmy’s [Hendrix] version.”

Under the setting sun, the Kenny Wayne Shepherd Band opened it set with “Woman Like You.” Vocalist Noah Hunt got the audience clapping along. The band followed with “Mr. Soul,” which led into “I Want You.”

Kenny Wayne sang “I Want You,” and Noah just played rhythm guitar. Midsong, the trumpeter broke he into a solo. He bent back and blared his horn. The trumpeter’s air spent, Kenny Wayne launched into a screaming guitar solo for the remainder of the song. “I Want You” hailed from Kenny Wayne’s new album, The Traveler, released in May via Concord and Provogue/Mascot Label Group.

Stream The Traveler by Kenny Wayne Shepherd on Spotify:

After “I Want You,” Kenny Wayne told the audience that the band wanted to “slow it down a little” with one of his favorites from his 2011 album, “How I Go.” Kenny made one of his frequent guitar changes, then the band played “Diamonds & Gold,” from Lay It on Down.

A cover of Elmore James’s “I Can’t Hold Out” took Wolf Trap to church. Noah got a call and response going, with the audience singing the chorus, “Talk to me baby.” The trumpet player laid down his horn and enthusiastically clapped his hands to the rhythm.

On “Shame, Shame, Shame,” Kenny Wayne played his longest solo yet. His playing was kinetic. It grabbed you, it pulled you along, it gave you that rollercoaster feeling, like you plunged forward, spun around, and flipped upside down with the music, without ever moving. Kenny Wayne expertly built up tension in his playing, and he knew just when to let the audience release their breath. Virtuoso solo requires both masterful creative and technical skills, and Kenny Wayne possesses both in spades. The audience appreciated exactly what they had heard, and rewarded Kenny Wayne with a standing ovation.

The band finished its set with “Turn to Stone” cleared the stage. Another standing ovation and wild cheers brought the band back to the stage for a two-song encore. They played Kenny Wayne’s signature song, “Blue on Black,” and finished with “Voodoo Child.” Kenny Wayne pulled out all the stops on “Voodoo Child,” taking off his hat and playing his guitar behind his head.

This was the real thing, the Mississippi Delta foundations of rock ’n’ roll, played loud and wild, with reckless abandon. It was blue-eyed soul and blasting horns, and a handsome blond guitar slinger who’s as good as they get.

Here are some photos of the Kenny Wayne Shepherd Band performing at Wolf Trap on June 23, 2019. All pictures copyright and courtesy of Ari Strauss. 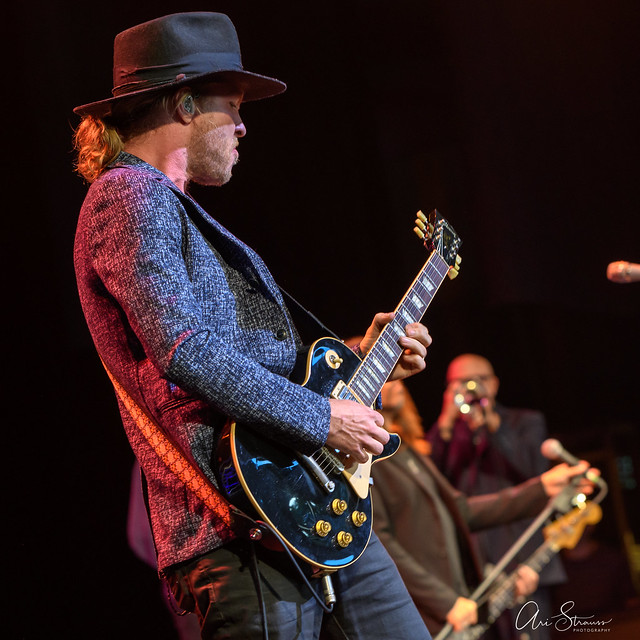 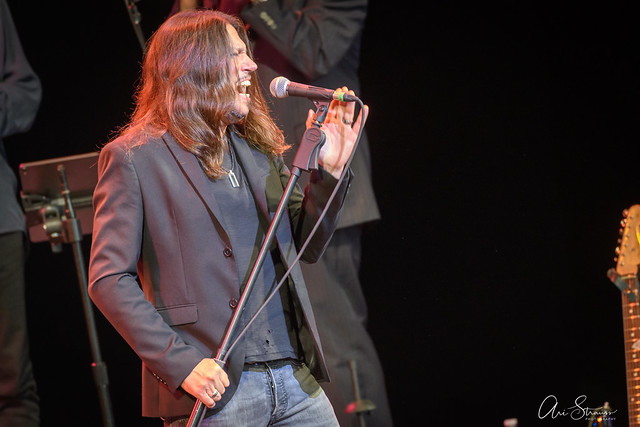 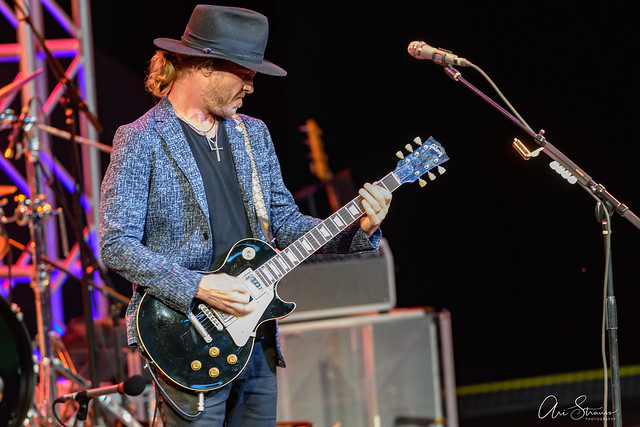 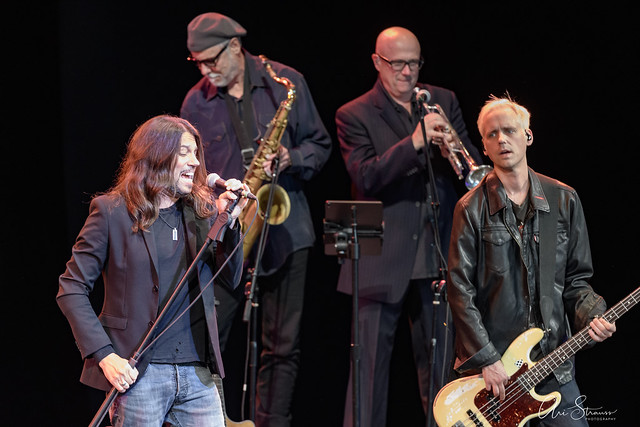 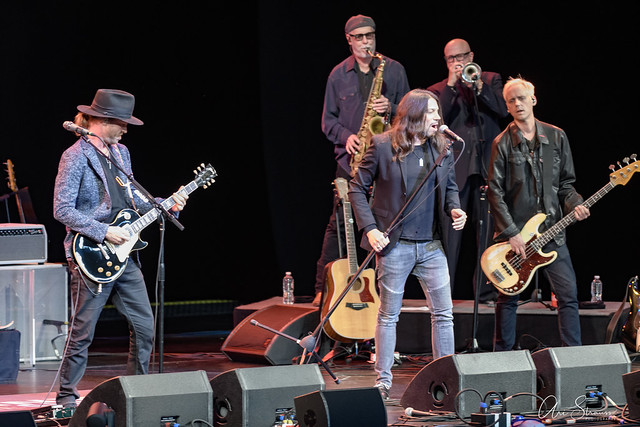 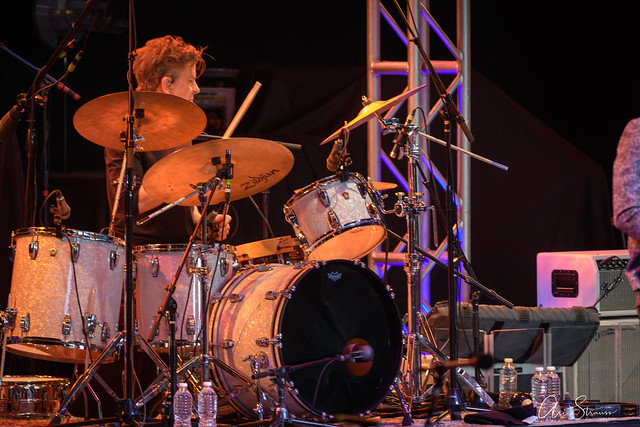 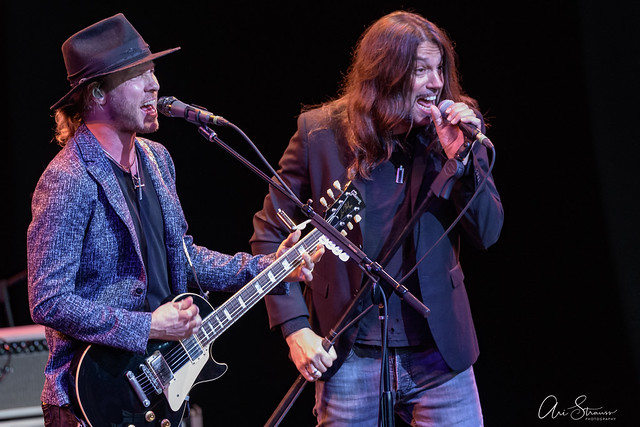 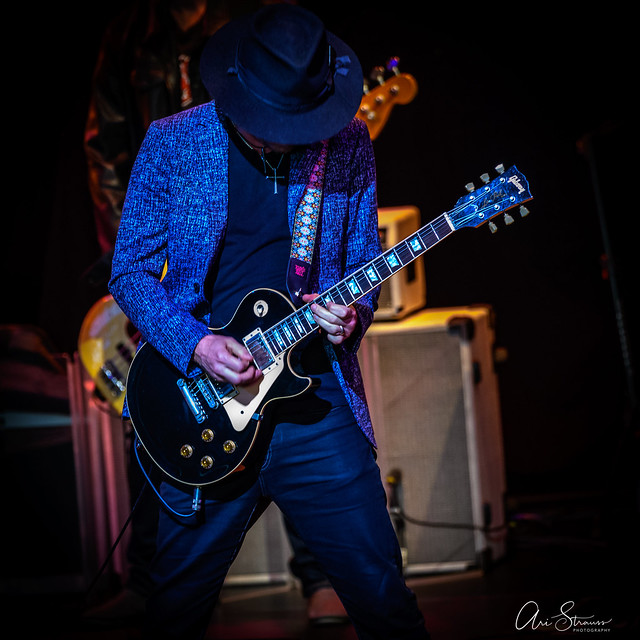 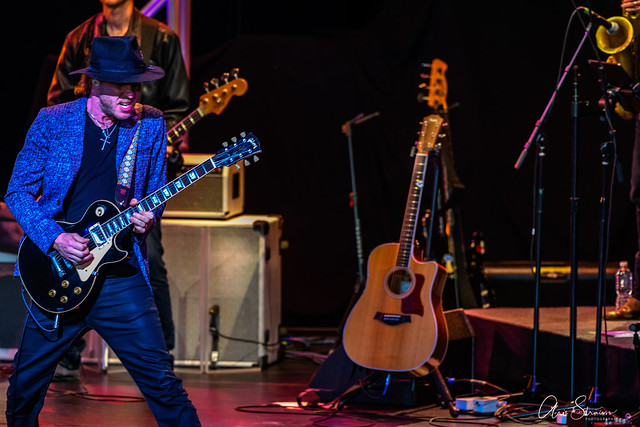 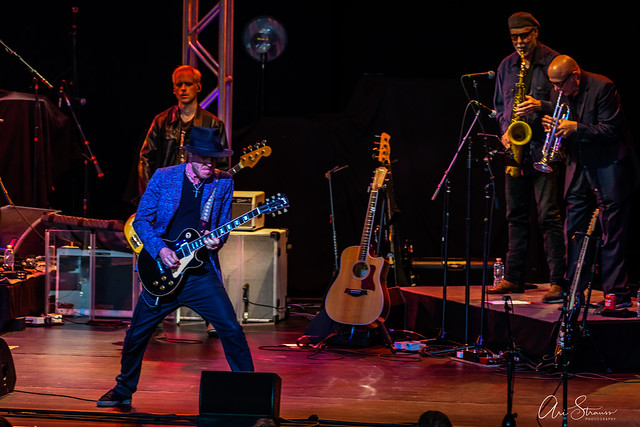 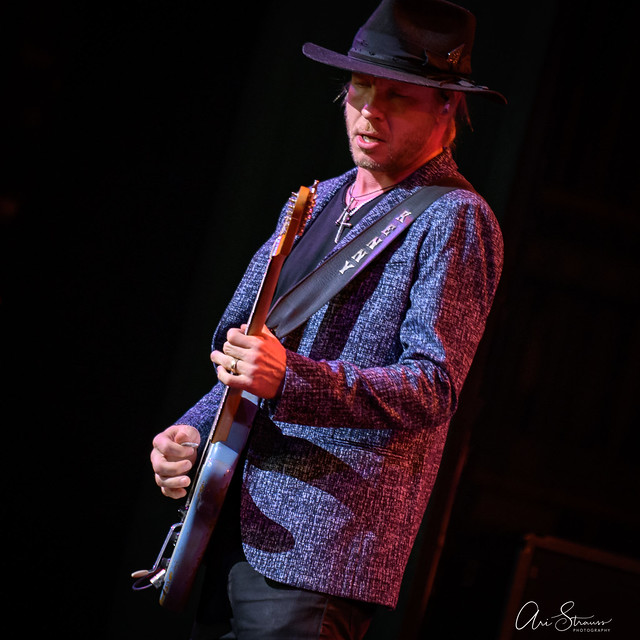 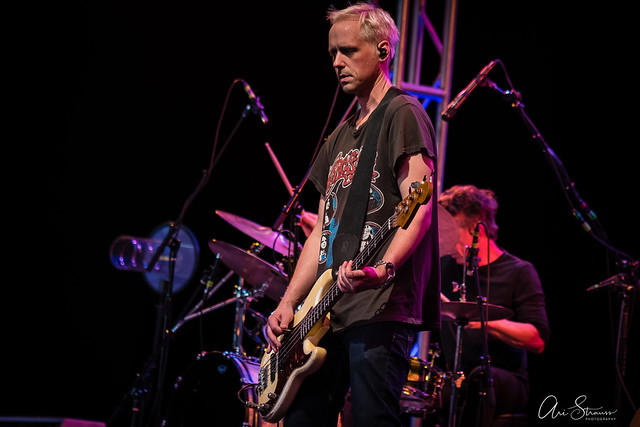 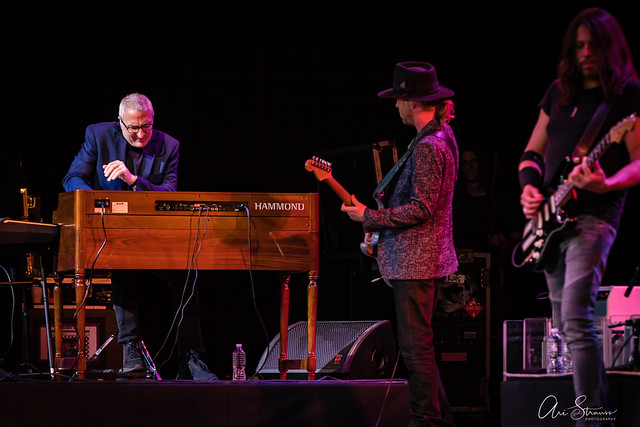 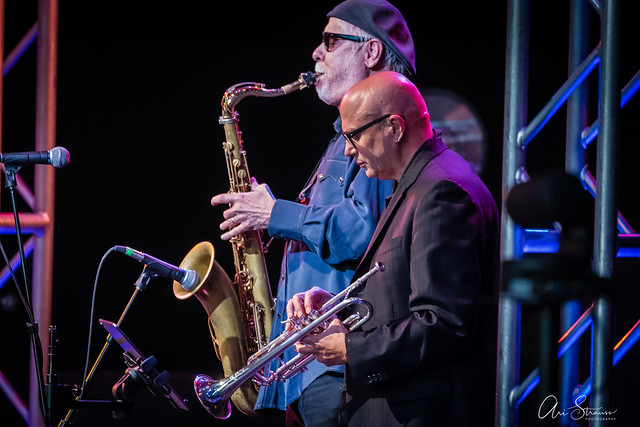 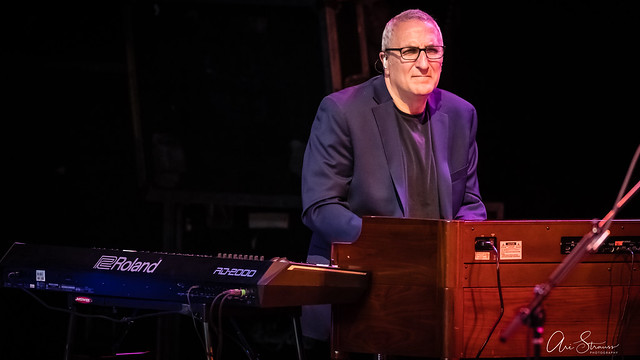 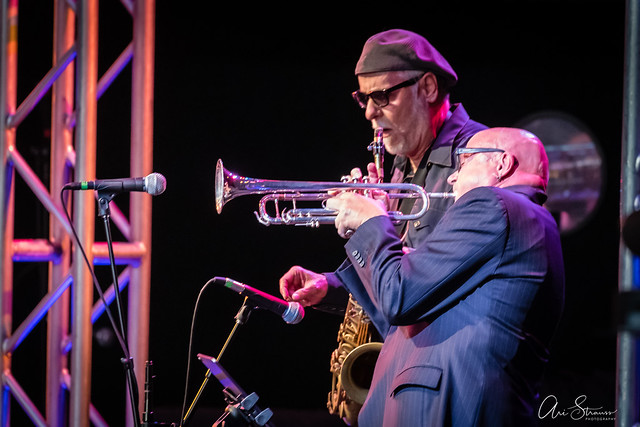 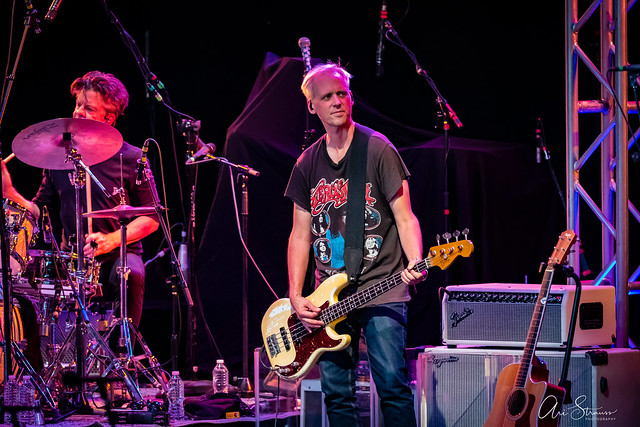 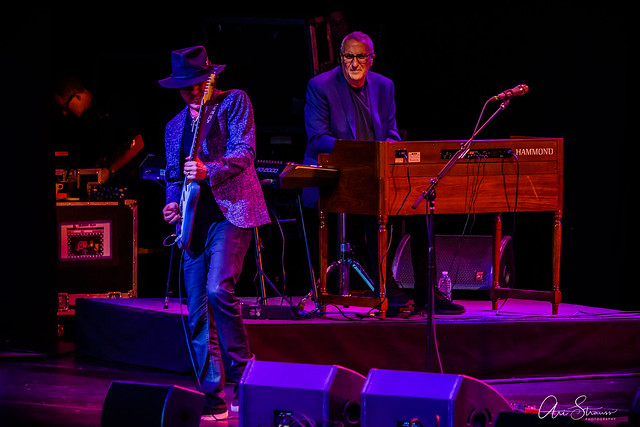