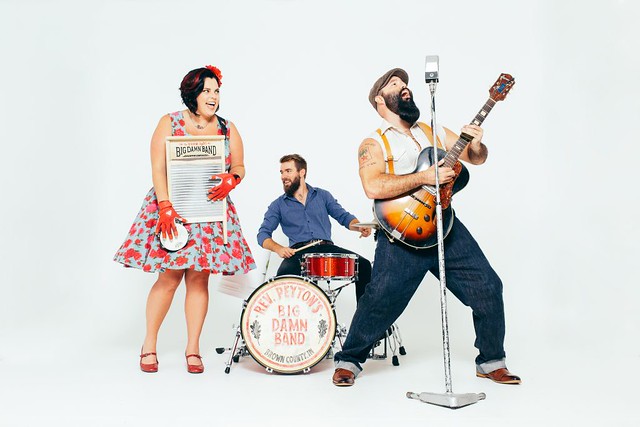 The Reverend Peyton’s Big Damn Band put on an authentic blues performance at The Hamilton Live recently. The good Reverend and his wife, who plays the washboard, and his drummer are “real people playing real instruments.” The Reverend derided the use of taped tracks, which, he said, even some blues bands have come to practice. Not only is it phoney, “it still sounds like shit,” he said.

Reverend Peyton and His Big Damn Band most certainly do not sound like shit. It’s no small irony that the Big Damn Band had only three players — the Reverend made a point to the audience that “the bass player is my thumb”– yet created a booming, raucous, joyful noise. The Hamilton had cleared a pit in front of the stage, and the Big Damn Band had their fans moving and grooving.

The Reverend employed vintage and unusual gear to achieve his desired traditional sound. A true guitar geek, he used the steadfast, trusty National on several numbers. After “It Is or It Ain’t,” he held up his axe and said, “This is a three-string cigar box made by uncle Craig.” Later, he used off a six-string cigar box that had been fashioned into a Coodercaster, named after the legendary Ry Cooder, to play a song that involved buying a wig for a woman. (“If you haven’t bought a wig for a woman,” the Reverend, “you haven’t been living.”) The Reverend perfectly imitated Ry’s guitar scream at the beginning of his cover of “Get Rhythm,” which led me to believe that he constructed this model in imitation of that particular guitar.

The Reverend even had amps right out of the 1964 Sears catalogue. Today’s amps have a perfection that can make them almost sterile. In these Beatlemania-era machines, you can hear the sparks. They spark, they hiss, they crackle. Using these amps introduces a wild, uncontrolled variable into the show. Contemporary amps lets the artist get closer to duplicating performing, while the older amps guarantee that a performance cannot be replicated.

Stream Poor Until Payday by The Reverend Peyton’s Big Damn Band on Spotify:

While the Big Damn Band’s drummer Max Senteney is a relatively staid character, the Reverend and Breezy are a pair of colorful characters. The Reverend wore a black tank top that showed off his many colorful tattoos, and he sported a bushy black beard. Wrapping up “Steal My Shine,” he explained that he’d picked up his pants in Europe because they were light and just kept wearing them. Breezy has a presence that’s every bit as much attitude as physical. The pair have the kind of on-stage dynamic that only exists between a couple, and the realness of the interaction between them added a certain special magic to the Big Damn Band’s show.

After the second song of the set, the Reverend mentioned that this was the Band’s first weekend back in the States after touring in Europe. They’d had the misfortune of touring during what had the been the hottest week on record in the continent. While that only made it comparable to summer in the states, the Reverend said, we have air conditioning and ice water. He joked about his struggles to get ice water at a restaurant. “Do you have water?” he’d ask a server. “Do you have ice? Then you have ice water.”

Really digging into the canon of the blues, the Reverend played “I Been Roundin’ Up Girls All Day,” by the later L.C. Ulmer. L.C., who passed away in 2016 at the age of 87, continued to tour until almost his last years. He once advised the Reverend not to eat black pepper. “Black pepper will kill you!” he declared. And who was the Reverend to argue? After all, the man was 87 years old.

The Reverend took an instrumental break in the show to just “mess around on the guitar.” He demonstrated some “Chuck Berry licks,” showing the tight connection between early rock ’n’ roll and the blues.

The Reverend shared interesting tidbits about his writing process. “Poor Until Payday,” the title track off his latest record, was written in Denmark. He had “I’m Bad, You Know It” in his notebook as “movie theme song.” While it didn’t quite make it to the movies, it has become the theme song for a podcast.

This was a hell of a good time. They songs were catchy, the playing was tight, and the banter was fresh. I absorbed all kinds of interesting information about the blues and about guitars. The Reverend even managed to touch on my squishy spots — my passionate love for Ry Cooder. The Reverend Peyton’s Big Damn are a livewire blues power punch, not to be missed. They’ll be back in the area on November 9, playing the Chad Dukes Veterans Day Memorial Jamboree in Leesburg, a fundraiser to prevent veteran suicide.