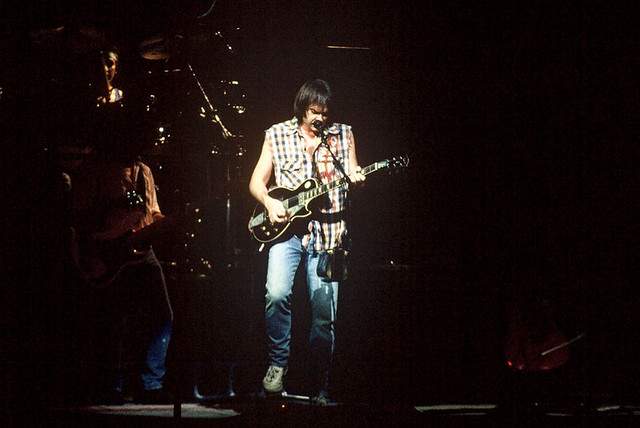 “It sucks! It’s just a fucking racket. I get totally lost when I’m playing guitar. I’ll just play a melody over and over again and change the tone, bend a string, do all that. But I’m totally engrossed in what I’m doing. At one with it. But I suck! I have melodies, and I have a sense of rhythm and drive. But it’s not about me, anyway — it’s about the whole band. It’s about everybody being there at once. When I play I’m listening for everything, trying to drive it all with my guitar. My guitar is the whole fucking band.” — Neil Young, Guitar World, October 2009

I am a child of the ’70s, at least in terms of my musical education and awakening. In 1972, my curious young teenage mind was discovering rock and roll, listening to my little clock radio crank out songs like “Venus” (Shocking Blue), “Long Cool Woman” (Hollies), and “Layla” (Derek and the Dominos). But it was Neil Young — that voice, those melodies — that captured my attention. “Heart of Gold” was in heavy rotation back then, and it has never left my mind since. AM radio rocked back in the day.

Back then we had LPs, and I had to have them all: “Neil Young” (1969), “Everybody Knows This Is Nowhere” (1969), “After the Gold Rush” (1970), and “Harvest” (1972). I listened over and over on my record player, poring over the liner notes of the album jackets. I started taking guitar lessons; my teacher would ask me what I wanted to learn. “Old Man,” “Heart of Gold,” “Needle and the Damage Done,” and for variety, Crosby, Stills, and Nash’s “Helplessly Hoping.” 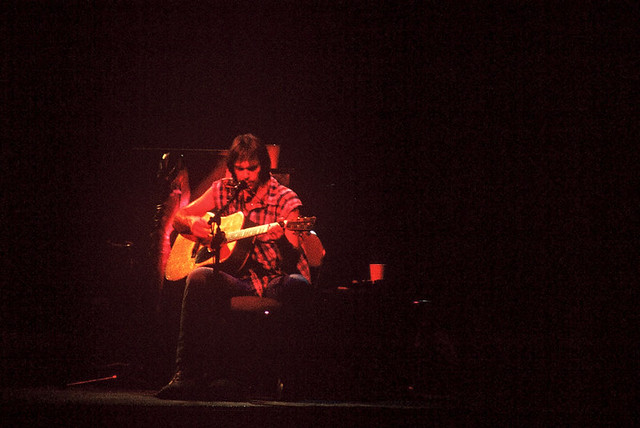 “Heart of Gold” was the song that catapulted Neil to rock superstardom, but as I delved into his catalog, the promise of his music became clear. Some was fairly standard rockstar fare — songs like “Southern Man,” “Ohio,” “Down by the River.” Those were raucous guitar-driven workouts, but others — “Helpless,” “A Man Needs a Maid,” and “Oh, Lonesome Me” — demonstrated his softer, singer-songwriter side. Those tunes were outward-looking, though: an angry (and/or lovestruck) young man railing against the injustices of the world from the safety of a rockstar’s platform. But soon enough the focus of Neil’s life, and mine, would turn inward. And get deadly serious.

Perhaps in reaction to that perceived hypocrisy, or numbed by the weight of the number of drug casualties in the early ’70s, Neil began writing, recording, and performing songs that would never be heard on any radio. The broody teenager I’d become soaked up lyrics like “Down on pain street, disappointment lurks” (“Time Fades Away”) and “The punches came fast and hard, lying on my back in the schoolyard.” (“Don’t Be Denied”), and I felt like Neil was talking to me. That album, “Time Fades Away” (1973) — a live album with no hits whatsoever — was followed by “On the Beach” (1974), a similarly bleak and inward-looking set of songs. 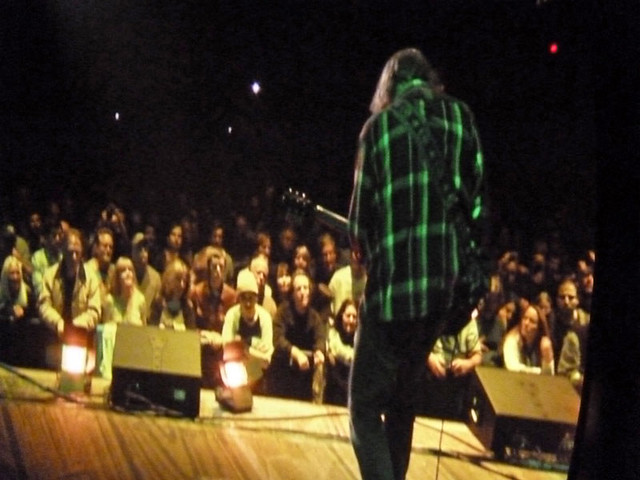 “On the Beach” contains what I consider his first real masterpiece, “Ambulance Blues,” a chronicle of his life up to that point (“Back in the old folky days”), random cultural observations, (“I never knew a man, could tell so many lies”), and the sardonic witty humor beloved by millions of Neil Young fans, (“And there ain’t nothin’ like a friend, who can tell you you’re just pissin’ in the wind”).

Neil’s next album, “Tonight’s the Night” (1975), completed the ditch trilogy, so named for that trio of albums that chronicled his revulsion, and fascination, with rockstar excess, addiction, and death, and an evolving songwriting style that married his storytelling, folk singer leanings with deeply personal and revealing lyrics.

Although “Tonight’s the Night” was released after “On the Beach,” it was recorded prior during the period following the deaths of original Crazy Horse rhythm guitarist Danny Whitten and roadie Bruce Berry. The album’s dystopian and disorganized tone (largely fueled by weed and tequila) is strangely, and poignantly, regarded as his best record by many fans, including yours truly.

Yet the song cycle is paradoxically clear-headed and confronts the delights, and pitfalls, of such indulgences. With lyrics as concise as “I’ll find somewhere where they don’t care who I am” (“Albuquerque”) and desperate, “Well he shot four men in a cocaine deal, and he left them lyin’ in an open field” (“Tired Eyes”), you’d think this album was a complete downer. But you’d be wrong. In the end, it’s quite uplifting and one I can listen to totally sober and come away with appreciation and empathy for what Neil experienced and survived.

Stream Tonight’s the Night by Neil Young on Spotify: 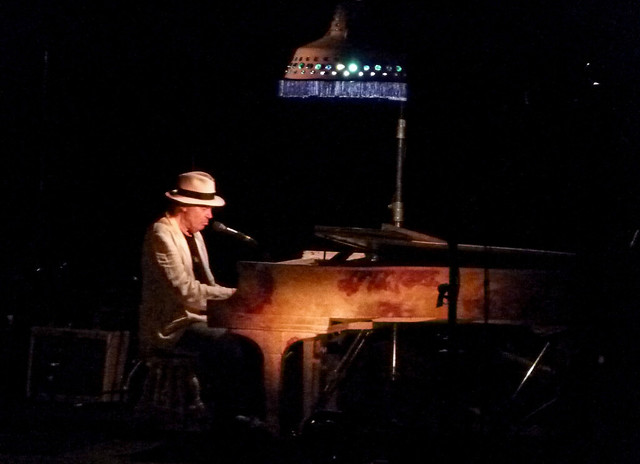 By 1975, and the release of “Zuma,” Neil was a renewed man playing with a revitalized Crazy Horse (his long-time backing band), and only halfway through an incredibly productive and creative decade. I was still in high school, ready to party, and Neil provided the soundtrack.

But I was growing up too, and so was he. His songwriting matured, finding that sweet spot between the inward-looking narcissist and simplistic rebelliousness. The melodies still based on basic three-chord rock and roll structure, but the lyrics were pure poetry — awash with imagery, emotion, and metaphor. Songs like “Pardon My Heart” made it safe for a young man to show vulnerability (“Pardon my heart, if I showed that I cared”). “Barstool Blues” was pure rock and roll fun (“If I could hold on to just one thought for long enough to know, why my mind is moving so fast and the conversation is slow”).

But the masterpiece on this album, and when I truly came to understand the potential of a song to change your life, was “Cortez the Killer.” The song has three chords, 173 words, clocks in at 7:32 and, according to sugarmtn.org (a compendium of setlists, songs, and statistics) been performed 542 times. There are live versions that last over a half hour.

“And I know she’s living there and she loves me to this day, I still can’t remember when or how I lost my way. He came dancing across the water, Cortez, Cortez, what a killer.”

The simple yet insistent melody, punctuated with three separate guitar solos that build to the song’s climax, captivates the listener as the description of an idyllic, uncomplicated society unfolds, “where people worked together, men were straight and strong, and women were beautiful.” It is ultimately destroyed by a stronger and mysterious outside world, embodied by the conquistador Cortez. By the final verse, though, we realize that the song is actually an eight-minute metaphor of innocence lost — the demise of a civilization as cautionary tale for a lover’s betrayal, the death of a relationship and for me, the fragility of love and friendship. 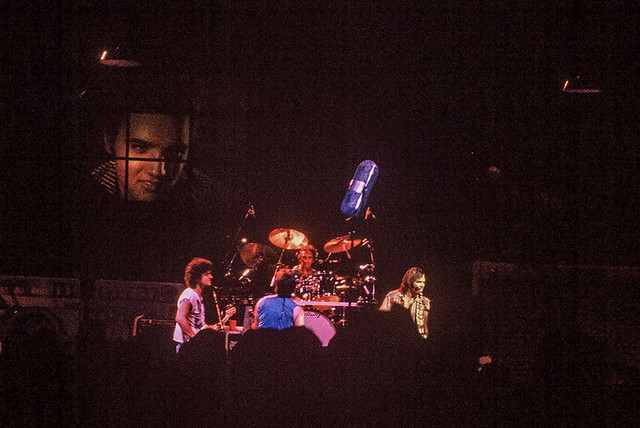 “The king is gone but he’s not forgotten, is this the story of a Johnny Rotten?” (“My My Hey Hey”)

As the decade was winding down, Young’s output ticked up. In the summer of 1977, I was heading off to college, finally on my own. The two things I remember most prominently from those days are that Elvis Presley died and Neil Young released “American Stars and Bars,” two events somehow inextricably linked in my memory. Toward the end of 1977, Young released a three LP greatest hits package, Decade. 1978 saw the release of the acoustic “Comes a Time,” with its “Huckleberry Neil” cover art. In June 1979, he released “Rust Never Sleeps” and the following November, “Live Rust.” With songs like “Powderfinger,” “My My Hey Hey,” and “Thrasher,” Neil cemented his songwriting and performing legacy.

“Thrasher” holds a singular place in the Neil Young canon. The melody clearly borrows from the Dylanesque folk tradition, a standard C-G-Am-F progression with a Dm thrown in on the turnaround to keep things interesting. The poetry of the lyrics is transcendent, autobiographical, and in so many ways, brings images of my own childhood, friendships, loves, and regrets flooding back.

“They were hiding behind hay bales, they were planting in the full moon, they had given all they had for something new
But the light of day was on them, they could see the Thrashers coming, and the water shone like diamonds in the dew…

But me I’m not stopping there, got my own row left to hoe, just another line
in the field of time
When the Thrasher comes, I’ll be stuck in the sun like the dinosaurs in shrines,
but I’ll know the time has come to give what’s mine”

Arguably, the capstone albums of Neil Young’s output in the ’70s, both “Rust” records showcase his writing, recording and because both capture him in live settings (concert and/or studio), they demonstrate Neil’s prowess as a live performer. And although he never duplicated that phenomenal run of albums in the ’70s, his musical instincts and drive have served him well throughout the ’80s, ’90s, and into the 21st century. 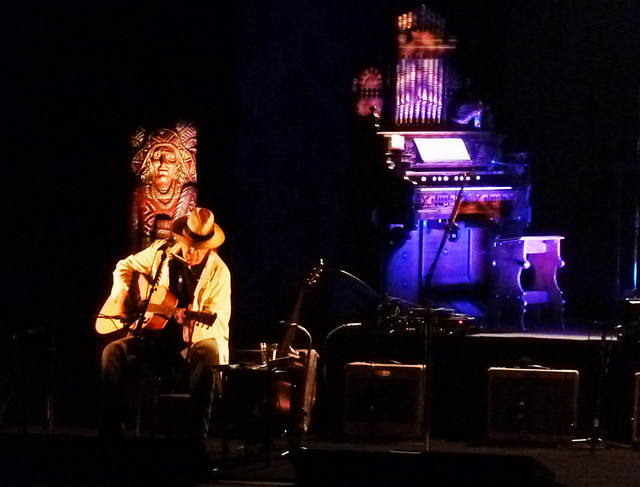 “We’ve been through some things together.” (“Long May You Run”)

Those lines sum up what many of us have felt for decades about the man and his music. Although ostensibly about a car, the song is also an extended metaphor for friendship and loss. And because his songs are usually so intimate and personal, particularly the love songs — to his wife, kids, dogs, motorcycles, cars, you name it, I always hear him singing to us, his audience.

Watch Neil Young perform “Long May You Run” from MTV’s Unplugged in 1993:

Neil Young has never been one for looking back. Unlike so many of his peers, he won’t be embarking on a 50 Year Celebration, Final, or Crazy Horse Reunion tour anytime soon.

Instead, what we get is a musician driven by his craft, an artist with a seemingly bottomless well of creativity, and a man with an unquenchable desire to connect through music. His uncanny ability to see around the corner, to recognize where society and music are headed has prompted him to collaborate with bands as diverse as Bruce Springsteen, Devo, and Pearl Jam. Today, Neil tours and records with Lukas Nelson and Promise of the Real as he embraces a new generation of rockers, continuing to bolster his legacy and reach new audiences. And like Neil Young, I am also of the opinion that age is merely a state of mind. 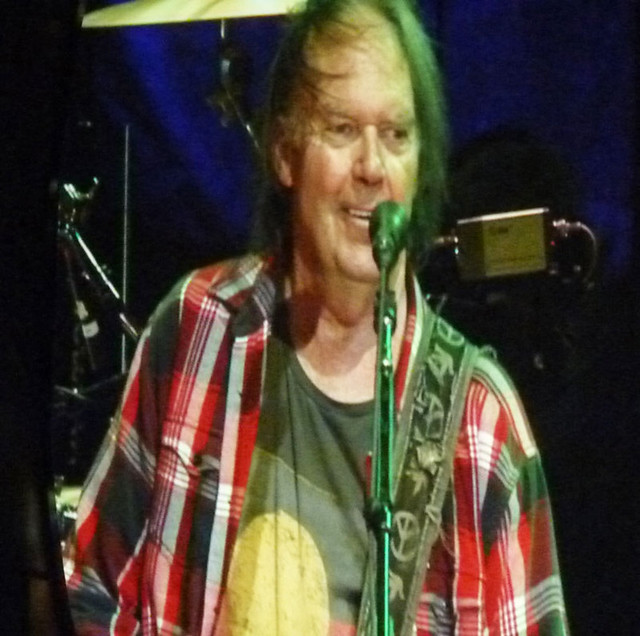 “People my age, they don’t do the things I do, they go somewhere, while I run away with you.” (“I’m the Ocean”)

A few years back, driven by disdain for MP3 technology, Neil set out to develop and market a portable music player, Pono, to store and play high resolution music files. Cost and marketing roadblocks eventually doomed that effort, so he instead found another way to open his huge archive of recordings, communicate directly with fans, and preserve and disseminate his catalog digitally in hi-res quality.

Neil Young Archives (NYA) allows fans to stream, for free, a limited number of songs, browse a timeline of his career, search song lyrics, and access the site’s news section. A modestly priced annual subscription gives you access to the full range of features. As physical music releases become scarcer and streaming services grow in popularity, NYA offers a glimpse of how music may be delivered in the future, perhaps setting a template for other recording artists to follow. Even if fewer fans, including me, are buying his CDs, Neil Young is still driven to remain relevant through his music, outreach and vision. And I’ll buy that.

“Bruce makes you think you, too, can be as great as he is; Neil makes you think he is really no better than you are to begin with. Remember that.” — Eric Alterman, Altercation