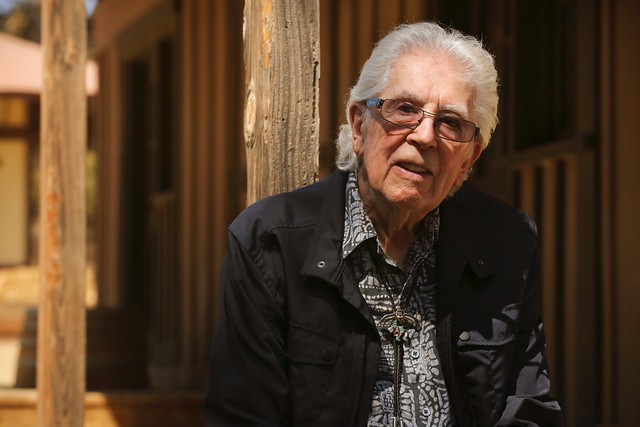 The Hamilton introduced John Mayall on Thursday evening as “the godfather of British Blues.” In his sixth decade as a professional musician, the 85-year-old Mayall still appears pretty spry, and he remained on his feet for his entire performance. John is just as well-preserved mentally, and he filled the transitions between songs with informative context and droll British wit.

In the ’60s, John emerged as the leader of the Bluesbreakers. The band’s lineup featured many big names over the years: Eric Clapton and Ginger Baker, who left to form two-thirds of the power trio Cream; Peter Green, John McVie, and, very briefly, Mick Fleetwood, who left to form Fleetwood Mac; and Mick Taylor, who would later join the Rolling Stones.

Currently, John tours in a four-piece band, with Texan Carolyn Wonderland on lead guitar (and backing and occasional lead vocals), bassist Greg Rzab, and drummer Jay Davenport, all of whom are American. John himself is a multi-instrumentalist, and at Thursday’s concert he played the keys, harmonica, and electric guitar.

Stream Nobody Told Me, the latest album by John Mayall, on Spotify:

John and the band opened with “Dancing Shoes,” which drew applause for its incremental break. John described the second tune, “Riding the L&N” as “kind of a train song,” written by Lionel Hampton in the ’40s, which he’d updated and modernized.

Switching from the keys to electric guitar, John introduced “Dirty Water,” quipping that it was “something you might be drinking.” John turned the vocal duties over to Carolyn, and the audience clapped to the beat as the next song got going.

Carolyn’s guitar work on “Not at Home” elicited a response from the crowd. The audience was a bit too quiet for John, though, who snipped, “Way too much respect here!” and suggested, “Pretend you’re in a club!”

John’s encouragement roused the audience, who sang with the band on the chorus of Louis Jordan’s “Early in the Morning.” Mose Allison’s “Parchment Farm,” John told the audience, “comes from the early days.”

Greg ripped out a funky bass solo on “Ain’t No Guarantee.” The rest of the show featured John’s original pieces “Gimme One More Day,” “Blues for the Lost Days,” and “California.” Before “Blues for the Last Days,” John spoke of “remembering what it was like in the ’60s.” “California,” he mentioned, is from his album Turning Point.

The band left the stage, but came back quickly for an encore to the crowd’s delight. After the show, they all came out to the merch table to sign CDs. John was as generous with his time as he was bountiful in his talents. You would do well to hit the clubs with this prodigious original.