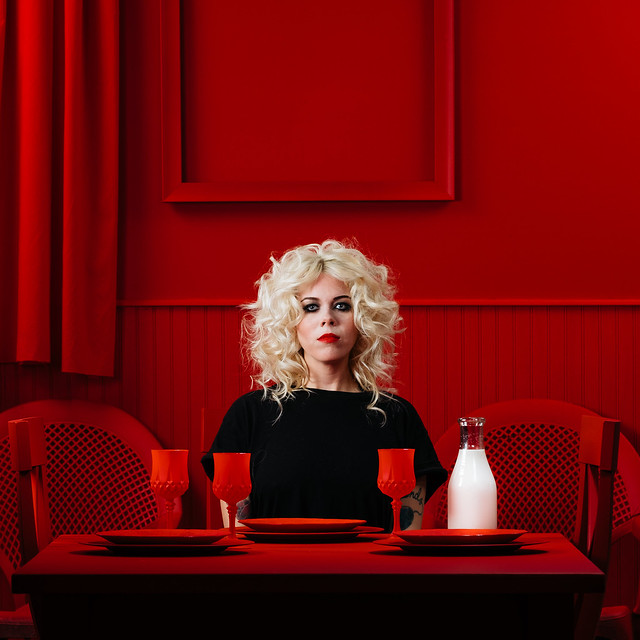 If you’ve never been to a house concert, I’ll explain the concept: They’re hosted in a private home. Unlike at a venue, the host doesn’t take a cut of the cover. All of the proceeds go to the artist. House concerts are ideally intimate and wondrous experiences, and such was the case with a show by Austin singer-songwriter Jaimee Harris just outside DC metro on Saturday.

In a past performance at City Winery with Mary Gauthier, Jaimee has appeared here on Parklife DC previously. I first learned of Jaimee from someone who saw her perform at AmericanaFest in 2018 in Nashville. I listened to her debut album, Red Rescue, and was blown away. As Dave Airel, the host of the Macum Creek Concerts, mentioned when he introduced Jaimee, I named it the debut of the year on Americana Highways.

Jaimee spoke for a bit about opening for and getting to know Peter Case, who had some hits in the ’80s with the bands the Nerves and the Plimsouls, but who has been doing the solo thing for a long time now. Jaimee asked him for advice on how, with musicians selling less records, they can make ends meet. One of his tips was to get a song placed in a vampire love TV show. It hasn’t happened yet, but Jaimee played a song that would be perfect for it.

When she asked if there any first-time house show attendants, Jaime was surprised at the number of positive responses. She brought up suffering from anxiety and depression, which can make it hard for her to even talk. Songs allows her to communicate.
Through a shared guitarist, Jaimee became aware of fellow Austin singer-songwriter Jane Ellen Bryant. She heard Jane’s song about having to move in with her parents and needing a roommate, so she got in touch with her. They ended up sharing a place for four years.

When Jamie gets depressed, she said, she lies around cycling between Law and Order: SVU and Forensic Files. Perhaps, she thinks, knowing that the crime will be solved in an hour comforts her. Jane found her in one of these states, and she urged Jamie to try to work through her depression by writing. The result was the powerful “Depressive State,” a single from her album.

Releasing “Depressive State” led to further exposure for Jaimee. She appears in Chad Cochran’s photo essay “I Didn’t Want to Tell You,” in which musicians discuss their mental health struggles, published in the current (Fall 2019) issue of the roots music journal No Depression.

Jaimee is donating a portion of the proceeds from her t-shirts to the SIMS Foundation, which “provides mental health and substance abuse recovery services for musicians, music industry professionals, and their families to support the well-being of the Austin music community.”

Saturday would’ve been Buddy Holly’s 83rd birthday. Jaimee listened to Holly with her grandmother, who was a Baptist children’s minister who had a very short list of approved musical options. Buddy Holly was the only rocker on the list because Jaimee’s grandmother had a crush on him.

The Buddy Holly Foundation — which, curiously enough, is based in England — invited Jaimee to its big annual meeting in Lafayette, Louisiana. There, she got to work with Dirk Powell, Joan Baez’s bandleader. She learned that alcoholism in traditional Irish music is characterized by the “Fair and Dark-Haired Lad,” leading to a song of the same name.

A Waco-area native, Jaimee admitted that “most of the stuff you’ve heard about Waco is awful and true.” The town entered the national spotlight in the ’90s for a standoff between the FBI and the Branch Davidian cult, led by David Koresh. More recently, an armed conflict between biker gangs erupted at the Twin Peaks restaurant in 2015, leaving nine dead, 18 injured, and more than 170 arrested.

While touring with Mary Gauthier, Jaimee discovered that Tulsa, Oklahoma, is one of her favorite places to visit. She particularly enjoys the Woody Guthrie Center. She’s learned that the folk legend left lyrics for some 1,200 unrecorded songs. Around 2016, the Center found material about his one-time landlord and father of the current president, Fred Trump, in the form of the ditty “Old Man Trump.” Apparently, Fred had racist objections to Woody hanging out on his property with legendary bluesman Lead Belly.

Changing the topic, Jaimee told the audience that Oklahoma incarcerates more women, per capita, than any other state. She praised Women in Recovery, a program that, in conjunction with the George Kaiser Foundation, provides an alternative to prison for nonviolent offenders. In the program, women receive treatment for substance abuse and mental health issues. They get ready to find and hold a job, and their families are strengthened and made whole. The program provides all these services more cost-effectively than prison, and the women go on to become productive, tax-paying members of the workforce.

Jamie’s passion about this topic comes from her four-and-a-half years in the juvenile corrections system. The state mandated that she get sober. After her longest period of sobriety, 75 days, she sought to enter outpatient rehab, but her insurance informed her that she was not considered enough of an alcoholic to qualify. Her assigned social worker advised her to start drinking again so she could qualify. Fortunately, she was able to work out another solution. These experiences led her to write the confessional “Snow White Knuckles.”

Gretchen Graham, Kellie Salome, Jon Dee Graham, and James McMurtry hold a quarterly event in the gallery of Austin’s famed Continental Club with musicians, artists, and writers called the “Tertulia.” They give participants a week to create a piece based on a theme. Jamie attended an event with the theme “Better than it looks.” She initially thought she’d dig into her own life, until she was driving around San Antonio with a directionally challenged friend one day in San Antonio.

To Jaimee’s surprise, the man knew his way around. He revealed that he’d lived there for a year after getting married to a girl he’d met at 17. He proceeded to tell her the tale of coming to San Antonio to meet her family. Inside, the family’s house was all red; the girl’s mother served a meal of ham, turkey, and spoiled milk. He decided he had to save his girlfriend from this nightmare. After they got married, he discovered that she was every bit as crazy as her family, and they split. This became the basis of the title track of “Red Rescue.”

After an intermission, Jamie came back to do songs that may appear on her new record. In one, she asked, “Can we go back to January?”

As it was for many of us, 2016 was a tough year for Jaimee. In addition to the political reasons that made it rough for many of us, Jaimee lost a lot of people she loved. Her friend Chris Porter was killed in a car accident, and her mentor Jimmy LaFave was diagnosed with terminal cancer. That informed one of her new songs. She said that, in conversations with other songwriters, she had come to believe that, through writing, you “get the poison out,” and you “become the storyteller instead of the story.”

At one point, Jaimee belonged to an all-female folk trio in Austin. Somehow, they ended up booked in a biker bar called Sam’s. Jaimee ended up going there to drink because no one there knew her. Eventually, a musician in the community bought the place and fixed it up; now she has a song about it. Sam’s has now inspired a song.

Jaimee just became a full-time musician last year. Prior to that, she worked Tuesdays through Thursdays in a medical office. Fortunately, Austin has a very active night scene, allowing her to still perform and work with other musicians. This meant getting home anywhere from 10 to midnight. Because Jaimee had a roommate, that meant composing songs with fingerpicking, as opposed to strumming. This created a “darker” sound. “If you thought the first album was dark…,” she said.

Moving in a more positive direction toward the end of the evening, she offered a love song, “Tennessee Girl.” Jaimee then spoke about playing at Gatesville Women’s Prison, 30 miles south of where she grew up. She mentioned how hard it is someone with a criminal history to get inside a prison, but it was worth the effort for the moving experience. She really connected with the women over a song about marking the days with Xs and Os.

To end the evening, Jamie played a Bob Childers tune, “Restless Spirits.” That ended a fantastic evening out on Kent Island. The next concert at Macum Creek is Jason Eady and Courtney Patton, which already is almost full.