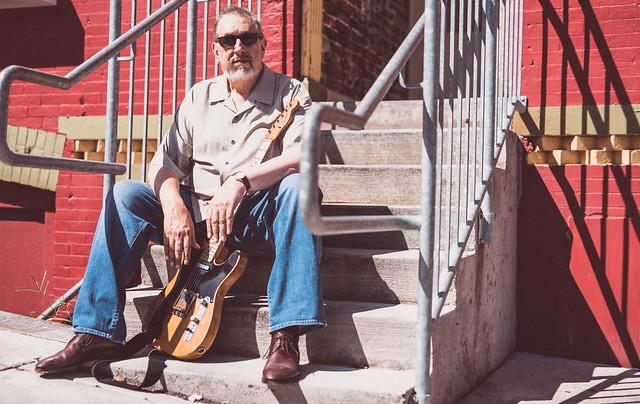 Noted roots artist David Bromberg appeared in a big band format at the Sixth & I Historic Synagogue recently. His band included a horn section—trumpet, trombone, and sax — and strings — fiddle and banjo. But David honored his roots in the blues — he’s a protégé of the Rev. Gary Davis — growling and howling through numbers like his opener, which I think, was Robert Johnson’s “Walkin’ Blues.”

Continuing with blues material, David and his band played another old standard, Blind Willie Johnson’s “Nobody’s Fault But Mine.”

He then moved onto his own material, playing “The Holdup,” from his 1972 self-titlted debut solo album and “Make Me a Pallet,” from 1986’s Long Way From Here. Later in the evening, he played his “Kaatskill Senerade.” David wrote the song about the experience of going on the road and then coming back home, where things have changed. “Rip Van Winkle” inspired the song; its author, Washington Irving, lived in a village right next to David’s hometown, Tarrytown, New York. He said that he thought “everyone would get it,” but “uh-uh.” People seem to think it’s just about his hometown, he told the audience, but there’s to more to it.

Stream Only Slightly Mad by The David Bromberg Band on Spotify:

David’s body of work extends through rock, blues, folk, gospel, soul, and even a bit of country. He covered country-soul artist Charlie Rich’s “Who Will Be the Next Fool.” In a quieter moment, the band sang totally acoustic on the Motown hit “Will You Still Love Me Tomorrow?” For the gospel number “Standing in the Need,” they went a capella.

Originally, David made his bones as a sideman, and he’s a highly skilled player. While all the members of have band flatpick — he even credited one of them as being a better flatpicker than himself — only he fingerpicks. Playing solo, he demonstrated his prowess on an instrumental number. He dedicated an instrumental with the band to the late country-rock and bluegrass legend Clarence White, whose career including playing with the Byrds and the Kentucky Colonels.

As a young man, David attended Columbia University — for a year and a half. He joked that he’s on “an extended leave of absence.” He got involved with the New York folk scene during this time. Back then, he said, marijuana was “really illegal.” If you sang about it, it had to be in code. It’s hard to believe that the lyrics “open up the pot and let high times roll” weren’t blatantly obvious, but it was a different time.

Strumming his guitar, David took a moment to speak out on current events. He brought up his Jewish heritage, which made playing in Sixth & I’s sanctuary especially significant. During his career, he’s had the chance to visit Germany a few times, and even after all these years, it still gives him “the creeps.” How, he asked, will the children being separated from their families, feel about the United States? How will they feel about “this city?”

For his encore, David invited opener Bettye LaVette to join on him stage. Together, they performed “Rock Me Baby,” the blues standard made famous by B.B. King. It was a fitting capstone for an engaging night that spanned the breadth of American music, showcasing David’s versatile skillset.

For more information on David Bromberg, visit his website!