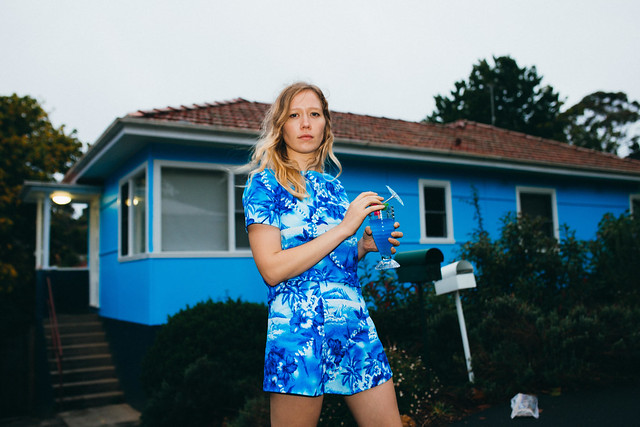 Australian indie folk-rocker Julia Jacklin has a rising profile. Her show in April was originally scheduled for DC9, but it was moved to the Rock and Roll Hotel to accommodate the demand for tickets. Julia sold out the larger venue, and when she returned to DC recently, she played the even larger Black Cat.

Turnout was again quite strong on Nov. 10, an energetic but attentive audience that buzzed at the right times while quieting and showing respect for the artist.

Julia’s set felt right at home in the warm, lived-in space of the Black Cat. Her deeply personal, heartfelt lyrics and lovely melodies provided the audience with a sense of comfort on a cold, dark, early November night. Julia eased the audience in, playing “Comfort” solo. Her band joined her on “Body,” perhaps the centerpiece of the album she released earlier this year, Crushing, a story-song that addresses the vulnerability faced by women who allow their partners to have intimate photos taken of them. In the song, she asks, “Do you still have that photograph? Would you use it to hurt me?”

After “Body,” Julia thanked the audience for coming. She asked how everyone was doing, and told them, “I’m just going to play some songs.”

A talented songwriter, Julia writes direct lyrics that bare her inner life for the audience. In “Leadlight,” she expressed disappointment in a relationship that didn’t work, singing “I won’t blame you now but you lost my love somehow.” The lead guitar screamed through parts of “Cold Caller,” written for her sister, Emily. Addressing Emily, the song goes “Oh my sweet sister / You’ve always been braver than me.”

“You Were Right” addressed the ways people try to make us change. “You were always trying to force my taste,” Julia sang about a restaurant being pushed on her, “But now I’m eating there ’cause I want to.” Looking back to the time when she was a “learner drive,” “Turn Me Down,” with its heavy, steady drumbeat recalls a roadtrip where a partner told her, “I see a bright future / I’m just not sure that you’re in it.” “Convention” bemoans how “that bill will arrive just when all our savings have gone.”

Before “Good Guy,” Julia told the audience, “You all look wonderful.” In the song, she pleaded “Tell me I’m the love of your life / Just for a night / Even if you don’t feel it.” Between songs, she said had been checking her DMs, and she had received unsolicited advice about a lyrics change from a man in Denmark. Reflecting on losing a love in “I Don’t Know How to Keep Loving You,” she asks “What if I cleaned up? What if I worked on my skin?”

“Pool Party” was released as the first single off Julia’s debut album, Don’t Let the Kids Win, from 2016. She filmed the music video for the song in Australia’s Blue Mountains, where she grew up. About a year ago, she released “Head Alone” as the lead single for Crushing. Sunny guitars backed as she sang about putting her personal autonomy ahead of romance. She dedicated the song to “anyone who’s about to break up with someone.”

Watch the official music video for “Pool Party” by Julia Jacklin on YouTube:

Julia finished her set with “Pressure to Party,” a song that catalogs the various pressures she feels in her: pressure to be independent, pressure to behave appropriately, pressure to be self-contained. Returning for her encore, she played the title track of her first album, “Don’t Let The Kids Win.” Julia then declared, “I’m going to be obnoxious and play two songs.” She introduced Avril Lavigne’s “I’m With You” as “a song that meant a lot to me when I was 12.”

Julia truly appreciated the turnout for her concert, saying “You could be literally anywhere else.” I can’t imagine wanting to be, though. Julia’s vulnerability and authenticity made us, as an audience, feel a rare sense of genuine connection to another person’s emotion. This is a rising star who only promises to get better, and I can’t wait to see what Julia Jacklin does in the future.