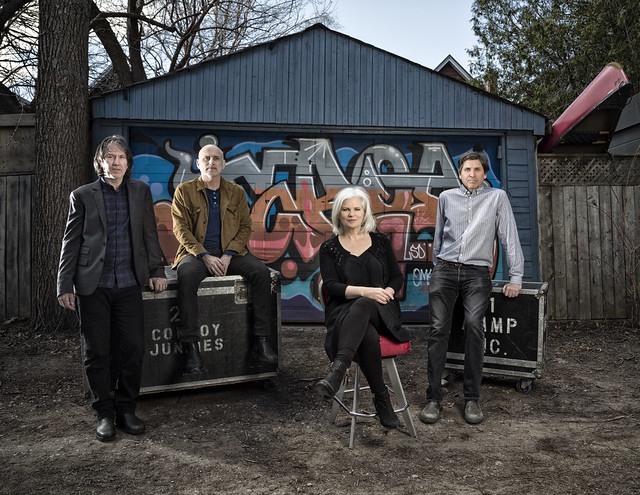 Following their game plan from their previous visit to The Birchmere in July 2018, the Cowboy Junkies went with a proven format for their recent show there. They’d play two sets. The first, slightly shorter set, would mostly consist of songs from their latest album, All That Reckoning, while the second set would comb their extensive catalog from more than 30 years together.

Plans are good; routine is good. It tends to make things go more smoothly. But not always. As Margo Timmins, one of the three siblings that make up the core of the Cowboy Junkies, began to sing the dark, brooding lyrics to the title cut from the band’s latest record, she realized that the audience couldn’t hear her: Her mic was dead.

The Cowboy Junkies handled it like pros while a technician took care of the issue. Margo bantered with the crowd, and her brother Michael continued to play droning, fuzzed-out, hypnotic guitar chords. When she had a live mic, Margo quipped, with all the good cheer often attributed to our neighbors north of the border, “It’s fun when things go wrong.”

“Sing Me a Song,” Margo explained, is about how “we have to just like each other and be good to each other.” The ethereal journey continued with the harmonica intro to “Cheap Is How I Feel.” Over the span of their career, the Junkies have married a brand of dream pop with blues, country, and folk; traditional instruments appeared frequently in their performance.

Recently, Margo lost a friend at the age of 49. She dedicated “Dreaming My Dreams with You,” from the group’s 1989 breakout album, The Trinity Sessions to her lost friend. Clearly connected to Waylon Jennings’s “Dreaming My Dreams,” it was one of two songs with callbacks to an older generation. “Blue Moon Revisited,” played in the second set, is subtitled “Song for Elvis.”

The set continued with “Missing Children” and “Mountain Stream.” The former employed mandolin, while the latter made use of the steel guitar. Before ending the set with the politically charged “The Things We Do to Each Other,” Margo the audience for listening to their latest material, admitting that “it’s hard to sit quietly when you’re waiting for ‘Sweet Jane.’” Included in the second set, the Junkies originally covered the Lou Reed composition as the lead single of their breakthrough 1989 LP, The Trinity Sessions.

Stream All That Reckoning by the Cowboy Junkies on Spotify:

The second set began with “A Common Disaster,” from the 1996 album Lay It Down. After “Sweet Jane,” the band rolled on into “My Little Basquiat.” The Junkies pivoted to an acoustic setup, with Margo accompanied by just acoustic guitar and mandolin, to cover the late singer-songwriter Vic Chesnutt’s “Supernatural.” “Supernatural” appeared on the second LP in the Nomad Series, which consisted entirely of covers of Chesnutt’s work.

“Since you’re here,” Margo said, “you kind of like sad, miserable songs.” She encouraged the audience to listen Vic, and to give the music time, to get used to his unusual vocal style.

Describing “Fairy Tale” as one of Michael’s “most beautiful songs,” Margo spoke about how it reminded her of a time with her son, Ed, now 17. Some time ago, her son’s principal had her pulled out of a recording session to come to his school, where the principal informed Margo that he was singing. The problem, as she explained, was that what he was singing was frightening the other children. Ed had been listening when Margo practiced songs in the car, and had absorbed some of them.

The rest of the band returned after “Shining Teeth,” the only song from All That Reckoning in the second set. Together, they closed out the set with “I Don’t Get It” and “Good Friday,” ending on “Blue Moon Revisited.”

For their encore, they covered David Bowie’s “Five Years” and finished up with “Misguided Angel.”

The Cowboy Junkies affect a certain kind of gothic atmosphere: dark, but refined. It’s a style that influenced artists from Mazzy Star to Neko Case, and a whole new generation, including great talents like Anna St. Louis, and it remains vibrant today.

Visit the Cowboy Junkies’ website for more music and tourdates.