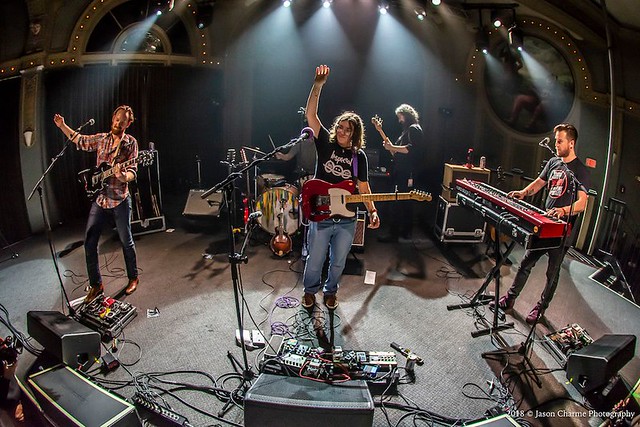 For 13 years, Portland band Fruition has been playing Americana that looks back to great bands of the ’60s and ’70s while being wholly contemporary. Influenced by the Beatles and Crosby, Stills, and Nash, Fruition splits its lead vocals amongst Jay Cobb, Kellen Asebroek, and Mimi Naja, and they feature fantastic three-part harmonies. Their remarkable chemistry was on display at Union Stage in DC recently.

All three singers in Fruition are multi-instrumentalists. On Feb. 6, they took turns on guitar, with Jay also on harmonica, Mimi on the mandolin, and Kellen on keyboards. Rounding out the quintet were bassist Jeff Leonard and drummer Tyler Thompson.

When I spoke to Kellen recently, he explained that the band was pursuing a deliberate change in strategy when it came to releasing music. Shifting away from putting out an LP every few years, Fruition instead had a pair of Eps come out in the last several months: Wild as the Night and Broken at the Break of Day. They’re influenced by the experience of a band happening mostly at night, with the harsh mornings that can follow.

Prior to recording these two EPs, Fruition released an LP just a year earlier, Watching It All Fall Apart. Having recorded all this music, they’ve found that they have a ton of material to play live. Over a nearly two-hour set at Union Stage, they played some 20 songs.

The band opened with two songs from Watching It All Fall Apart, “Stuck On You” and “Turn to Dust,” and they capped off the set with “Lonesome Prayer” and “Northern Town.” After the single “Driving Into the Storm,” they did three songs from the latest EP: ““Dawn,” “Counting The Days,” and “For You.”

Stream Watching It All Fall Apart by Fruition on Spotify:

Returning to Broken at the Break of Day, they would also play “Where Can I Turn” and “Do What You Want.” Introducing the latter song, they expressed their frustration with the federal government here in DC, and said that, with so many us working for it, we might understand better than anyone how they feel. From the Wild as the Night, the set included “Forget About You,” “Don’t Give Up on Me,” and “Sweet Hereafter.”

The next three were off their 2013 album Just One of Them Nights: “Blue Light,” the title track, and “Whipporwill.” They drew on their EP fire for “Baby Let’s Go,” then performed “Santa Fe” and “The Meaning,” the latter a particular crowd favorite, from their album Labor of Love.

With “Northern Town,” Fruition wrapped up it with a jam session. They received a rousing cheer from the crowd, who had packed Union Stage to see them.

For more music and tour dates from Fruition, visit the band’s website.