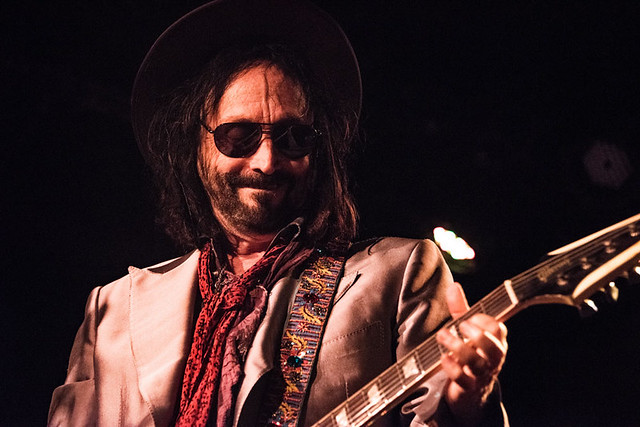 Mike Campbell performs at The Birchmere on March 28, 2022. (Photo by Marc Caicedo)

“I was born to play guitar and I sure do love my job!”

One might think that a Monday night is a time for quiet reflection and preparation for the week ahead: planning dinners, work schedules, going to bed early. But this time was a little different. Mike Campbell & The Dirty Knobs recently rolled into town and delivered a performance that, for nearly three hours, rocked from beginning to end at The Birchmere. No quiet reflection or getting to bed early this night!

Touring in support of their recently released second album, External Combustion (BMG), this date had been delayed three previous times in 2020 and 2021. As Mike announced from the stage finally on March 28, this was their first “real” tour and I suspect all that pent up anticipation resulted in a high energy three hour show that included songs from their two albums and a smattering of well received cover tunes.

The fact that I spotted fans representing at least three generations was an indication of how beloved Tom Petty’s former lead guitarist is. At one point, a lucky kid, probably around 10 or 11 years old, was enlisted by Mike’s guitar tech to take a guitar onstage to him. Just one of many touching moments, the whole evening felt like a homage to Petty’s spirit as well as a long delayed and overdue introduction to Campbell as frontman.

Campbell first met Petty in the early 1970s when they formed Mudcrutch and went on to become a popular act in north Florida. Relocating to Los Angeles and signing a record deal with Shelter Records in 1974, Mudcrutch released a soon forgotten single and broke up soon after. The duo persevered, however, and in 1976 founded Tom Petty and the Heartbreakers along with former Mudcrutch member Benmont Tench (keyboards), Ron Blair (bass guitar), and Stan Lynch (drums). Over the next 41 years, until Tom’s passing in 2017, the band was known for its easily identifiable sound and its dedication to songcraft.

The Petty covers were all introduced in a loving yet low key manner (“my friend Tom wrote this one…”). For myself, and I suspect most of us in the audience, the evening’s highlight was the was the heartbreaking performance of “Refugee” (from the 1980 Damn the Torpedoes album). The original, cowritten by Campbell and Petty, is a straight-ahead rocker but at The Birchmere, it was presented as a lilting Irish waltz, with Mike introducing the song as “having as much relevance today as it did 40 years ago.”

The evening wasn’t all about Petty’s legacy, though. Mike Campbell & The Dirty Knobs are forging their own identity, sound, and attitude. Although the band’s been around for over 20 years, at 72, Mike’s come into his own as a bandleader and onstage focal point. As Campbell has said bout The Dirty Knobs’s music, “It’s rougher-edged [and] slightly over-driven, less polished, lots of Sixties influence: The Kinks, Led Zeppelin, The Animals. It’s something I probably should have done a long time ago, but I didn’t ’cause I was wrapped up in the Heartbreakers.”

Along with guitarist Jason Sinay, drummer Matt Laug, and bassist Lance Morrison, Campbell hit The Birchmere stage with the opening track from the new album, “Wicked Mind.” Initially running through a selection of up-tempo, rockin’ tunes they slowed things down with “Irish Girl,” a lovely waltz from their 2020 debut album, Wreckless Abandon (BMG). After another up-tempo number, “Dirty Job,” the evening’s first audience participation song was up, the lyrics of the chorus not too difficult to follow: “Fuck that guy, fuck that guy, it ought to be a crime, he ain’t no friend of mine, fuck that guy.”

Watch the official video for “Fuck that Guy” by Mike Campbell & The Dirty Knobs on YouTube:

That was followed by the extraordinary “I Still Love You.” A blues piece that channels the Beatles’ “She’s So Heavy” featuring an extended lead guitar dripping with the emotion and despair the blues is meant to convey. Another new song from External Combustion, “State of Mind,” a duet with Margo Price, showed Mike’ songwriting versatility, not to mention his ability to handle a wide range of material.

The final third of the show featured a couple more Petty covers (including the aforementioned “Refugee”), more up-tempo Dirty Knobs tunes, and a crowd eating out of Mike’s hand-such was the love for this music and the man. “In This Lifetime” with its harmonics, soothing melody, and gorgeous chorus, featured another extended solo from Campbell that, no doubt, brought tears to every guitar player in that room. The encores, themselves stretching out to another mini set, finally ended at nearly 11:30 with the Bo Diddley inspired jam that included snippets of “I’m a Roadrunner,” the Allman Brothers’ “Mountain Jam,” and Cream’s “Glad.” As Mike and the band left the stage, he came to the microphone one last time to proclaim his love for music with the quote at the beginning of this article. Yes, indeed, Mike, and we love when you play it.

Mike Campbell has collaborated with many of rock’s giants over the past 50 years. His Wikipedia page is a who’s who of rock royalty: George Harrison, Bob Dylan, Jackson Browne, Johnny Cash, Don Henley, Roger McGuinn, Stevie Nicks, The Wallflowers, Fleetwood Mac, and scores of others. Of course, he’ll long be credited as Tom Petty’s lead guitarist, songwriting compadre, and brother in music. Today, though, Mike Campbell is forging a new identity and legacy as a bandleader whose music encompasses diverse genres while still hewing to the tried-and-true magic of rock and roll.

Mike Campbell & The Dirty Knobs will continue their headlining tour through the spring and then team up with Chris Stapleton to play arenas and amphitheaters this summer. Find more information on the band’s website.

Here are some photos of Mike Campbell & The Dirty Knobs performing at The Birchmere on March 28, 2022. All photos courtesy and copyright Mark Caicedo. 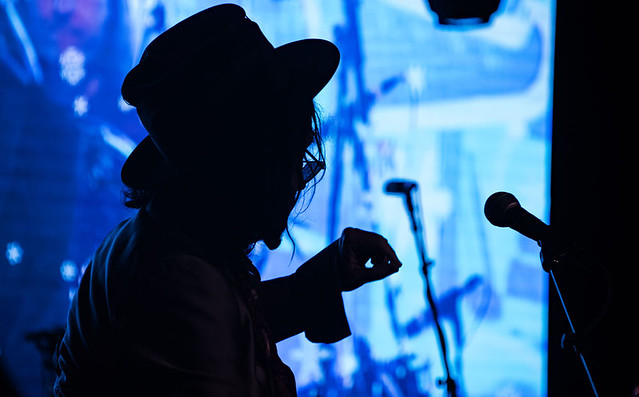 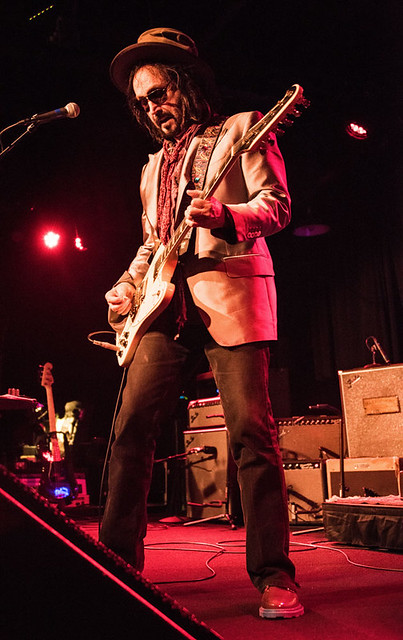 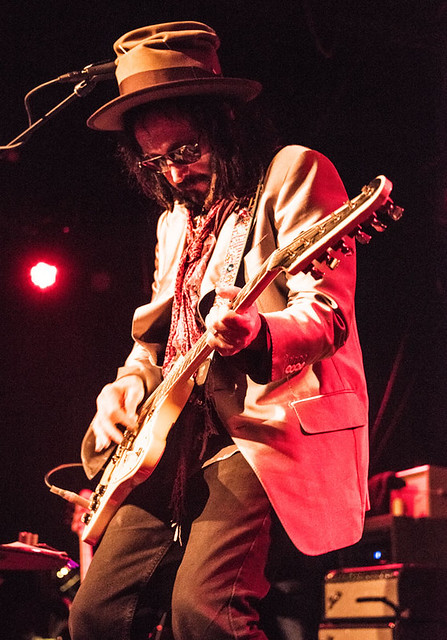 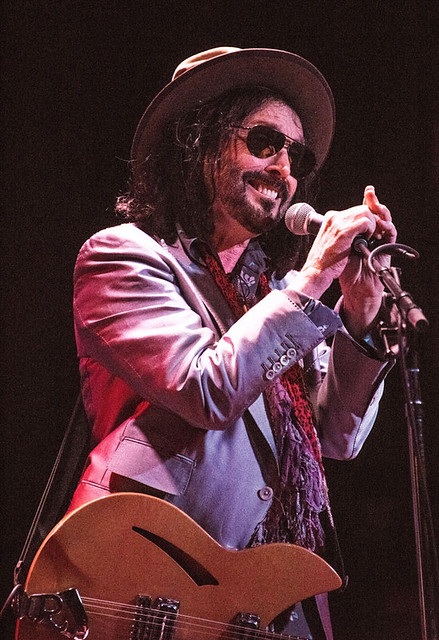 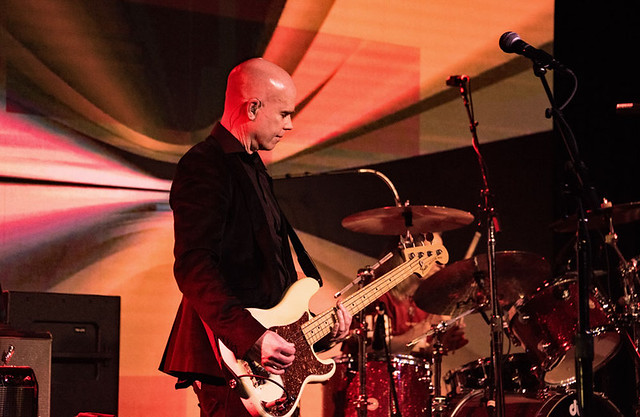 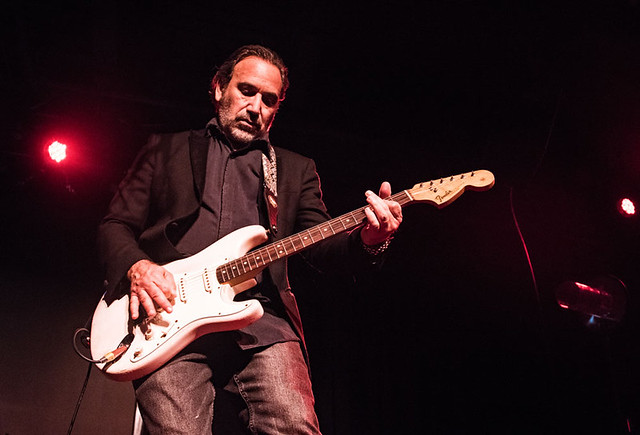 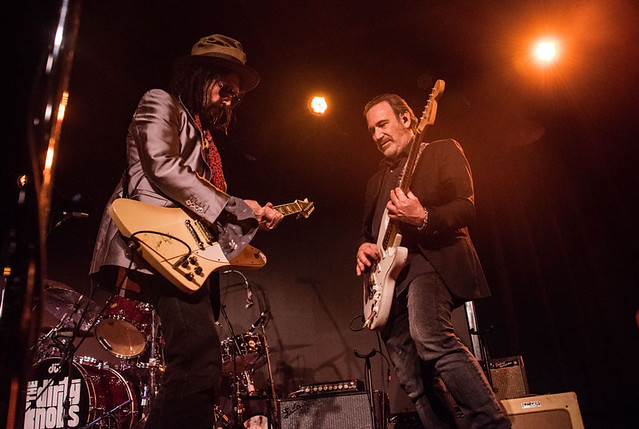 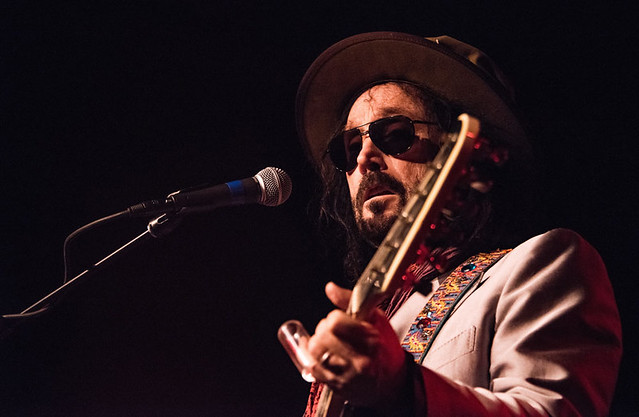 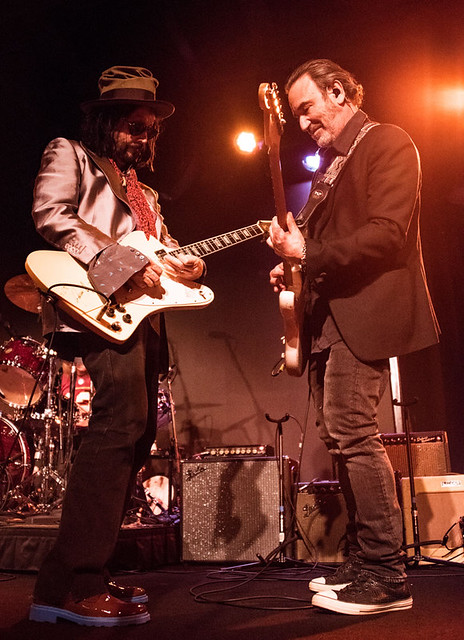 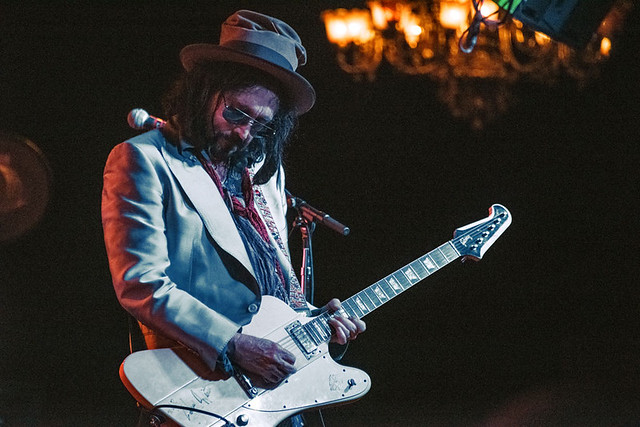 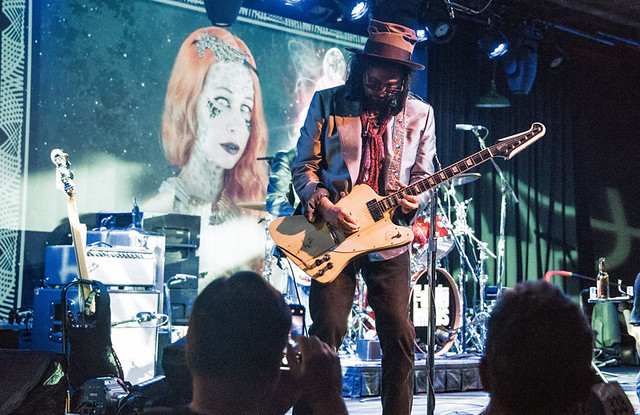 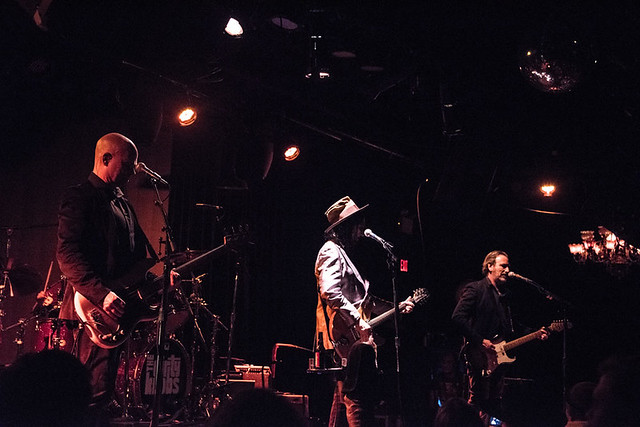 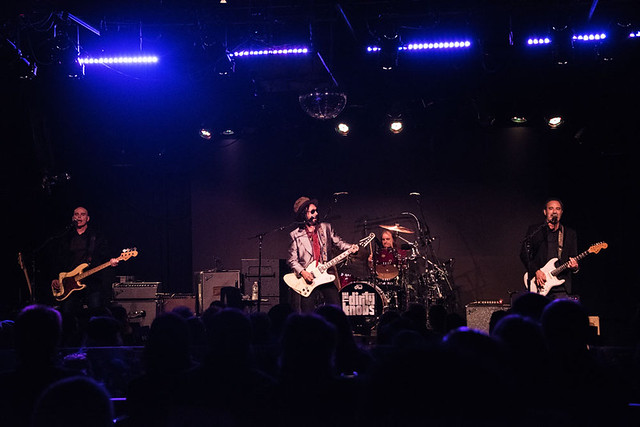 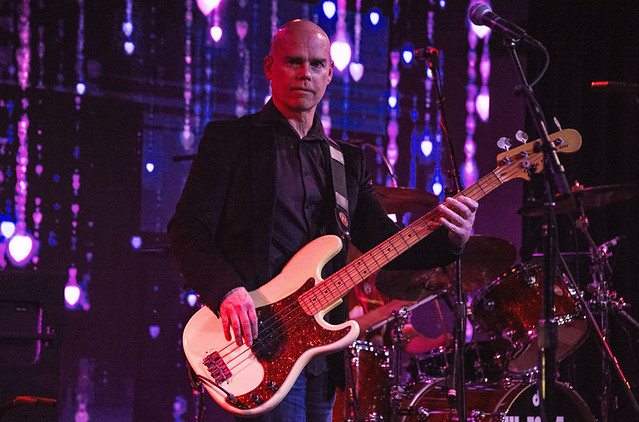 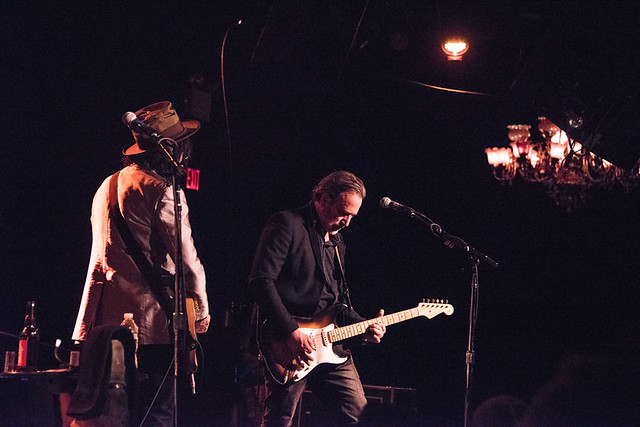 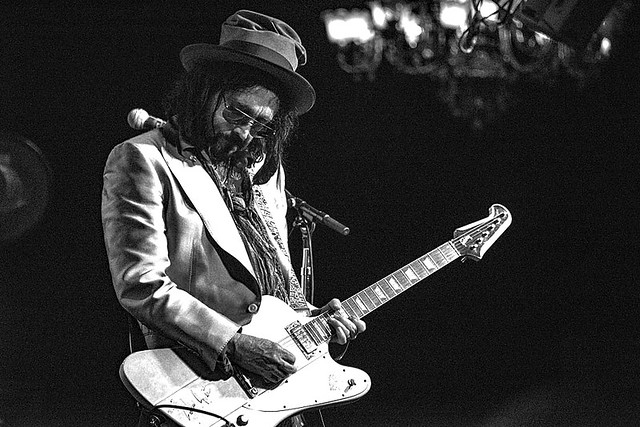