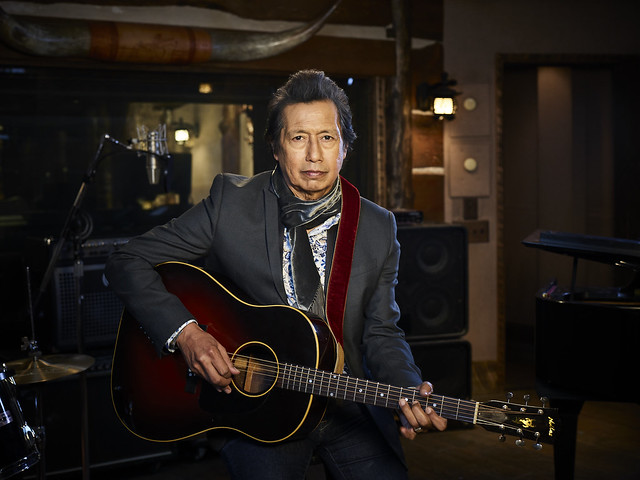 Alejando Escovedo has been playing music for a long time — longer than I’ve been alive. He recently told the audience at The Hamilton Live that he first came to DC in 1978 as part of the punk band The Nuns. They played the Atlantis with The Fleshtones. The club had an apartment — which he emphasized was terrible — and, after the show, Patti Smith came to visit.

When a veteran performer knows an intimate venue and comes with a plan, an audience can get an incredible show. That was the case Saturday evening, as Alejandro performed songs and delved into the stories behind them. The highlight of the show came when he and his band left the stage and went into the crowd to perform “I Wish I Was Your Mother” and “I Was Drunk” totally acoustic, no mics, just instruments and voices. It was Alejandro on guitar, with his bandmates on fiddle and tambourine. The former song, he mentioned, was one he wrote to take part in Austin song swaps.

Though he’s been a musician his entire adult life, Escovedo didn’t start writing songs until he was 30. This was after he moved to Austin in 1980. He was born in Texas, but grew up in California, and his early career occurred in San Francisco’s punk scene. After going back to his native state, he was part of the cowpunk bands Rank and File and the True Believers, and he launched his solo career in 1992 with the album Gravity.

The show at The Hamilton Live on Sept. 17 was a long time coming. “These were shows that were booked almost three years ago,” Alejandro said, recounting how they been delayed at first by the covid pandemic, then cancelled. He admitted he’d considered giving up touring, as many of his friends had. The show was worth the wait, though, as it proved to be one of the best I’ve seen since live music returned last year.

The set included both loud, electric numbers, as well as the extremely intimate acoustic songs I’ve mentioned. Alejandro and his band started off with a a couple of acoustic numbers, “Wave” and “The Way It Goes.” These songs leaned into his singer-songwriter side.

“It’s gonna get louder now,” he said, exchanging his acoustic for an electric guitar, then playing “Dearhead on the Wall,” followed by “Farewell To The Good Times.” One of the great things about this show is that these songs differed so strongly from the first couple, owing much more to his punk origins. “This Bed Is Getting Crowded,” he told the audience, was written “from stories that I heard from other people.” It’s about a lover who talks about other lovers in bed.

Escovedo released his last original album, The Crossing, in 2018. (A Spanish-language version of the album, La Cruzada, was released last year.) It’s a concept album, inspired by his experience touring in Europe with the Italian band Don Antonio. As he explained, he noticed the similarities between southern Italy and Mexico. The Crossing tells the story of two teenagers, one Mexican and Italian, who meet while working in the former’s uncle’s restaurant in Galveston, Texas and journey across the Texas. It’s a story brimming with Americana — the beat poets, the films of Sam Peckinpah, and punk rock music. Escovedo played the track “Teenage Luggage.”

Recently, Alejandro went to New York to perform in a tribute to Ian Hunter, best known as the lead singer of Mott the Hoople. He mentioned how important and influential that band was to him, which made singing those songs a daunting task. It went well, though, and it’s looking like it’s going to lead to dates in Europe. He covered Ian’s “Irene Wilde.”

Other songs in the set included “Sensitive Boys” and “Something Blue.” To close the main set, he played “Always A Friend” from Real Animal, which he cowrote with Chuck Prophet. He mentioned being a spokesperson for the Prevent Cancer Foundation, as well as the fact that Chuck, who has been battling lymphoma, is doing much better, and is likely headed back out on the road in a few months.

This was a very intimate show, and that was evident in the encore. He dedicated “another very old song” called “Sometimes” to his friend Paul Kennerly, who lived on Avenue D in Austin those many years ago. The show concluded with “San Antonio Rain” and “Dancing the Night Way,” ending a fantastic show on an upbeat note.