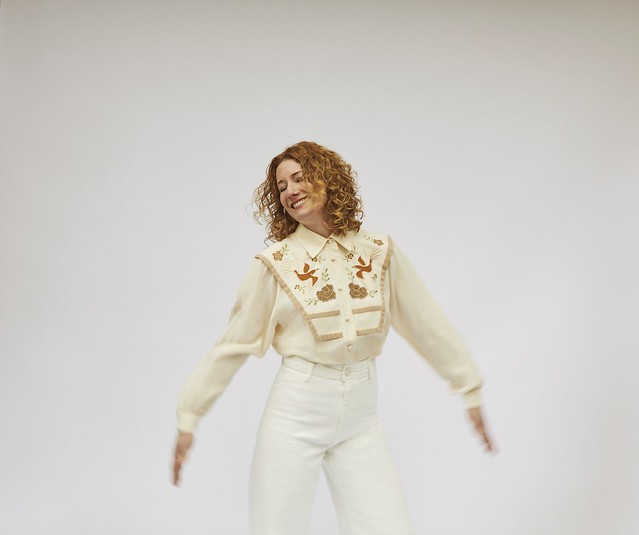 At The Birchmere recently, Kathleen Edwards struggled to deny that one gig can make a career. Twenty years ago this month, she released her debut album, Failer, in her native Canada. That was six months prior to its American release on an independent label based in Austin, Rounder Records. A few months after that release in 2003, she appeared on Letterman, with his bandleader, Paul Schafer sitting in with her and her crew as they played “Six O’ Clock News.”

During her show at The Birchmere on Sept. 20, Kathleen spoke in glowing terms of how welcoming David and everyone there was, and how much this appearance did for her career.

The daughter of a Canadian diplomat who spent parts of her childhood in Korea and Switzerland, Edwards is part of a generation of Americana and alt-country songwriters who’ve been influenced by the ’90s boom and, most especially, Lucinda Williams. Both bring a very regional sensibility to their lyrics. While the South is present in nearly all of Williams’s songs, there’s a distinctively Canadian character to Edwards’s tunes like “Hockey Skates.” Ice hockey, of course, is extremely popular in Canada, far more than so in the United States.

Between 2003 and 2012, Edwards released four albums. Following the end of her tour for the 2012 album Voyageur, she took an extended hiatus from the music industry. She opened a coffee shop, Quitters, in the suburbs of her hometown, Ottawa, in 2014. The name poked fun at the idea of her “quitting” her music career. Edwards has revealed she took a break from music in part to deal with depression. Life on the road makes it difficult to get the support necessary to deal with mental health issues. Earlier this year, Quitters closed; as Edwards told the crowd, she’s been touring relentlessly for several months.

In 2020, she came back from that hiatus with the excellent Total Freedom. The title comes from a line in “Birds In A Feeder,” which led off her set. This was followed by “Glenfern,” about a house she shared with her ex-husband (and current guitarist) Colin Cripps. It was this song that sparked the writing and recording of Total Freedom. It was somewhere around this point in the show when Kathleen was adjusting her guitar and monitors and asked, “Is that me?” to which I replied, “It’s all you!” This got a healthy cheer from the crowd.

After “Glenfern,” Edwards asked the audience if they wanted to hear some old songs. She played the aforementioned “Hockey Skates,” followed by the magnificently named “Goodnight, California” and one of her charting hits, the sultry “Change The Sheets.” She then brought out opener Matt Sucich to sing a few songs, beginning with “Who Rescued Who?” from her latest album. It’s a real tearjerker, a song about the loss of her beloved rescue dog. I am not ashamed to say that this song always moves me to tears.

While she’s been touring relentlessly, Edwards plans to keep going for a while longer, as she’ll be joining The Last Waltz tour later this year. Along with a group of artists that includes Warren Haynes,  Jamey Johnson, Don Was, and a host of others, they’ll be recreating The Band’s legendary farewell concert. She suggested that guitarist and songwriter Robbie Robertson might even make an appearance. The tour will be coming to the Warner Theatre on Nov. 12. (Buy your tickets online now for The Last Waltz at Warner Theatre!)

As a Canadian artist working in Americana, The Band is a major influence on Edwards’ work. Her guitarist, Colin Cripps, is from Hamilton, Ontario, The Band’s point of origin. She covered “Evangeline” on Tuesday with Sucich accompanying her. Someone in the audience shouted out a request for “Ophelia,” to which she replied you’ll need to come to the Last Waltz if you want to hear those songs.

As an aside, Kathleen mentioned she hopes she isn’t asked to sing “Coyote,” which is one of her least favorite Joni Mitchell songs. She shared how she got to back up the legendary artist at Toronto’s Massey Hall on “Woodstock,” during a time in which Joni wasn’t really making appearances, as she was struggling with health problems. Before the show, Kathleen smelled tobacco smoke backstage and thought a member of someone’s crew was smoking, only to discover it was Joni.

The stage banter throughout the show was lively, highlighted by a story about opening for Last Train Home many years ago at the now-shuttered Iota. She had a very vivid memory of a strange man in the window, which she acted out with vivid facial expressions and mime work that you just have to see.

The show continued with “Mercury” and “Options Open,” as well as “Hard On Everyone,” which was written in the aftermath of an abusive relationship.

Stream “Hard on Everyone” by Kathleen Edwards on YouTube:

Kathleen ended the main set with the title cut of her third album, 2008’s Asking For Flowers. A standing ovation brought Kathleen and her band back to the stage for an encore. Introducing “Copying Keys,” she said, “I don’t get to play this song when Colin’s not here.” She gave a disclaimer before playing the evening’s final number, “Back To Me,” saying that it was written nearly 20 years ago, and that some things in the song haven’t aged ideally.

With regard to the line “My daddy is coming for you,” she noted that her familiar is now 75 years old and has a bad knee, and he will not be coming for anyone. I know that I slept better last night having been given this reassurance, though I had always assumed this was metaphorical, rather than a reference to her actual biological father. Goes to show what a smart guy I am!

I’d seen Edwards before, in the first slot at last year’s Outlaw Festival, but she only got 30 minutes to play there. She has so many great songs, and it was a delight to get to see her do a full-length set for a devoted audience of her fans. While she admitted she colors her hair now, it’s what inside that counts, and with her sharp wit and dazzling personality, she’ll always be a redheaded flamethrower.