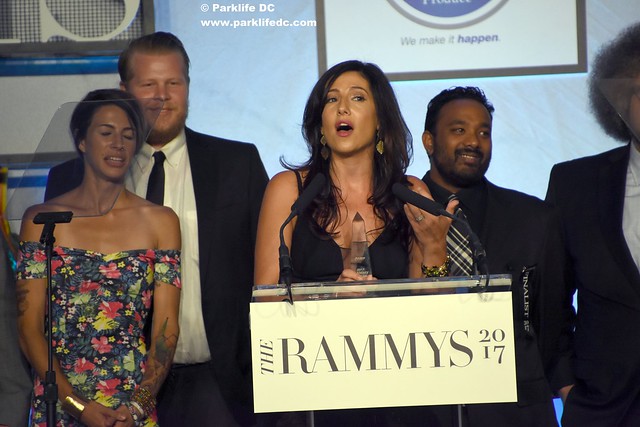 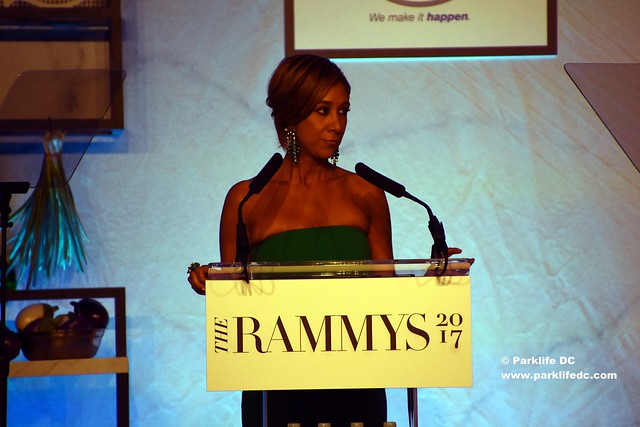 But first Kathy presented the Duke Zeibert Capital Achievement Award, a lifetime achievement of sorts, to Ashok Bajaj, owner of the Knightsbridge Restaurant Group, which operates DC institutions such as Rasika, The Oval Room, Ardeo, Bindaas, and others. 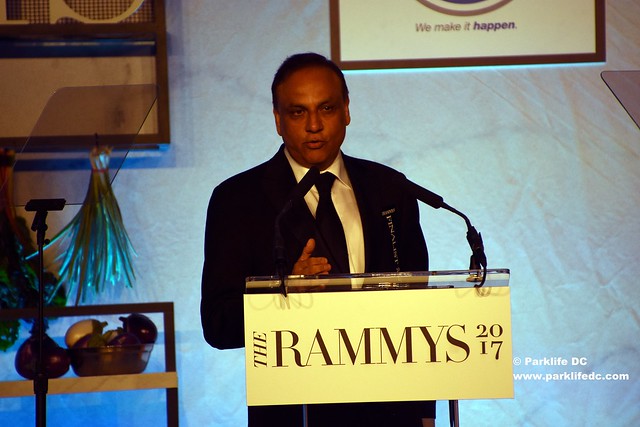 Ashok struck a humble chord, thanking his staff, diners, and the city for the support his restaurants have received since he started out in 1988. A parade of fellow winner recipients echoed his gratitude and humility. Here are the award winners in the 20 primary RAMMY Awards categories (in reverse order of presentation to put the top awards at the beginning).

Chef of the Year: Tarver King, The Restaurant at Patowmack Farm. 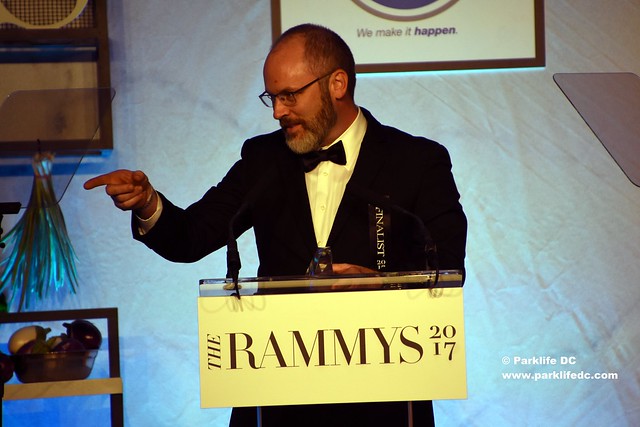 Scott Drewno, formerly of The Source by Wolfgang Puck, RAMMYs 2016 Chef of the Year, presented the award to Tarver. (Scott left The Source on April 30 to open Chi Ko in Barrack’s Row.) 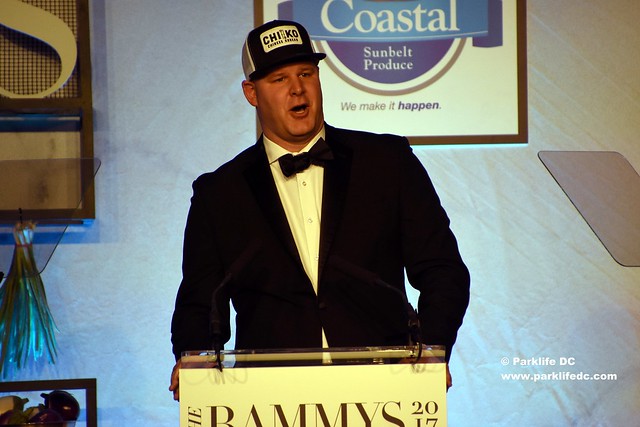 Tarver has pioneered homegrown ingredients for the past decade, helping to put the Restaurant at Patowmack Farm (42461 Lovettsville Rd., Lovettsville, Virginia) on the map. 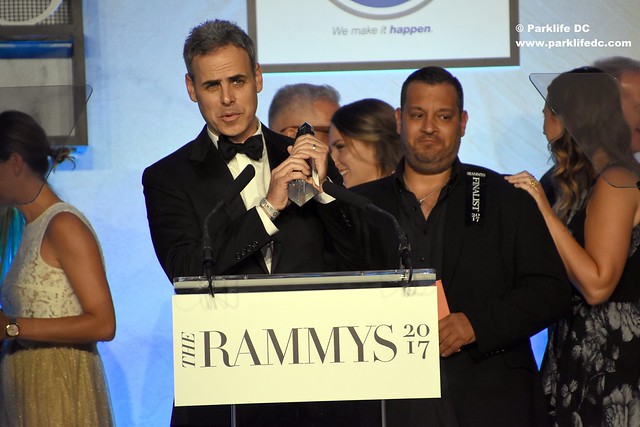 Cava Group Inc. proved the biggest winners of the night in some respects as CEO Brett Schulman led a second procession to the podium at the end of the ceremony to collect for Cava and its modern take on Mediterranean dishes. The chain now numbers 19 fast casual restaurants.

New Restaurant of the Year: Hazel 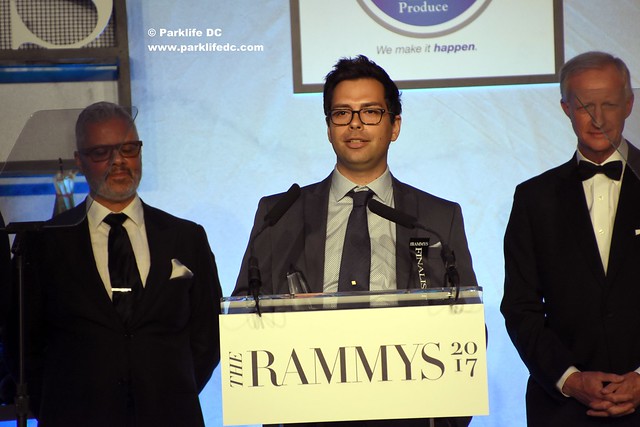 Chef Rob Rubba and Hazel (808 V St. NW, DC) has proven very popular since its opening, and apparently it is a hit with critics as well as diners.

Service Program of the Year: The Source by Wolfgang Puck 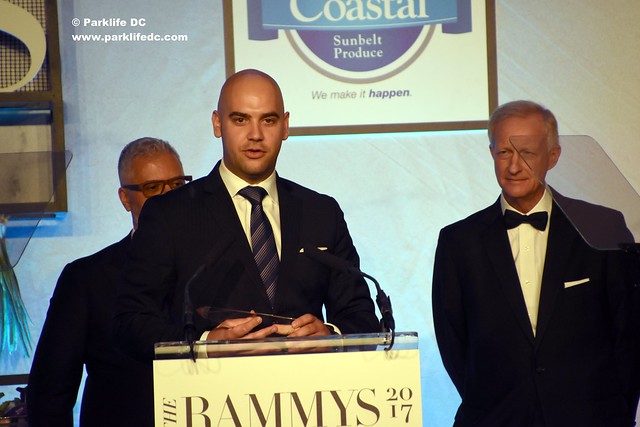 The staff of The Source (575 Pennsylvania Ave. NW, DC) are renowned for their hospitality and outstanding service. 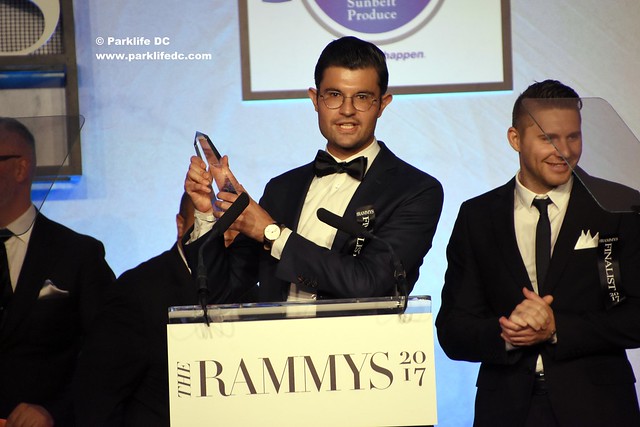 It was little surprise that the staff at minibar collected the award for the Formal Fine Dining Restaurant of the Year, as the raves about the institution specializing in molecular gastronomy has continued to grow in reputation since its founding. Although José Andrés himself was not on hand, his managers represented minibar well in his absence. 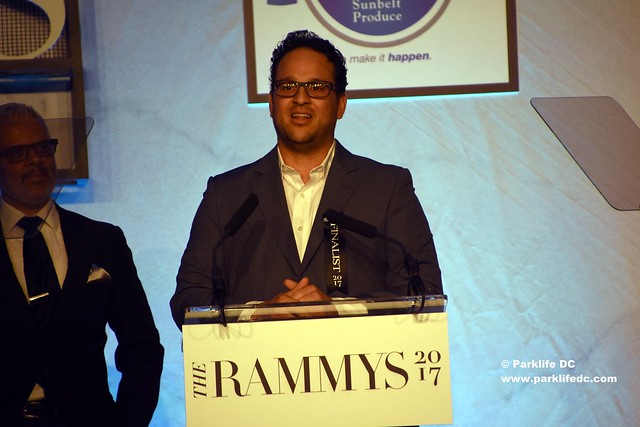 Nicholas Stefanelli’s Italian restaurant (1340 4th St. NE, DC) has received consistent buzz since its opening, and apparently desserts are a big part of the reason for that. Jemil Gadea, Masseria, take a bow. 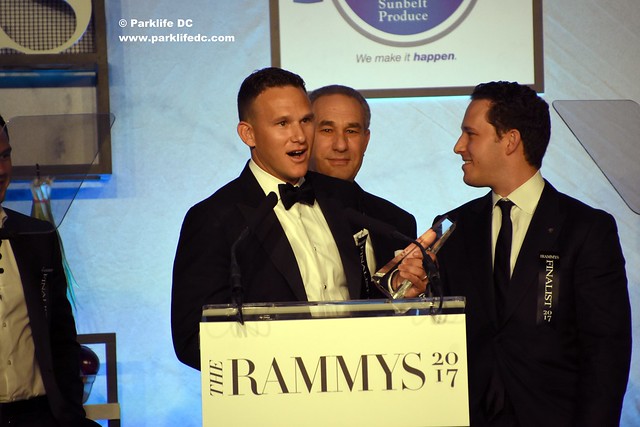 After the award announcement, a video presentation gave us the story of the Attman family and their three generations of owning and operating Acme Paper & Supply, underscoring that a great many Washington restaurants have worked with their friends in Savage, Maryland, over many years. 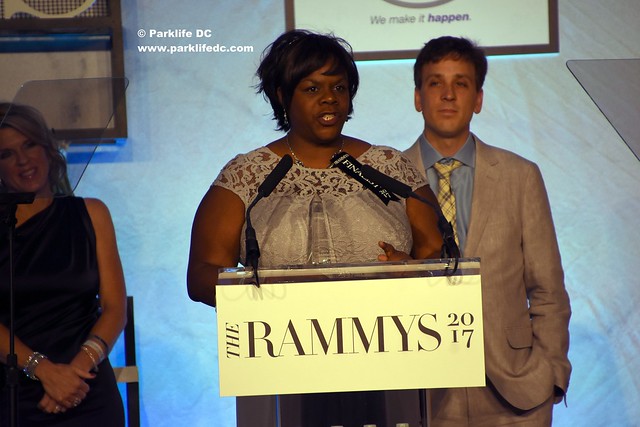 Sommelier Nadine Brown of Charlie Palmer Steakhouse (101 Constitution Ave. NW, DC) accepted the award on behalf of the program. The RAMMY Award falls on the heels of Charlie Palmer’s win of *eight* Wine Spectator Awards nationally only weeks ago, so the RAMMY wasn’t a surprise to those who have been paying attention. I guess we know where to go if, like me, you appreciate a bit of Bordeaux to wash down your filet mignon.

Cocktail Program of the Year: Kapnos by Mike Isabella 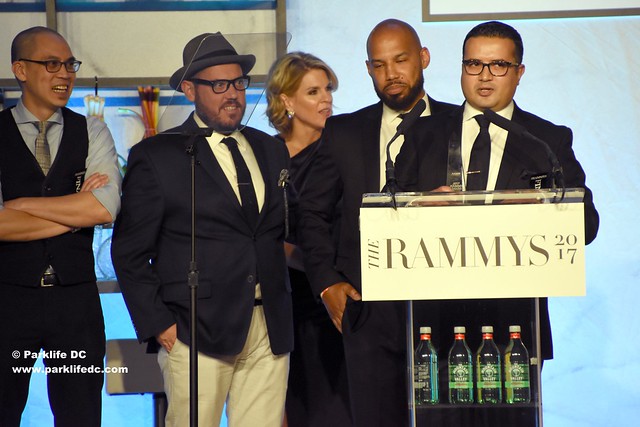 Kapnos by Mike Isabella (2201 14th St. NW, DC) is one part of a big empire that Mike has built since landing in DC with Graffiato. Beverage manager Taha Ismail keeps the cocktails flowing at Kapnos, where the Mediterranean-inspired drinks pair well with the Greek cuisine. 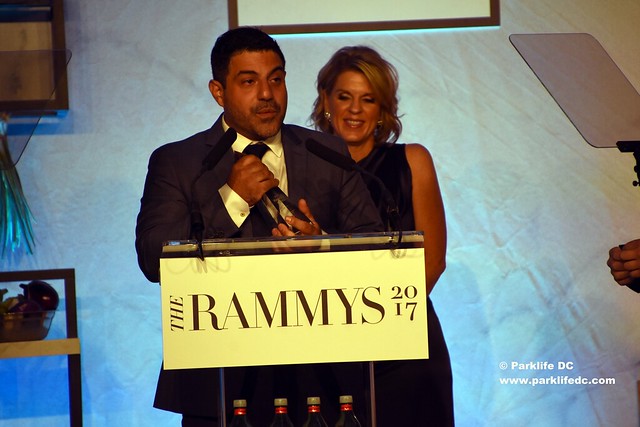 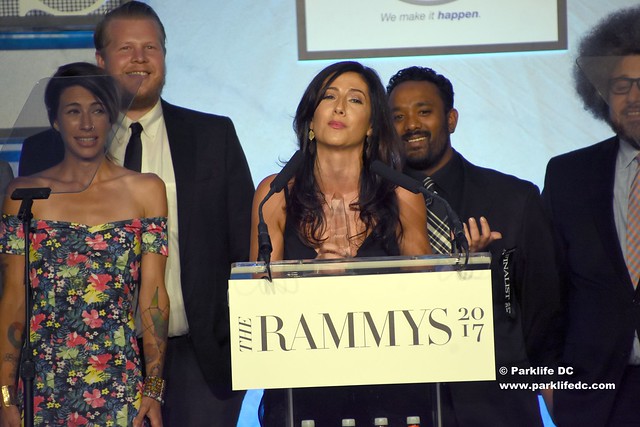 Few wins were cheered as hard during the awards ceremony than the win by Rose Previte and her restaurant Compass Rose (1346 T St. NW., DC), which took honors for Best Casual Restaurant. The international street food and unique drinks offered by the restaurant, along with its cozy interior, have made it a crowd pleaser along the crowded 14th Street corridor. 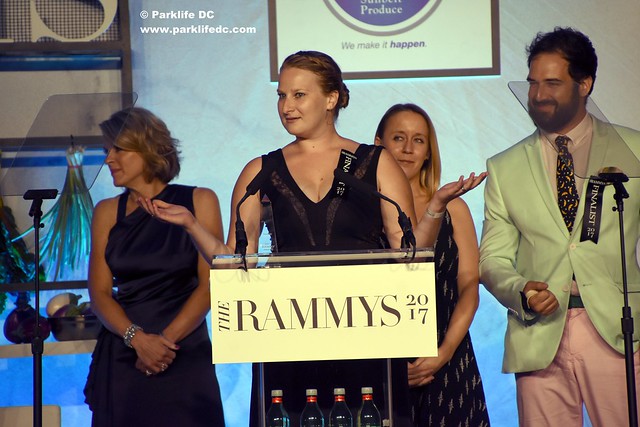 Proof (775 G St. NW, DC) has long been recognized for its wine program, and the restaurant as a whole has continued to win accolades as well. The Penn Quarter destination continues to charm with welcoming warmth. General Manager Morgan Fausett led the team that collected Proof’s award. 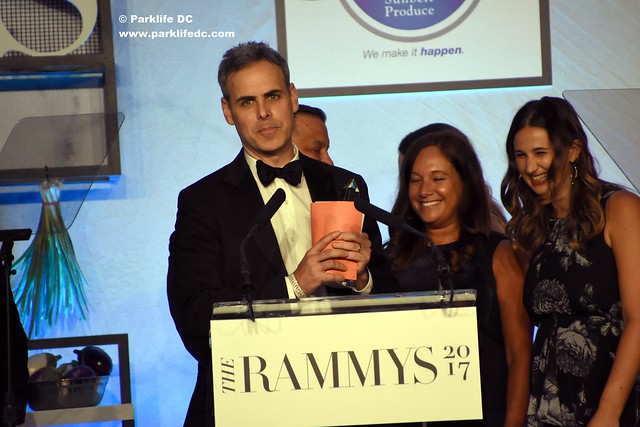 Cava Grill CEO Brett Schulman led his team to the RAMMYs stage for the first of two trips over the evening to collect the award for Favorite Fast Bites of the Year, one of four categories voted on by the public at large.

Casual Brunch of the Year: Republic 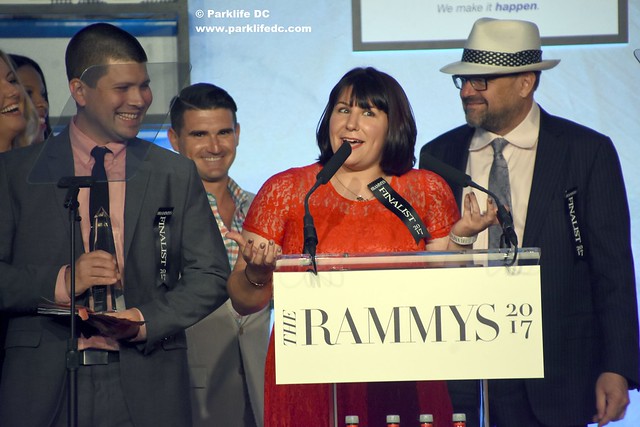 Republic (6939 Laurel Ave., Takoma Park, Maryland), part of the Black Restaurant Group, won honors as Casual Brunch of the Year, which was to be expected for the well-liked watering hole in downtown Takoma Park. Assistant General Manager Megan Rognrud led her team to collect the award.

Upscale Brunch of the Year: Convivial 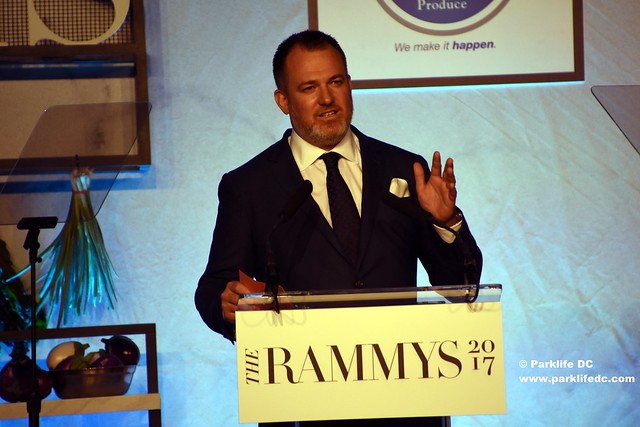 Chef and owner Cedric Maupillier of Convivial (801 O St. NW, DC) gracefully accepted the award for Upscale Brunch of the Year, another category open to voting by the public. Convivial, which pairs French and American cooking, has proven a consistently popular sibling to Mintwood Place in Adams Morgan. 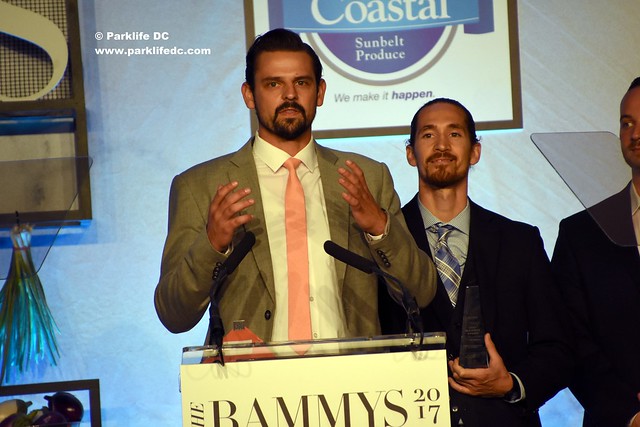 The Black Restaurant Group collected the first of two awards for the evening with Pearl Dive Oyster Palace (1612 14th St. NW, DC) and its win for Favorite Gathering Place of the Year (although it was of course represented by a different team than Republic). The spacious oyster house was a strong contender for such an award, given how the open layout of its bar area allows diners to lounge on an outdoor patio along the sidewalk as well as inside the nautically themed restaurant. 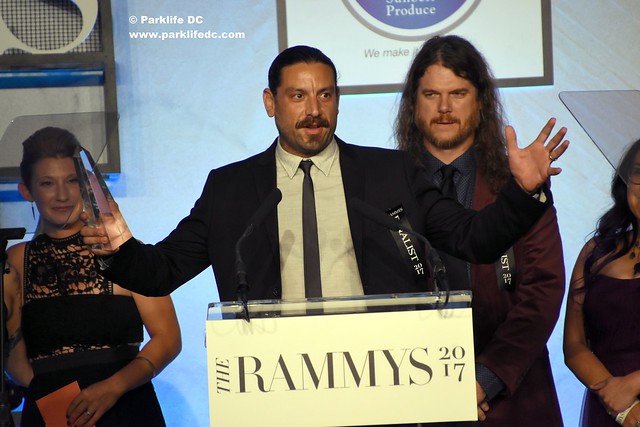 Brandon Skall, business manager, and Jeff Hancock, brewmaster, swept the room with charm and style as they accepted recognition for Regional Food and Beverage Producer of the Year for their brewery DC Brau (3178 Bladensburg Rd. NE B, DC). Brandon and Jeff of course ended a dry spell of production breweries actually located in DC when they opened the doors to DC Brau in 2011, and local restaurants have benefitted from their innovative craft beer offerings ever since. 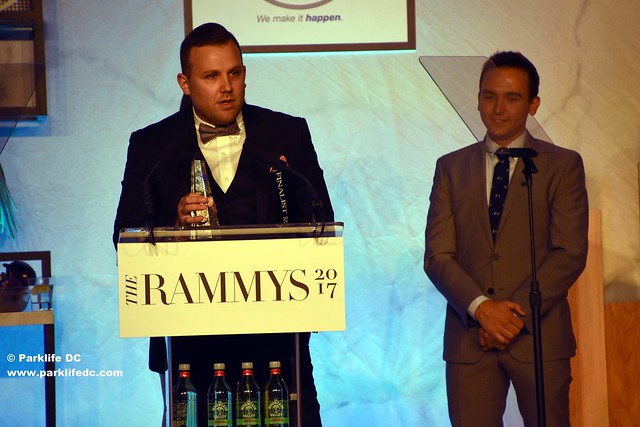 Manager of the Year: John Grace, The Hamilton 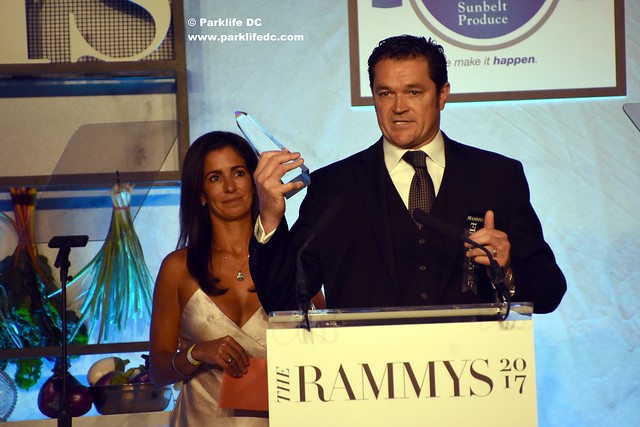 John Grace joined the opening team of The Hamilton (600 14th St. NW, DC) in 2011 and earned a promotion to general manager in 2014. As part of the Clyde’s Restaurant Group, surely a lot goes into the making of a restaurant and theater experience such as The Hamilton, but it is almost as if you can feel John’s gentlemanly congeniality throughout the restaurant’s walls when you visit. 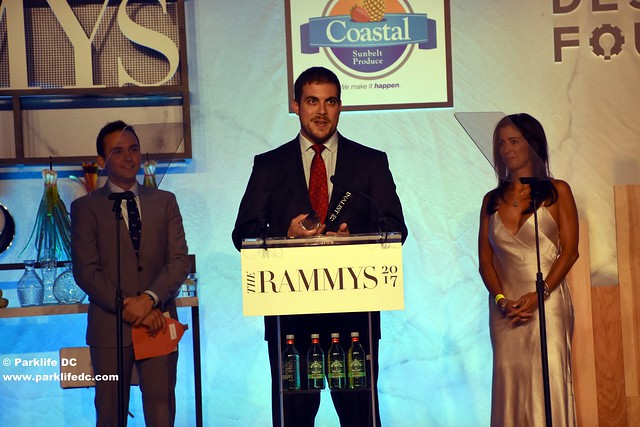 The first award of the evening, and the last upon which we report here, went to Joseph Cassis, who runs the bar program at PassionFish (7187 Woodmont Ave, Bethesda, Maryland), a seafood restaurant with Asian influences established by Jeff Tunks in bustling Bethesda Row.

For more information on the Restaurant Association of Metropolitan Washington and the RAMMY Awards, visit http://www.ramw.org.