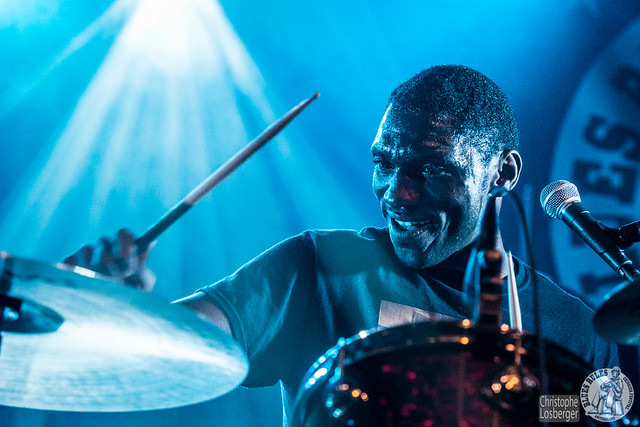 Cedric Burnside performs at Blues Rules Crissier Festival in Switzerland on May 22, 2016. (Photo by Christophe Losberger)

The blues, one of America’s great contributions to the arts, come in many forms. Multi-instrumentalist Cedric Burnside plays hill country blues, so named for the hill country of northern Mississippi. And he played them sure and well at Pearl Street Warehouse recently.

Cedric followed his joke with two of his older songs and a guitar solo from a third. He apologized for cutting it short, but he said he had to fit in everything, including the new stuff. Cedric released a new album this year, Benton County Relic. Brian J (of the Joytown Pimps) came out with an electric guitar to accompany Cedric on the slow-burning “Hard to Stay Cool.”

After “Hard to Stay Cool,” Cedric switched to an electric guitar, and Brian went to the drums.

A couple of songs later, Cedric played the song I found most powerful on the new record, “We Made It,” about growing up in rural Mississippi — in the 1980s. Cedric’s family didn’t have running water. He sings “didn’t have a toilet, didn’t have a bathtub, had to walk three miles, just have to water for another day.”

Cedric followed “We Made It” with “Typical Day,” a song about a typical as a musician. It turns out a musician spends a lot of their day, when they aren’t on tour, waiting for the phone to ring.

Best known as a drummer, Cedric once drummed for drummed for Jimmy Buffett and Widespread Panic. From 2010-2014, he won four consecutive Blues Music Awards as Best Drummer. And so, Cedric took over on the drumkit for the last leg of the show. During this part of the show, Cedric let Brian take over on lead vocals.

Cedric is definitely all about the music. And it’s damn fine music, too. Make sure to see him, and feel the groove!