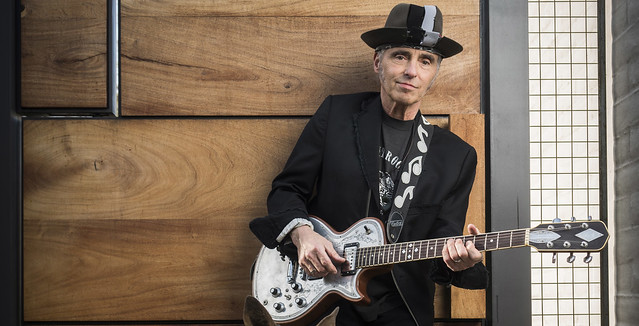 Neil Young & Crazy Horse. Bruce Springsteen & the E Street Band. Nils Lofgren has achieved iconic status — and induction in the Rock and Roll Hall of Fame — playing with these legendary acts, but as he came out a house of fire on “Walkin’ Nerve,” he left no doubt that he is one hell of a rock star in his own right. The Maryland native made a recent homecoming among family, friends, and a packed house, on the first of two nights at The Birchmere.

Continuing his set on May 21, Nils dialed in the swamp-funk for “Daddy Dream,” which he said is on one of his favorite albums, Wonderlands. After the band finished playing, Nils brought up his recently released album, Blue with Lou, which includes several songs co-written with the late Lou Reed. For the song “Give,” Nils composed the music and sent it to Lou, who wrote the lyrics. Nils remarked that there’s “never been a better time to give.”

Between songs, Nils joked about not playing with a band for 17 years, a bit of ironic humor that I took to mean “his own band” versus other people’s bands. He grabbed a bottle of water and said that he used to down alcohol between songs, but at his age, 67, hydration has become important.

At one point struggling with his guitar setup, Nils distracted the crowd with some banter. (Impressively, not only did Nils sing lead vocals and play lead guitar, he had no rhythm guitarist. I couldn’t see his hands, but it stands to reason he must’ve been playing both parts.) Nils said that young guitar enthusiasts would try to figure out what pedal Jimi Hendrix was using; if they could figure out what he pedal he used, they still couldn’t get it to sound like Jimi.

Nils regaled the crowd with more Lou Reed stories. Lou, for the all the legends about being him an odd duck, had some very conventional traits. He loved football, especially the Dallas Cowboys; Nils watched a Cowboys-Redskins game with Lou.

But just went Lou started to seem normal, Nils gave us twist the of the story: He woke up at 4:30am one morning to a ringing phone. Lou Reed was on the line. Lou had listened to the tape Nils had sent him, and he had finished writing lyrics for all 13 tracks. He was ready, just then, to dictate them all to Nils. Nils, who seems like a far more patient man than me, put on a pot of coffee, and they got to work.

Stream Blue with Lou by Nils Lofgren on Spotify:

“Don’t Let Your Guard Down” tells the story of a special forces ranger coming back to the United States. Nils went acoustic for “Too Blue to Play.” He mentioned that all of his brothers were in the house, and that he’s doing 19 shows in 24 days. For a guy with two artificial hips, Nils doesn’t take it at all easy.

Nils wrote “Tender Love” for the soundtrack to Breathe, which he called a “strange, dark movie.” He said they want a blues soundtrack, and dedicated the song to producer Greg Lugans. Nils mentioned that “Big Tears Fall” was recorded on both his Acoustic Live and Flip albums. The title of the latter comes from the flips that Nils, a former gymnast, used to perform onstage. Cyndi Mizelle, a backup a singer who also performs with the E Street Band, took the lead here.

Nils switched instruments with his brother Tommy, who was playing the keys, for “Going Back.” They traded back for “Like Rain,” a song that Nils wrote for his band Grin when he was 17. Nils said that he “tapped into something more mature” with this song.

Before the next song, “Rock or Not,” Nils praised his wife Amy, who is “a fierce part of the resistance.” He said that “for thousands of years, men have run everything. I’m so, so sorry.” He suggested that the pressure of failure would be so great, you’d think we’d just want to hand it over and go watch football.

To close his set, Nils and the play launched into a rocked-out “Papa Was a Rolling Stone,” leading into his “I Came To Dance.” A disco ball lit up the concert hall, and the crowd joined sang along on “doo-wop.” Nils played the longest of his many substantial guitar solos. His set may have only contained a dozen songs and an encore, but it didn’t run short at all. A great guitarist needs technical skill, and Nils has plenty of that, but they must also have creativity with their instrument. Nils is the kind of creative guitarist whose solos can stretch a song without making it feel long.

A well-deserved standing ovation led an encore that showcased Nils’ range and brought about a Lofgren family reunion. His brother, Tommy, had been playing keys the whole evening, and he introduced his other brothers, Mark and Mike, who joined him for the encore. Nils began with a classic country tune, Hank Williams “Mind Your Own Business.” You might hear his “No Mercy” on a classic rock station. After “Shine Silently,” the audience rose to its feet again, recognizing Nils’s considerable talents.