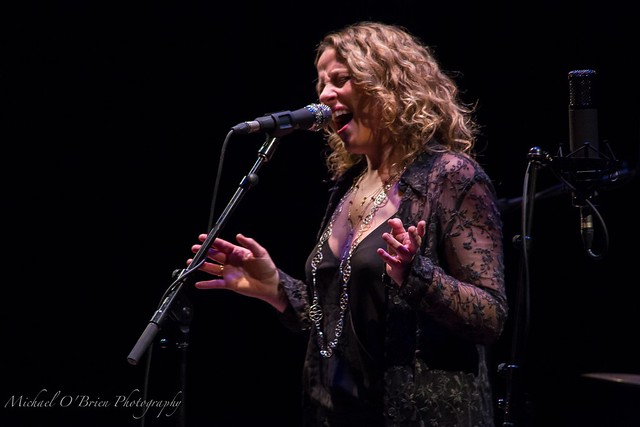 Amy Helm performs at the Paramount Theatre in Rutland, Vermont, on Nov. 21, 2014. (Photo by Michael O’Brien)

When you see Amy Helm perform, you believe that she’s taller than she actually is. Amy performed with livewire energy, and she carried herself with the regal stature of trueborn rock royalty in her show at AMP by Srathmore recently. She felt the spirit, and it moved her body.

It’s not just that her father — Levon Helm, the drummer for The Band — was a rock legend. One can see that Amy has the same strength and dignity that Levon displayed toward the end of his life, when he made a brilliant comeback, winning three Grammy Awards — projects that Amy was heavily involved with.

Amy’s gravitas also comes from being a veteran performer who’s worked with many top names. In addition to her father, she’s provided vocals for Donald Fagen of Steely Dan and Joan Osborne, to name a couple. She performed for more than a decade with the critically acclaimed band Ollabelle, and her two solo albums have been equally praised. She plays several instruments; when performed she with Luther Dickinson and the Sisters of the Strawberry Moon in March, she played the mandolin and the drums.

At AMP, Amy performed with a four-piece backing band: guitar, drums, bass, and keyboard. Two members of the trio comprising the opening act, Restless Age, played the bass and the keyboard.

Amy began her set singing a tribute to “Odetta,” a singer known as “The Voice of the Civil Rights Movement,” who Martin Luther King, Jr. called “The Queen of Folk Music.” Amy danced and swayed and clapped her hands, nimbly picking up and plugging in her mandolin as the song wound down. She led into “Cotton,” with a mandolin intro, before the rest of the band kicked in.

The gospel style of the title cut of Amy’s first solo album, “Didn’t It Rain,” brought some in the audience to their feet. The crowd applauded a searing guitar solo, and Amy got them to go “Woo!” By the end of the song, they were applauding, again, enthusiastically.

From what I can determine, Amy has not released a recording of “Cotton and the Cane,” a folk song in the tradition of her father and what Greil Marcus calls “the Old Weird America.” She sings of “hard times and broken noses,” of the plight of the “sharecropper’s son,” conjuring up a place not far yet utterly distant.

Amy moved and grooved to the R&B rhythm of “Rescue Me.” She picked up in the mic in her right hand, then put it down to dance between lines.

Joe Henry, the producer of her latest album, helped her pick out several covers in addition to her original songs. One of these, “River of Love,” was written by T Bone Burnett, best known as the Grammy-winning producer of music for several films, including O Brother, Where Art Thou? (2000), Cold Mountain (2004), Walk the Line (2006), Crazy Heart (2010). Amy told the audience she believes “There’s a river of loves that flows through all time.” Her guitarist played a Rickenbacker 12-string guitar on the song, creating a jangly sound.

Amy played another cover, Rod Stewart’s “Mandolin Wind,” followed by a song she co-wrote with Byron Isaacs of Ollabelle, who she mentioned is currently touring with the Lumineers. Amy and two of her fellow musicians gathered around a single mic for “Deep Waters.” The bassist played an acoustic guitar, the keyboard player an accordion.

Amy took things a little blue with Muddy Waters “by way of Mose Allison,” singing “I Love the Life I Live.” The audience sang along to the chorus — the title of the song — and snapped their fingers. Amy introduced her drummer, and next up was “This Too Shall Light,” the original title track from her latest album.

Stream This Too Shall Light by Amy Helm on Spotify:

Alain Toussaint wrote “‘Freedom for the Stallion’…a really long time ago, but [it’s] never resonated more deeply.” Amy described the song as a “prayer for peace,” and said, “this country needs a prayer for peace.”

After some piano boogie-driven funk, the band got wild with the rock ’n’ roll of “Good News,” a stark contrast to the stately folk of the Milk Carton Kids’ Michigan. Amy closed her set with “She Don’t Love You,” which gave her drummer a chance to solo.

The audience gave Amy a standing ovation. For her encore, Amy sang “Gloryland,” a hymn that her father learned from Ralph Stanley. She dedicated it “to everyone you love that’s no longer with you.” Accompanied by Restless Age on harmonies and gathered around a single mic, they began the song a capella. When they finished, they were met with applause and another standing ovation.

In addition to Amy’s fantastic performance, the show also featured an “easter egg:” a fan spotted the strap on her mandolin and sees that it says “Lavon.” It seems that Northerners just couldn’t get his name right, so he went by Levon to make things simpler. (FYI: Spell-check recognizes Lavon, but not Levon!) There you go: highly entertaining and educational!

And highly entertaining it was! The concert was constant motion and change, change between styles. Amy shifted from rock to folk to gospel to blues, and there were hints of country. Like her father, she makes great American music that’s hard to label, but it’s damned fun stuff.