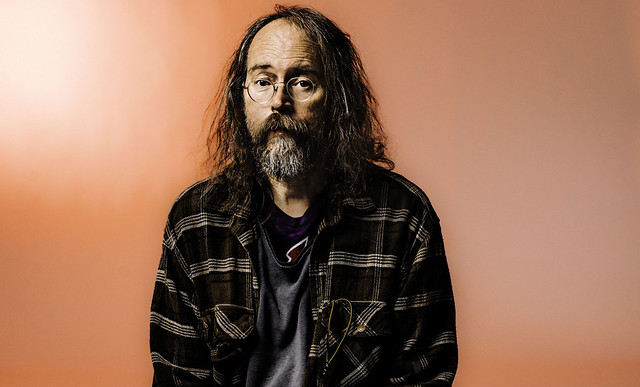 With a soulful voice and skilled resonator guitar playing, Charlie Parr recently held the crowd at the Black Cat at rapt attention. He briefly tuned his guitar before opening with the Ray Charles classic “C.C. Rider,” remarking, “We had a such a nice time on the way down, I thought this thing would be in better spirits.

On Oct. 10, Charlie proved that the blues, though native to the South, are played and appreciated well past that region. The native of Austin, Minnesota, who currently lives in Duluth, peppered his songs with local color. In “To a Scrapyard Bus Station,” he sang of the “tracks in the snow” left by a lost love. A couple songs later, in “1922 Blues,” he recalled how he “Met me a woman down in Saint Paul.” He also played “Badger,” about a member of that species — which is not found in the South.

Since his early teens, Charlie has battled depression, and he has survived multiple suicide attempts. As the title of one of his songs declared, “I Ain’t Dead Yet.” A mournful quality pervades his songs, even when those words come from the mouth of a character. In “Cheap Wine,” he expresses the existential dread of a liquor store owner. In “Remember Me If Forget,” from the album Stumpjumper, he asked, “Have I lived my whole life, For it to come down to this?”

A very shy individual, performing doesn’t come naturally to Charlie. “My regular discomfort with being onstage is not getting better,” he told the audience at Black Cat before playing “Over the Red Cedar.” He joked that his stage presence has been compared to a wet rag. Like many people who suffer from shyness and depression, Charlie is far too hard on himself.

In Charlie’s songs, the blues and folk music come together. Introducing the traditional “Duncan and Brady,” he said it had “all the elements of a good folk song.” Among those elements, he listed murder and shoeless women. Charlie recounted how he tried to learn the song from his hero, Spider John Koerner, but he couldn’t “figure out what he was doing.” Rather, his version hews closer to folk legend Dave van Ronk’s. Later, as he worked over his guitar, quipped that the other feature of a “folk music program, besides death and depression, is a lot of tuning.” There was plenty of death, though, as Charlie also shared his own “apocalyptic murder ballad,” in addition to a traditional one.

In true folk-blues fashion, hobos and their travels populate Charlie songs. In “True Friends,” he recounts the tale of former train hoppers “hauling down the road in the winter time, Riding on their thumbs but walking most of the way.” One of the songs Charlie shared with the crowd is simply called “Hobo” (he also has a tune called “Jesus Is A Hobo,” but didn’t play it Wednesday night.)

For his encore, Charlie belted the gospel song “Ain’t No Grave,” made famous by Johnny Cash on a later album of American Recordings, a Capella. His voice was warm and clear, delivering a message of hope.