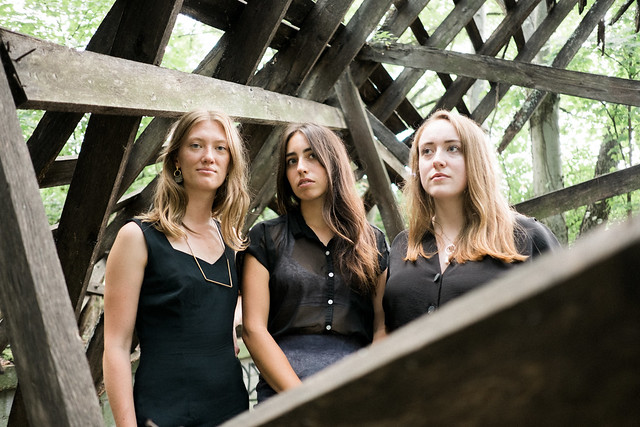 Folk trio Lula Wiles had something of a homecoming when they appeared at the Pearl Street Warehouse recently. As they explained, DC is the home of their label, Smithsonian Folkways.

Eleanor Buckland and Mali Obomsawim attended high school together, and they met Isa Burke at a camp in their home state of Maine. They later attended the Berklee College of Music in Boston together, and, in 2016, they self-released an eponymous album. They joined the Smithsonian Folkways label in 2018, and released What Will We Do earlier this year.

Except for one song on which she played electric guitar, Mali played bass at Pearl Street Warehouse on Nov. 17. Isa played both electric and acoustic guitar, as well as the fiddle, and Eleanor played the acoustic guitar and the fiddle. They were accompanied by a drummer.

The Lula Wiles are a strongly progressive band. Isa told the audience, “Someone said I write protest songs about American and relationships.” She wrote “Shaking As It Turns” as a response to the Neo-Nazi gathering Charlottesville. The song also tackles the climate crisis and the “the general complacency of so many people.” Isa admitted that she frequently slips into complacency and despair, which she argued are “two sides of the same coin.” We all, she said, “need to be more direct and radical in our pursuit of justice.”

As a member of the Abenaki tribe, the rights of Indigenous Peoples are of deep personal importance to Mali. She recently contributed the essay “This Land Is Whose Land” to Smithsonian Folklife magazine. Mali established a connection between this cause and the destruction of the environment, pointing out that (majority) white nations exploit the global south. She wrote “Good Old American Values” as a satire of the depiction of Indigenous Peoples in popular culture.

Stream What Will We Do by Lula Wiles on Spotify:

Being young people, relationships, and their ups and downs, come up frequently in the Lula Wiles’ songs. The first part of “Love Gone Wrong” came to Isa while she was crying in a bathroom. She dedicated the song to anyone who can no longer ignore the red flags that in a bad relationship.

Their origins in the Pine Tree State provide further sources of inspiration to the Lula Wiles. “Hometown” was described as a love letter to rural Maine, while the dark “Morphine” discusses the impact of the opiate crisis.

While they traded instruments for most of the evening, they delivered the title cut of their latest LP, What Will We Do?, a capella. They followed that by introducing “The Pain of Loving You” as “a song by the least divisive person in America, Dolly Parton.” Inviting out Louisa Stancioff and Matt Lohan of opening band Dyado, they covered Stevie Nicks and Tom Petty’’s “Stop Dragging My Heart Around.” Eleanor and Mali went to high school with Louisa, and they said that Sunday night’s show was like “our high school reunion.”

Sunday’s show was the world premiere of their new single, “You Only Want Me When You Need Me.” It was also the first time Mali electric guitar a live show. A clear theme ran through the single and its B-Side, “It’s Cool.” The latter was inspired by a text one of the bandmates sent to a guy that read, “It’s cool. Everything’s cool. We’re cool.”

The Lula Wiles came back for encore, and they sent the crowd home with, fittingly Lucius’s “Go Home” as an encore. This was true folk music, true people’s music, and a good time for all in attendance!

Find more music by Lula Wiles on the band’s website.